How does coverage affect financial security?

Health care costs can be a major burden for low-income families. While many newly insured adults report difficulty affording their monthly premium, they also report lower rates of problems with medical bills and lower rates of worry about future medical bill than their uninsured counterparts. However, newly insured adults still face financial insecurity: they are more likely than those who had coverage before 2014 to worry about future medical bills, and they face general financial insecurity at rates similar to the uninsured. These patterns may indicate that while coverage can ameliorate some of the financial challenges that low and moderate-income adults face, many will continue to face financial challenges in other areas of their lives.

Many Covered California enrollees report difficulty paying their monthly premium. Among adults who say that they pay a monthly premium for their health coverage, nearly half of newly insured adults (47%) say it is somewhat or very difficult to afford this cost, compared to just 27% of adults who were insured before 2014. When looking specifically by type of coverage, 44% of Covered California enrollees (not all of whom are newly insured) report difficulty paying their monthly premium, versus a quarter of adults with other types of private coverage. Medi-Cal enrollees do not pay monthly premiums for their coverage. Statewide, the average premium rate for the second-lowest cost silver plan in Covered California was $325 per month,1 compared to $226 nationally.2 While most people in Covered California received premium subsidies to offset some or most of this cost,3 subsidy levels are set at the federal level and do not account for the relatively high cost of living in the state that requires a greater share of family finances to go to other areas such as housing, food, or transportation.4 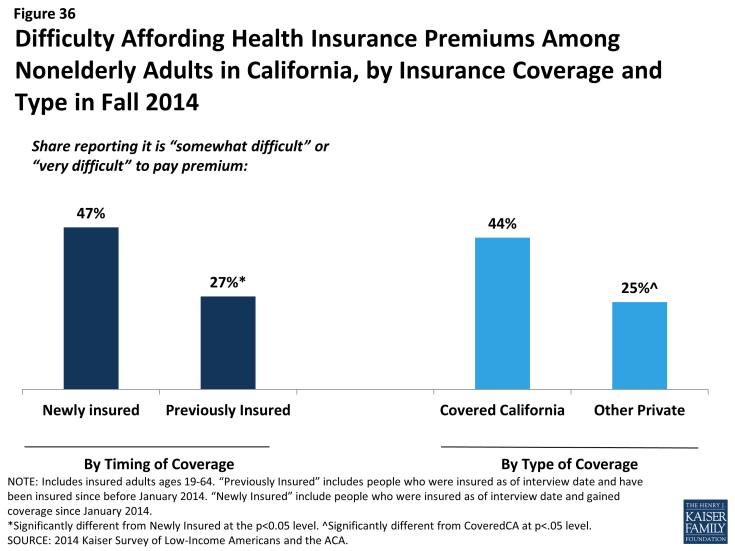 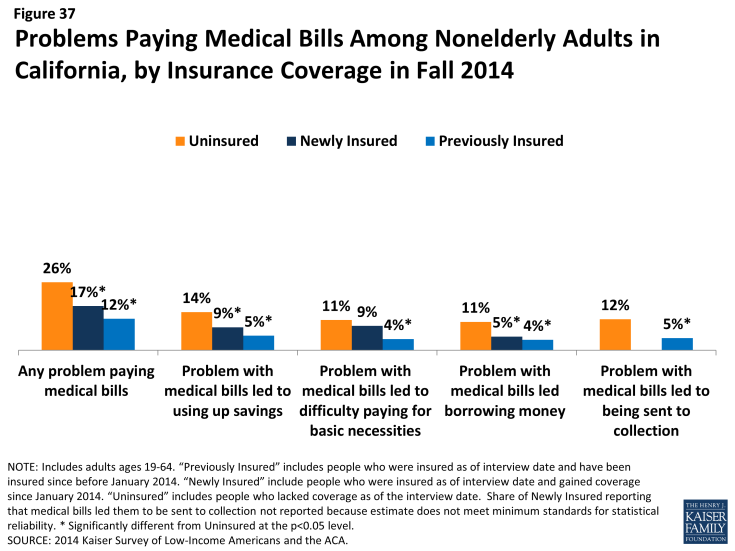 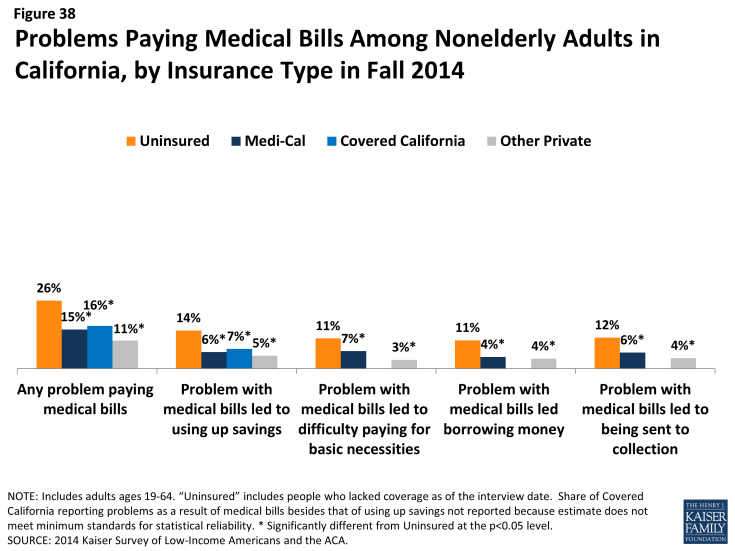 When comparing the uninsured to adults with different types of coverage, including Medi-Cal, Covered California, or other private coverage, adults with each type of coverage were less likely than the uninsured to report problems paying medical bills. However, likely reflecting differences in income between these groups, adults with Medi-Cal coverage were significantly more likely than those with other private coverage to report difficulty paying for basic necessities as a result of medical bills (7% versus 3%) and problems paying medical bills (15% versus 11%). As mentioned earlier, Medi-Cal enrollees pay nothing or very little for their medical care, so the share reporting problems related to medical bills may indicate confusion about their plan or services they received that are not covered by their plan. Compared to 2013, there was no significant change in the share of uninsured or Medi-Cal respondents reporting problems with medical bills.5 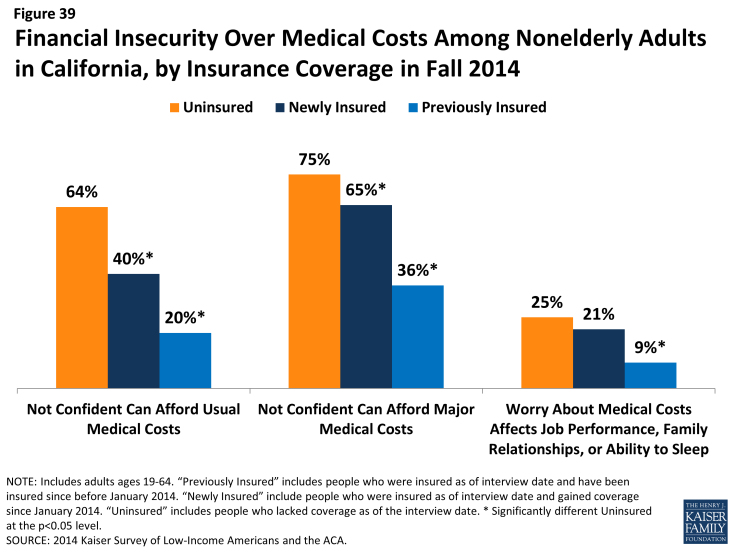 Figure 39: Financial Insecurity Over Medical Costs Among Nonelderly Adults in California, by Insurance Coverage in Fall 2014 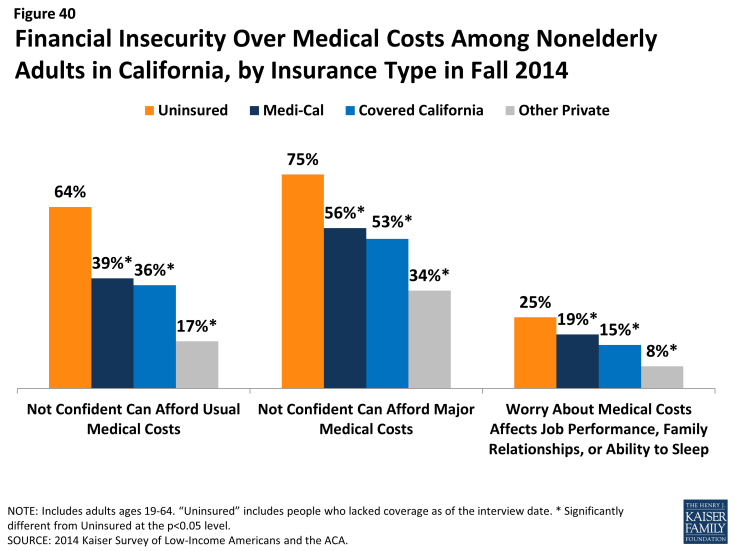 Figure 40: Financial Insecurity Over Medical Costs Among Nonelderly Adults in California, by Insurance Type in Fall 2014 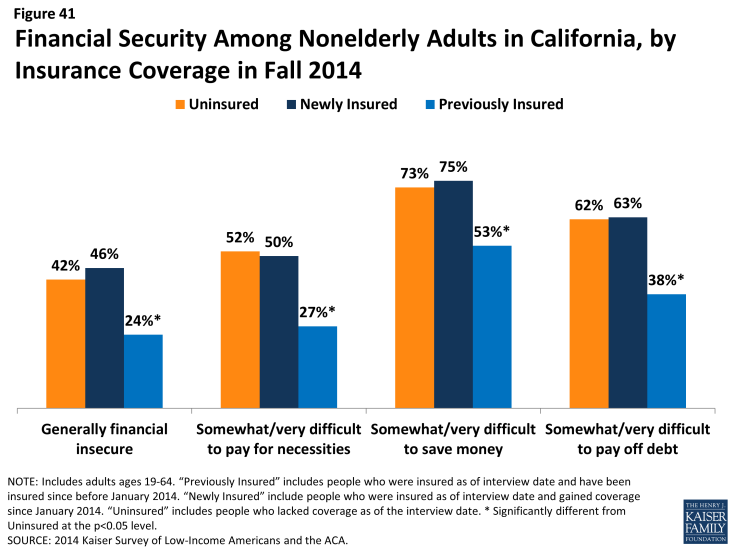 Figure 41: Financial Security Among Nonelderly Adults in California, by Insurance Coverage in Fall 2014 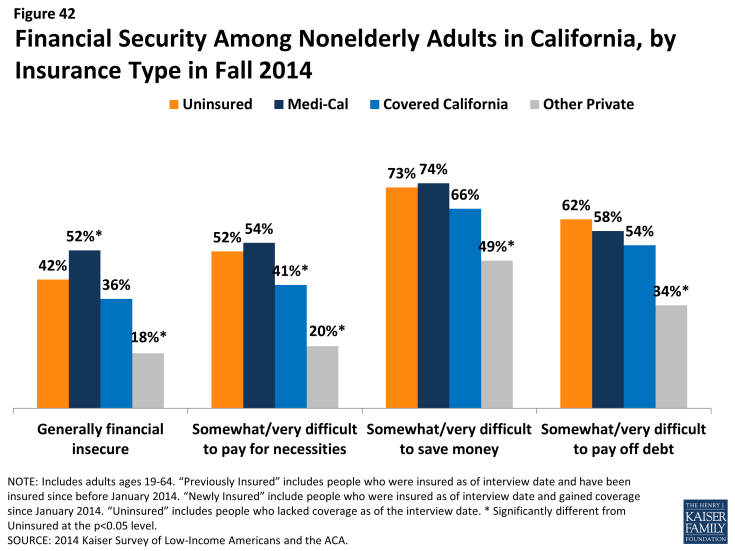 Figure 42: Financial Security Among Nonelderly Adults in California, by Insurance Type in Fall 2014

Looking by coverage type, Medi-Cal beneficiaries are more likely than the uninsured to report being generally financially insecure and as likely to report difficulty affording necessities, saving money, or paying off debt. This finding is not surprising, given that Medicaid is targeted to adults with the lowest incomes.