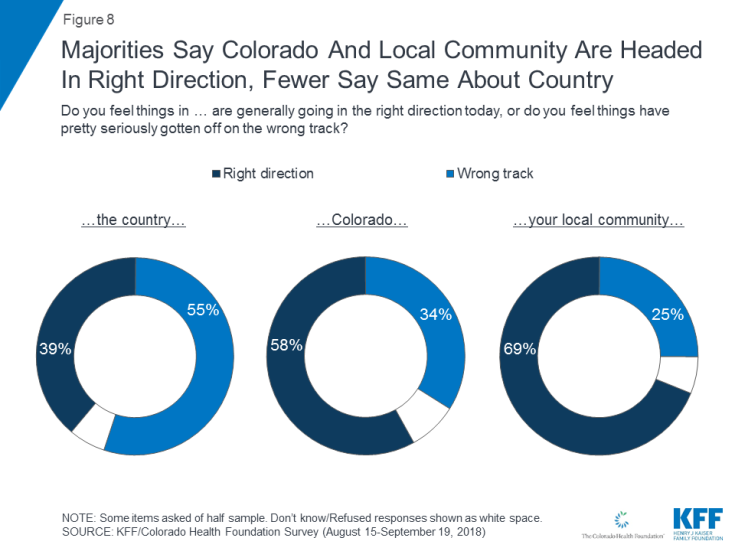 Coloradan’s outlook for their local community, state, and the country are largely driven by partisanship, with most Democrats holding a positive outlook for the state (67 percent) compared to about half of independents (52 percent) and Republicans (48 percent). Republicans, on the other hand, are more positive in their outlook for the country, with seven in ten (69 percent) saying things in the country, generally, are going in the right direction compared to one-third of independents (34 percent) and an even smaller share of Democrats (14 percent). Regardless of partisanship, about seven in ten Coloradans say things in their local community are headed in the right direction. 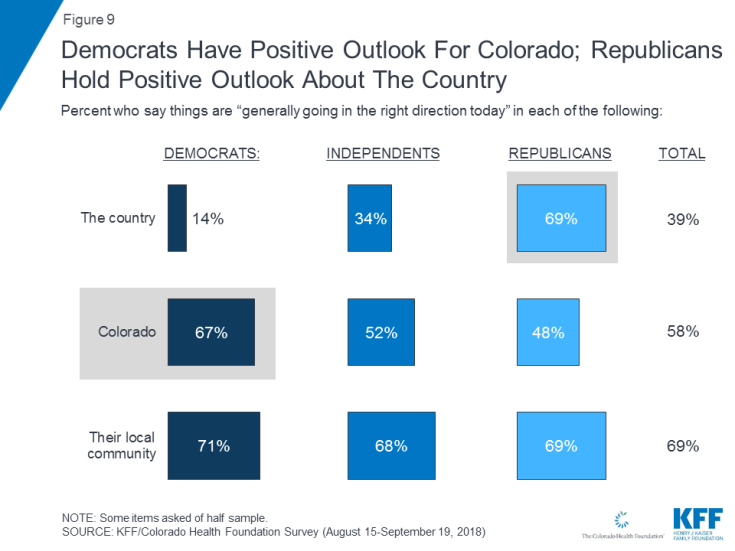 Recent reports have consistently ranked Colorado’s economy as one of the best in the country with an overall unemployment rate well below the national average.1 In fact, six in ten Colorado residents say the economy and jobs is one area where things in Colorado are getting “better” (including about three in ten who say it is getting “much better”) compared to 17 percent who say it is getting “worse.” On the other side, a majority of Coloradans say housing costs (80 percent), substance abuse (53 percent), and health care costs (55 percent) are issues that are getting “worse” in Colorado. In many areas including access to health care, education, hunger, mental health care, and crime, significant shares of Coloradans say things are staying about the same. 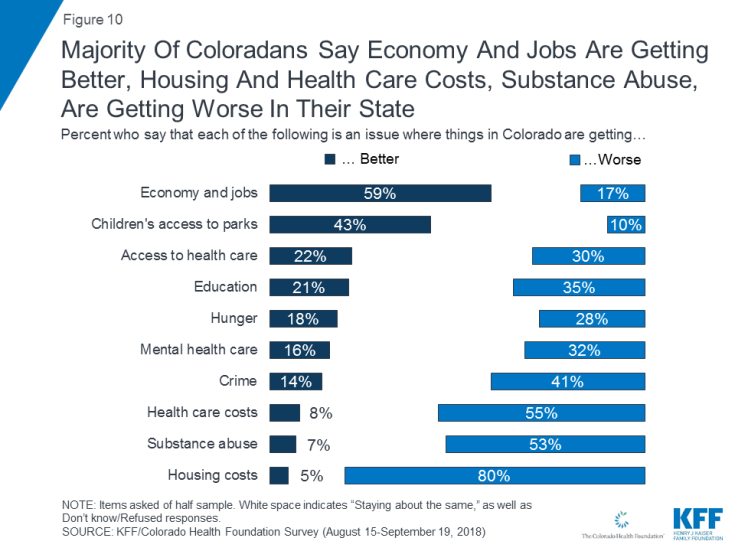 Figure 10: Majority Of Coloradans Say Economy And Jobs Are Getting Better, Housing And Health Care Costs, Substance Abuse, Are Getting Worse In Their State

Priorities for the State Government

When asked to say in their own words what is the most important issue facing people in the state, Coloradans offer responses touching on a wide range of issues including housing affordability (15 percent), economy and jobs (13 percent), health care (12 percent), environmental concerns (11 percent), and immigration and population growth (10 percent). 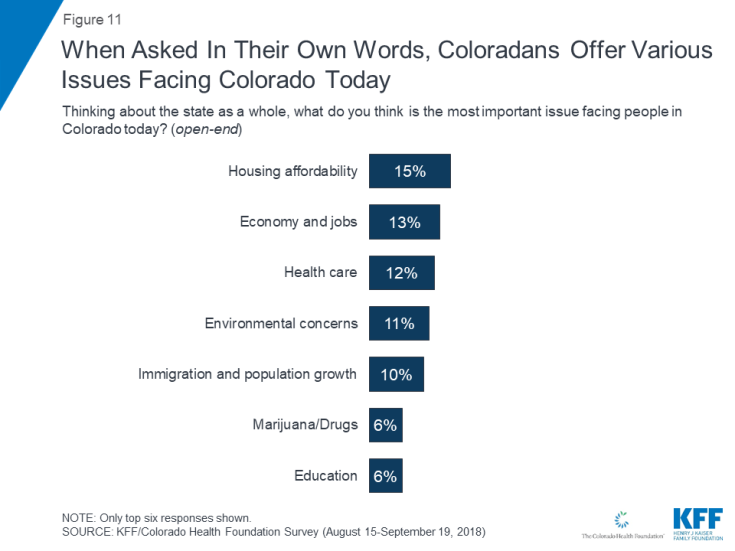 When asked about various things the state legislature might do within health care and other areas, all are seen as important by a majority of Coloradans, with health care affordability rising to the top of the list. Eight in ten Coloradans say lowering the amount individuals pay for health care is the “most important” or a “very important” issue for the state government to work. About seven in ten also say that it is at least “very important” for the Colorado state government to work on programs to make housing more affordable and on funding for mental health programs. Fewer, but still a majority, say the same about funding for programs to help people who are experiencing hunger (62 percent), substance abuse treatment and prevention programs (58 percent), programs to help children be physically active (52 percent), and passing a universal health insurance plan, in which all Colorado residents would get their coverage from a single state government plan (51 percent). 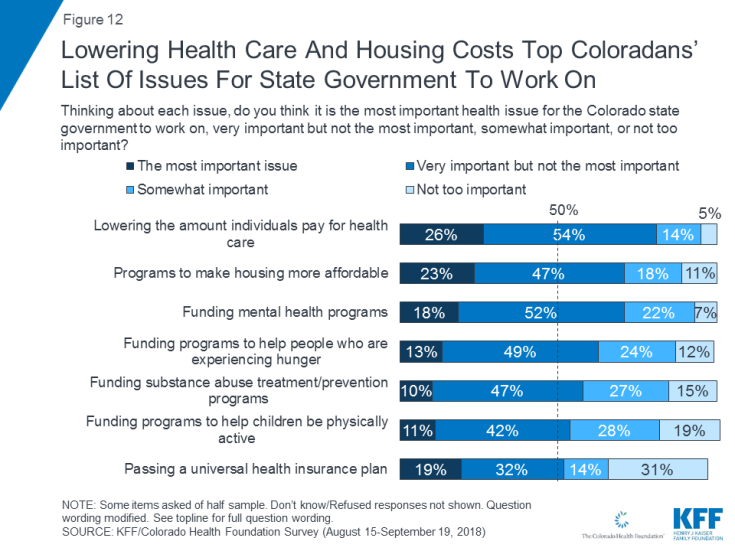 While there are differences in how partisans in Colorado view health care priorities for the state legislature, lowering the amount individuals pay for health care is the top health care issue among Democrats (33 percent), independents (26 percent), and Republicans (17 percent). Democrats also prioritize passing a universal health insurance plan (31 percent), while one in five independents (18 percent) say funding for mental health programs is “the most important health issue” for the Colorado state government to work on. Across most health issues provided, fewer Republicans say they are the “most important” for the state to work on. 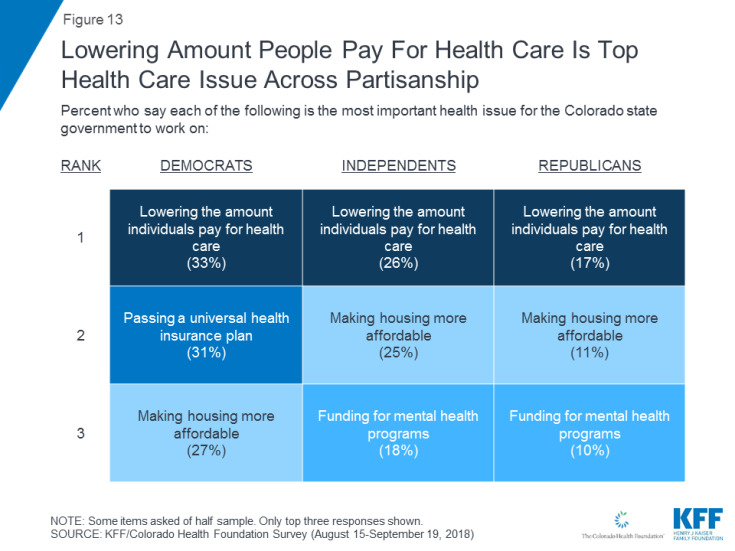 Lowering the amount individuals pay for health care ranks among the top issues for the state government to work on across demographic groups such as region2, race/ethnicity, gender, or self-reported income level. Notably however, half of Black residents (52 percent) say programs to make housing more affordable is the most important issue as do one-third of those earning less than $40,000 annually.

Section One: 2018 Midterm Elections Section Three: Quality of Life in Colorado and Affordability of Housing