Approximately 145 million nonelderly adults ages 19 to 64 in the United States worked in 2014. Nearly one in three of these workers (30%) were in families that earned less than 250% of the Federal Poverty Level (FPL), or $30,790 for an individual in 2014. Since the end of the Great Recession in 2009, real (inflation-adjusted) hourly wages have largely stagnated or fallen for low-income workers.1 Furthermore, the wage gap between the highest income workers and low-income workers has been widening over the past three decades.2 Prior to 2014, health insurance coverage rates for low-income workers had been falling, largely due to reductions in employer-based health coverage.3

The implementation of the Affordable Care Act (ACA) in 2014 created new coverage opportunities for workers who were not offered insurance by their employer. The expansion of Medicaid to nearly all adults with incomes up to 138% FPL in Medicaid expansion states and the availability of premium tax credits through the Marketplaces led to large gains in coverage, particularly among low-income adults.4 Medicaid has always been an important source of coverage for low-income families and children; however, eligibility rules in place prior to the ACA excluded childless adults from coverage. The elimination of these rules in states that chose to adopt the expansion increased Medicaid eligibility for low-income working adults.

Who are low-income workers? 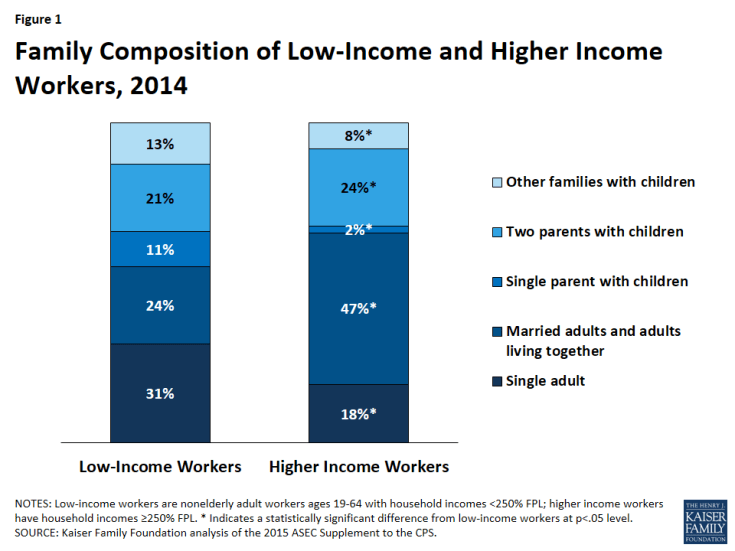 Low-income workers are more likely to be non-citizens than their higher income counterparts. Sixteen percent of low-income workers are non-citizens, compared to just 6% of higher income workers (Appendix Table 1). Immigrants, particularly recent immigrants, may face language and other barriers that limit their employment options which may lead to lower paying jobs that lack comprehensive benefits, including health insurance. Immigrants, particularly those who are not citizens, also face disproportionate barriers to accessing health coverage and care.5

How much are low-income workers working? 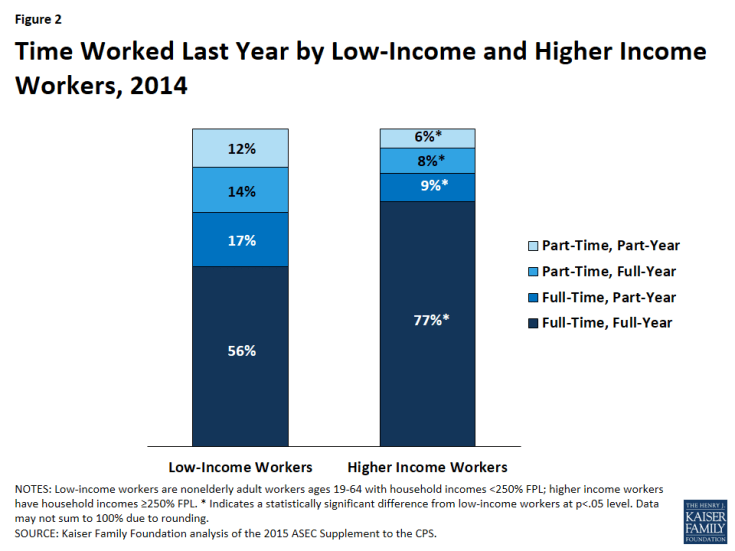 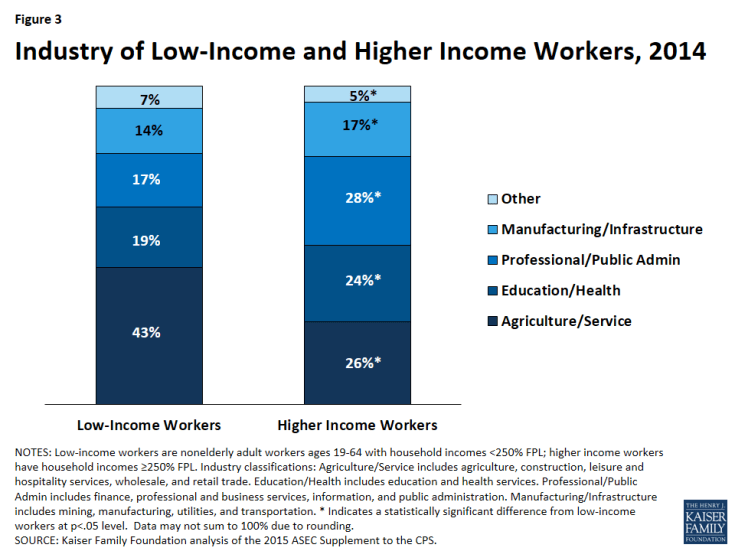 What is the health insurance status of low-income workers? 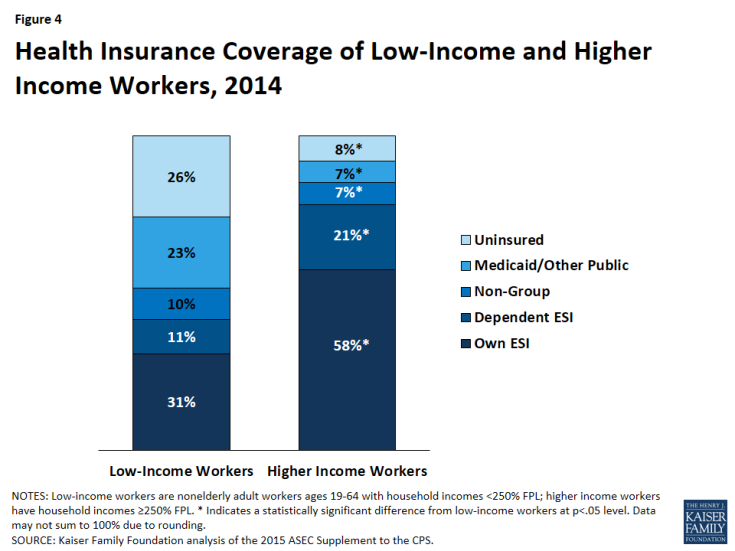 Under the ACA, employers with 50 or more full-time equivalent employees are required to offer health insurance coverage that meets minimum value and affordability standards to their full-time workers or pay a fine. These requirements were not in effect in 2014, but have been fully implemented in 2016. Coverage is deemed affordable under the ACA if the employee contribution for individual coverage for the lowest-priced plan offered is no more than 9.66% of the employee’s household income in 2016. Employees offered coverage that does not meet the affordability standard may qualify for premium tax credits to purchase coverage in the Marketplaces. However, if coverage offered by their employer meets these affordability standards, low-income workers are ineligible for premium tax credits to help pay for coverage in the Marketplace even if they perceive the employer coverage to be unaffordable to them. 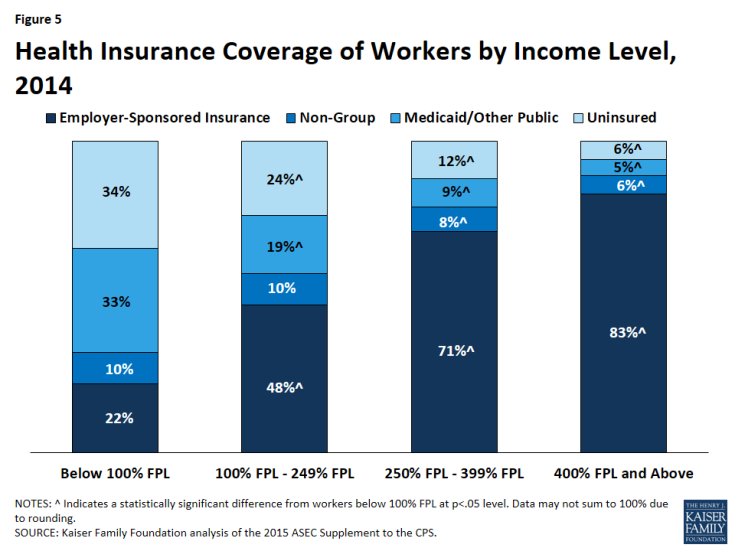 Following implementation of the ACA’s coverage expansions in January 2014, low-income workers experienced large gains in coverage. Under the ACA, health coverage was extended to individuals who did not previously have access to affordable coverage through an expansion of Medicaid to low-income individuals under 138% FPL ($27,310 for a family of three in 2014) and through premium tax credits available to individuals with incomes 100%-400% FPL who purchase coverage in the Marketplaces. While the Medicaid expansion was intended to be implemented nationwide, a June 2012 Supreme Court ruling essentially made it optional for states. As of 2014, 27 states (including DC) had adopted the Medicaid expansion.9 10 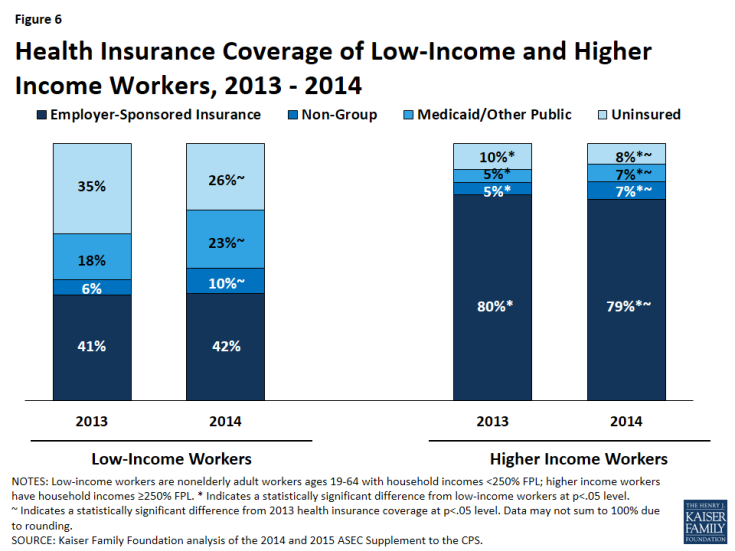 Low-income workers who live in states that have expanded Medicaid under the ACA are more likely to have health coverage than in than those who live in states that have not expanded Medicaid. In states that adopted the Medicaid expansion in 2014, the share of low-income workers covered by Medicaid or other public coverage increased from 22% in 2013 to 30% in 2014 (Figure 7). The percentage of individuals covered in the non-group market also increased from 6% in 2013 to 9% in 2014. These coverage expansions contributed to a decline in the uninsured rate in Medicaid expansion states from 31% in 2013 to 22% in 2014. 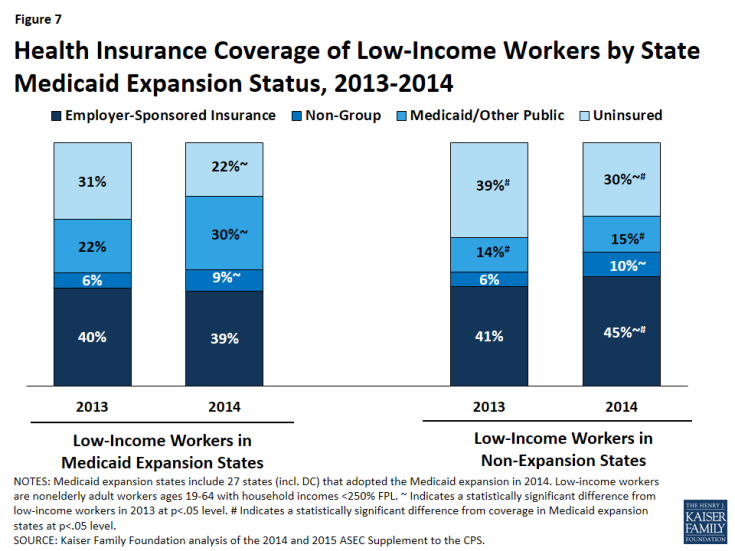 Over half of uninsured low-income workers are eligible for coverage either through Medicaid or subsidized Marketplace coverage. Among uninsured low-income workers, nearly one quarter (23%) are estimated to be eligible for Medicaid and three in ten (31%) are estimated to be eligible for tax credits in the Marketplace (Figure 8). For low-income workers in particular, outreach and education about available coverage options is important to build upon the coverage gains experienced by this population in 2014. Misperceptions about cost, lack of awareness of financial assistance, and confusion about eligibility rules were cited as barriers to some eligible uninsured individuals gaining coverage.11 Others reported that coverage was still too costly, even with the availability of financial assistance.12 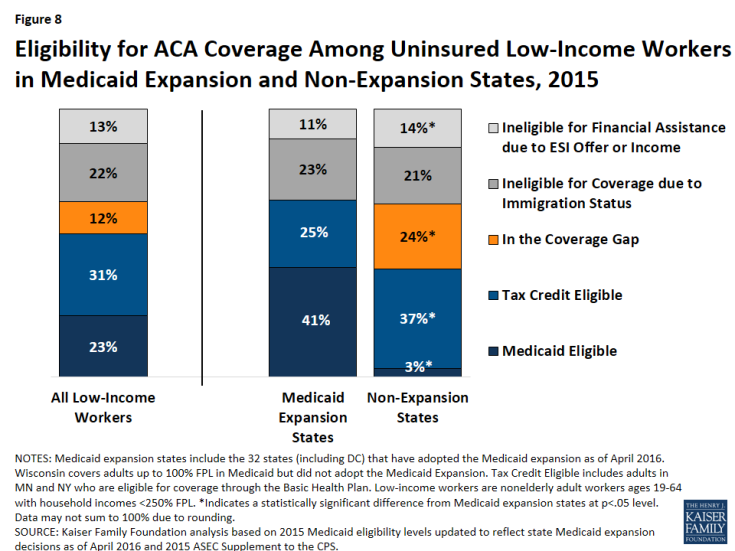 Another 22% of uninsured low-income workers are undocumented immigrants who are ineligible for ACA coverage under federal low. The remaining 13% are ineligible for financial assistance in the Marketplaces due to an offer of employer-sponsored coverage or due to income. These workers could purchase unsubsidized coverage in the Marketplaces; however, that coverage is likely unaffordable to them.

Given the differences between low and higher income workers in a range of demographic characteristics (including race, age, and gender), addressing the challenges that many low-income workers face in accessing health insurance could help to reduce existing economic and health disparities between demographic groups. Broadening coverage through the Medicaid expansion, combined with additional outreach and enrollment efforts targeted at this population and efforts to improve the affordability of existing coverage options, could help to connect the remaining uninsured to affordable health coverage throughout the country.