Since HHS issued the regulation regarding preventive services for women, over eighty corporations have filed lawsuits challenging the contraceptive coverage requirement. Some of these corporations are challenging the requirement that they cover the full range of contraceptives while others are contesting providing coverage for emergency contraception, finding it to be objectionable because they believe it is an abortifacient, despite its classification as a contraceptive by the FDA. The legal challenges fall into two groups: those filed by for-profit corporations and those filed by nonprofit organizations. More than forty cases have been filed by for-profit corporations and their owners who are claiming that 1) the requirement that they provide health insurance coverage for their employees which includes contraceptives violates their constitutional rights under the First Amendment to free exercise, speech and association, and 2) they have been unjustly burdened under the Religious Freedom Restoration Act (RFRA). Religiously affiliated nonprofit organizations are also making claims under the First Amendment and the RFRA. The RFRA was enacted in 1993 to protect “persons” from generally applicable laws that burden their free exercise of religion.

The two cases that will be heard by the Supreme Court pose a fundamental question whether the guarantee of the free exercise of religion applies to secular for-profit corporations. The for-profit corporations challenging the women’s preventive health care requirements are owned by religious families who believe they are running their businesses in line with their faith, and their religious views impart to their businesses. Both the owners and the corporations are contending that their rights are violated under the RFRA and the First Amendment.

The Supreme Court is reviewing the legal challenges brought by Hobby Lobby Stores Inc. and Conestoga Wood Specialties, Corp. The Green family, Protestants of Oklahoma, owns Hobby Lobby, a national chain of craft stores, and Mardel, a chain of book stores. The Greens contend they operate their businesses in line with their faith and that their religious beliefs prohibit them from providing health insurance coverage for Ella and Plan B (emergency contraceptives) and IUDs. Hobby Lobby currently operates 514 stores in over 41 states, and has 13,240 employees. Mardel, Inc. has 35 stores in 7 states and has 372 full-time employees. The Tenth Circuit ruled on June 27, 2013 that Hobby Lobby is likely to succeed on the merits of the RFRA claim. Conestoga Wood Specialties Corporation is a for- profit corporation owned by the Hahn family, practicing Mennonites of Pennsylvania. Conestoga manufactures cabinets and has 950 full time employees. The Hahn family opposes providing insurance coverage for Plan B and Ella. In this case, on July 26, 2013, the Third Circuit ruled against Conestoga Wood Specialties and the Hahn family. 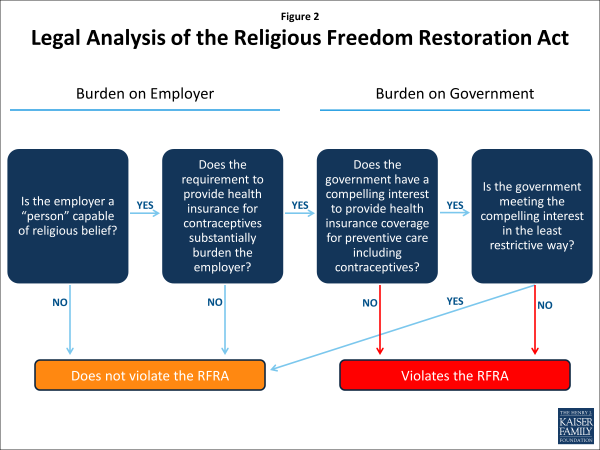 Five federal circuit courts have issued rulings on the RFRA and constitutional challenges brought by the owners and the corporations: the Third, Sixth, Seventh, Tenth, and D.C. Circuit.1 (See Appendices A and B) Like the Third Circuit, the Sixth Circuit also ruled that the corporation has no religious rights, and the owners could not challenge the law on their own. However, in line with the Tenth Circuit, the DC Circuit ruled that the owners, but not the corporation, were likely to succeed on the merits. The Seventh Circuit ruled that both the corporation and the owners were likely to succeed on the merits of the RFRA challenge. After the Supreme Court rules on Hobby Lobby and Conestoga Woods Specialties, the lower courts will apply this decision to the other pending cases.

The Religious Freedom Restoration Act of 1993, which the corporations claim is violated by the contraceptive coverage requirement, was intended to protect people from laws that burden their exercise of religion. In other words, the Act requires the government to show the law in question, in this case the requirement that plans include coverage of all prescribed FDA approved contraceptives, furthers a “compelling interest” in the “least restrictive means” when it “substantially burdens a person’s exercise of religion.”

In these cases, the government is asserting that its compelling interest is in 1) safeguarding the public health, 2) promoting a woman’s compelling interest in autonomy and 3) promoting gender equality.2 Lastly the government must show it is meeting the compelling interest in the least restrictive means. The plaintiffs contend, on the other hand, that the government cannot have a compelling interest when it does not apply this requirement equally to all employers, effectively exempting those with less than fifty employees that do not provide health insurance, grandfathered plans, and some religious organizations (houses of worship and religiously affiliated nonprofits that are eligible for an accommodation). They also argue there are less restrictive ways to accomplish the same goals including: “Provide a tax credit to employees who purchase emergency contraceptives with their own funds; Directly provide the drugs at issue or directly provide insurance coverage for them through the state and federal health exchanges; Empower willing actors – for instance, physicians, pharmaceutical companies or various interest groups to deliver the drugs and sponsor education about them; Use their own resources to inform the public that these drugs are available in a wide array of publicly-funded venues.”3

Under the First Amendment claims that are being made under these two cases, the Court must determine if a for-profit corporation can “exercise religion.” The plaintiff corporations, Hobby Lobby and Conestoga Wood Specialties, are offering two ways that corporations can exercise religion: 1) directly relying on the Supreme Court’s recent decision in Citizens United v. Fed. Election Comm’n4holding that “the Government may not suppress political speech on the basis of the speaker’s corporate identity,” and thus striking down a law restricting corporate political donations; and 2) under a “passed through” theory which assumes the corporation is an extension of the beliefs of the owners of the corporation.5

While the Supreme Court is hearing two cases that involve for-profit corporations, forty-one nonprofit organizations have also filed cases challenging that the “accommodation” made by HHS is not sufficient. The nonprofits argue that when the insurer separately contracts with an employer’s workers to cover contraceptives at no cost, it remains part of the employer’s plan and is financed by the employer. While the nonprofit religious corporations may be able to demonstrate that they can “exercise religion” under the RFRA, the nonprofit corporations must then demonstrate that the regulation, even with the “accommodation,” substantially burdens their exercise of religion. Just as in the cases brought by for-profit corporations, if the nonprofit corporation can show that it is substantially burdened, then the government will then have the burden to show that the contraceptive coverage requirement is a “compelling interest” that is met in the “least restrictive means.”

Many of the nonprofit plaintiffs filed their cases before July 2013 when the final regulation was issued providing the “accommodation,” but some of the nonprofits re-filed after the regulation was finalized. Therefore, these cases are not as far along in the court system as the cases brought by for-profit corporations and are not currently before the Supreme Court.6 It is likely that some of these nonprofit cases will petition the Supreme Court for review after they make it through the U.S. Courts of Appeals, as was done by the for-profit corporations.