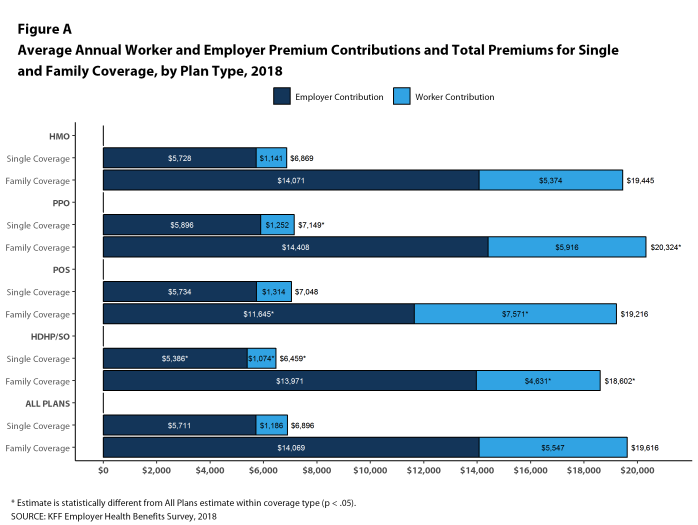 Figure A: Average Annual Worker and Employer Premium Contributions and Total Premiums for Single and Family Coverage, by Plan Type, 2018 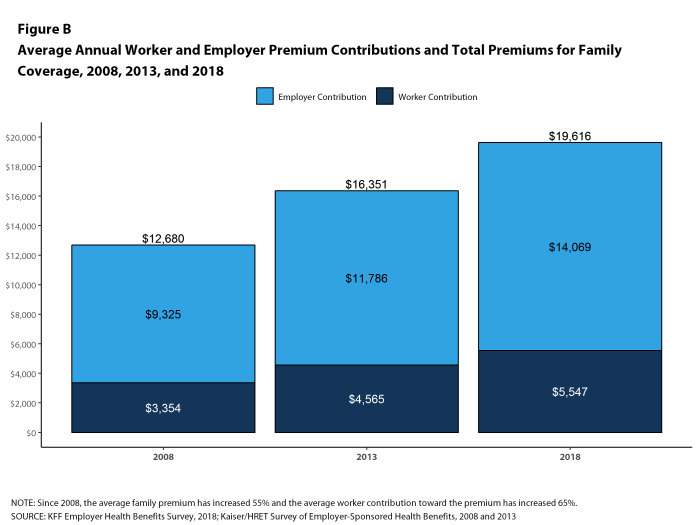 Figure B: Average Annual Worker and Employer Premium Contributions and Total Premiums for Family Coverage, 2008, 2013, and 2018 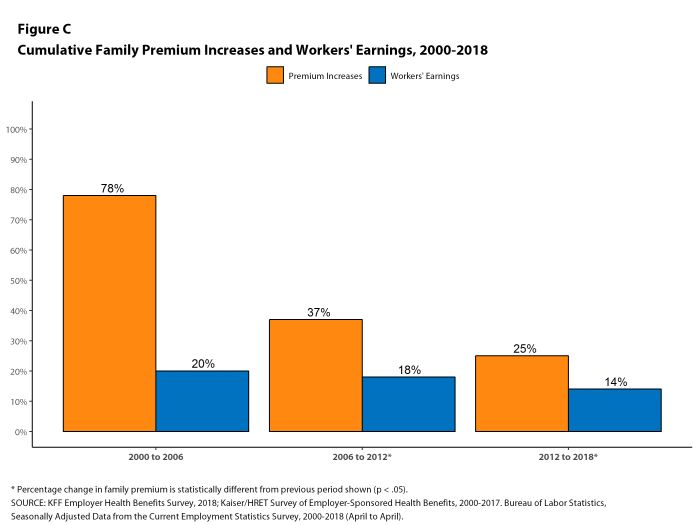 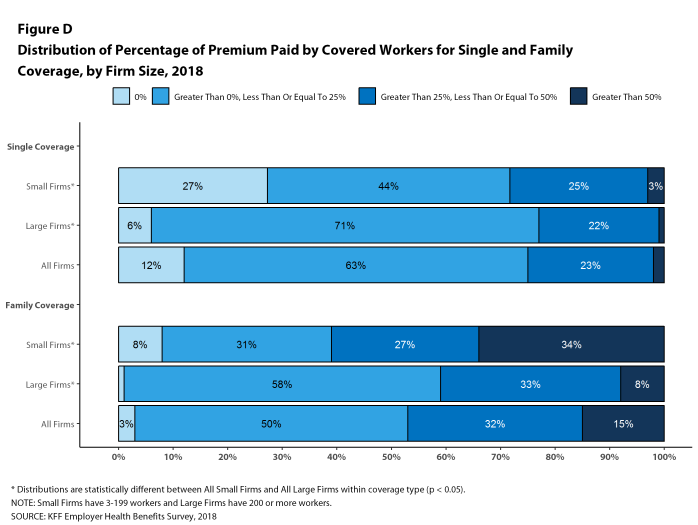 Figure D: Distribution of Percentage of Premium Paid by Covered Workers for Single and Family Coverage, by Firm Size, 2018 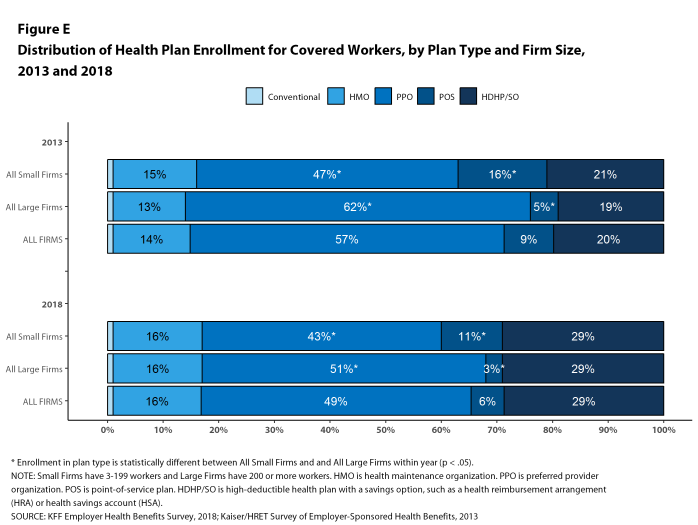 In recent years, insurers have begun offering health plans that provide a nominally self-funded option for small or mid-sized employers that incorporates stoploss insurance with relatively low attachment points. These plans are sometimes referred to as level-funded plans because insurers calculate an expected monthly expense for the employer that includes a share of the estimated annual expense for benefits, the premiums for the stoploss protection, and an administrative fee. Due to the complexity of the funding (and regulatory status) of these plans, and because employers often pay a monthly amount that resembles a premium, they may be confused as to whether or not their health plan is self-funded or insured. To test this, we asked employers with fewer than 200 workers that responded that they had an insured health plan whether they had a level-funded plan. Among small firms that responded that they had an insured plan, 6% reported that they had a level-funded plan.

Most covered workers must pay a share of the cost when they use health care services. Eighty-five percent of covered workers have a general annual deductible for single coverage that must be met before most services are paid for by the plan, an increase from last year [Figure F]. Even workers without a general annual deductible often face other types of cost sharing when they use services, such as copayments or coinsurance for office visits and hospitalizations.

Whether they face a general annual deductible or not, a large share of covered workers also pay a portion of the cost when they visit an in-network physician. For primary care, 66% of covered workers have a copayment (a fixed dollar amount) when they visit a doctor and 24% have coinsurance (a percentage of the covered amount). For specialty care, 64% face a copayment and 27% face coinsurance. The average copayments are $25 for primary care and $40 for specialty care. The average coinsurance is 18% for both primary and specialty care. These amounts are similar to those in 2017. 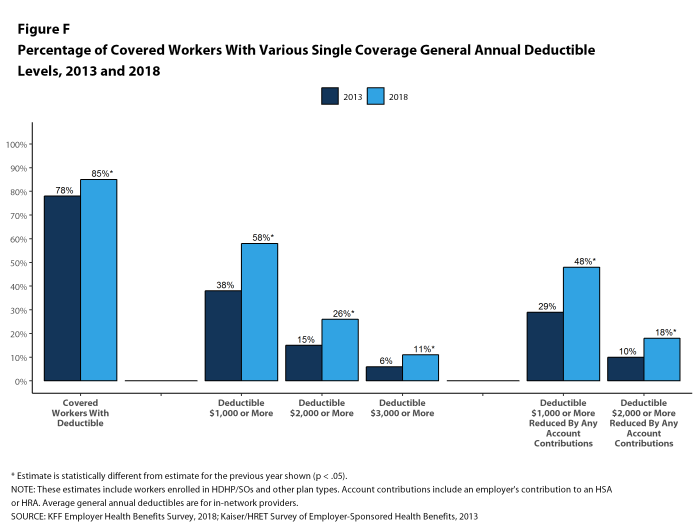 While the vast majority of firms are small, most workers work for large firms that offer coverage. In 2018, 90% of workers are employed by a firm that offers health benefits to at least some of its workers.

Even in firms that offer health benefits, some workers are not eligible to enroll (e.g., waiting periods or part-time or temporary work status) and others who are eligible choose not to enroll (e.g., they feel the coverage is too expensive or they are covered through another source). In firms that offer coverage, 79% of workers are eligible for the health benefits offered, and of those eligible, 76% take up the firm’s offer, resulting in 60% of workers in offering firms enrolling in coverage through their employer. All of these percentages are similar to 2017.

Looking across workers both in firms that offer and those that do not offer health benefits, 53% of workers are covered by health plans offered by their employer, similar to the percentage last year. 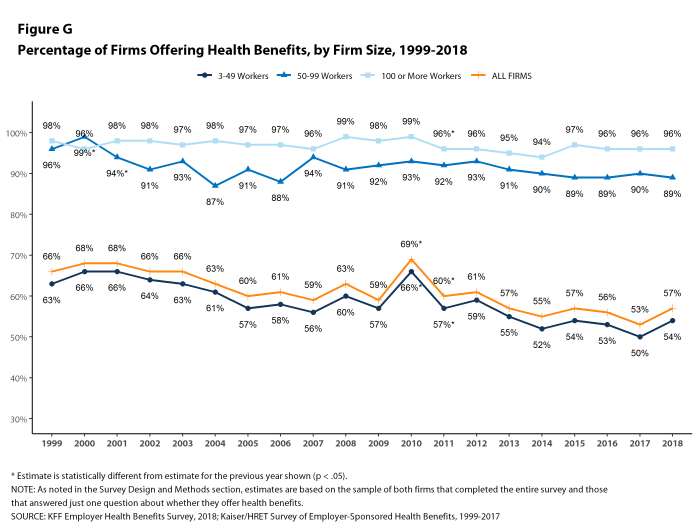 Health and Wellness Promotion Programs. A majority of firms offering health benefits offer programs to help workers identify health risks and unhealthy behaviors, and improve their lifestyles. Fifty-three percent of small firms and 82% of large firms offer a program in at least one of these areas: smoking cessation; weight management; and behavioral or lifestyle coaching. Among large firms offering at least one of these programs, 35% offer workers an incentive to participate in or complete the program. 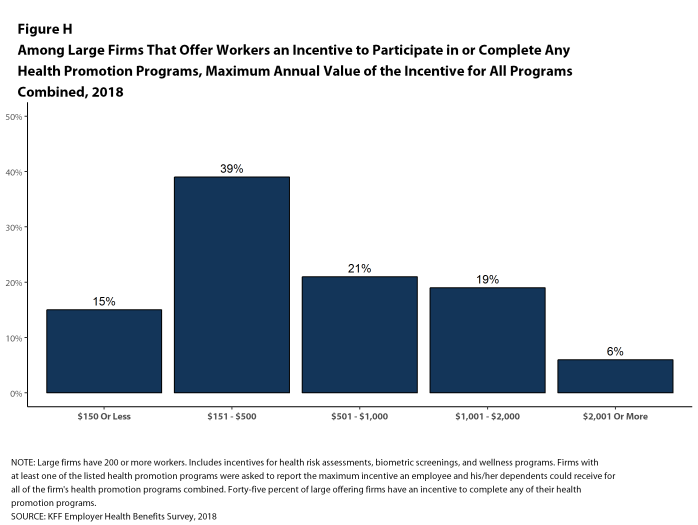 Figure H: Among Large Firms That Offer Workers an Incentive to Participate In or Complete Any Health Promotion Programs, Maximum Annual Value of the Incentive for All Programs Combined, 2018

On-Site Health Clinics Only 10% of large firms offering health benefits have an on-site health clinic for their employees at one or more of their major locations. A large share of these firms report that employees can receive treatment for non-work-related illnesses at their on-site clinics.

High Performance or Tiered Networks. Seventeen percent of large firms that offer health benefits include a high-performance or tiered provider network in their health plan with the largest enrollment, a similar percentage to last year [Figure I]. These arrangements identify providers that are more efficient and generally provide financial or other incentives for enrollees to use the selected providers. Firms with 1,000 or more workers are more likely than smaller firms to incorporate a high-performance or tiered network into their largest plan.

Narrow Networks. Five percent of large firms offering health benefits offer a plan they consider to be a narrow network plan, similar to the percentages for the past two years [Figure I]. Narrow network plans limit the number of providers who can participate in order to reduce costs, and are generally more restrictive than standard HMO networks. Firms with 5,000 or more workers offering health benefits are more likely than firms of other sizes to offer at least one plan with a narrow network.

Eliminated Hospitals or Health Systems. Only 3% of large firms report that they or their health plan eliminated a hospital or health system in the past year in order to reduce the costs of their plan, similar to the percentage reported last year [Figure I]. Firms with 5,000 or more workers offering health benefits are more likely to say that either they or their insurer eliminated a hospital or health system from a provider network to reduce costs than firms of other sizes. 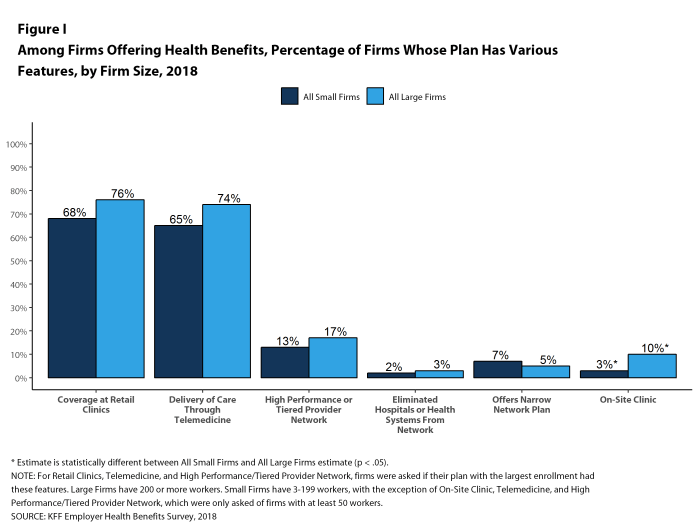 Figure I: Among Firms Offering Health Benefits, Percentage of Firms Whose Plan Has Various Features, by Firm Size, 2018

REPEAL OF TAX PENALTY FOR INDIVIDUALS WITHOUT HEALTH INSURANCE

The 2017 tax law eliminated the tax penalty for people who do not have health insurance (sometimes called the ‘individual mandate’) beginning in 2019. Nine percent of small firms and 24% of large firms report that they expect fewer employees and dependents to participate in their health plans as result of the change. Additionally, 5% of small firms and 10% of large firms said that they expect to change the benefit options for at least some employees as a result of the change.

This year continues a period of stability and relatively low cost growth for employer-provided coverage. While premium growth continues to exceed increases in earnings and inflation, the differences are small compared to recent periods which, along with low underlying health spending growth, may help explain the apparent reluctance of employers and plans to make many changes in the market [Figure C].

The one area where we have seen change is higher deductibles – the average deductible for single coverage among all workers increased 53% since 2013, driven in part by a 50% increase in HDHP/SO enrollment over that period. Higher deductibles have helped to keep premium increases relatively low, but it is unclear how long that trend will continue. Given the importance of health benefits to workers and prospective workers, employers may find it increasingly difficult to impose higher cost sharing in what is essentially a full employment economy. The growth in HDHP/SO enrollment has stalled over the past three years, which may be a sign of employer reluctance to rock the benefit boat for their workers. If underlying health care prices and service use begin to grow as part of stronger economic growth, employer and health plans may need to look for tools other than higher cost sharing to address the pressures that would lead to higher premium growth.

The Kaiser Family Foundation 2018 Employer Health Benefits Survey reports findings from a telephone survey of 2,160 randomly selected non-federal public and private employers with three or more workers. Researchers at NORC at the University of Chicago and the Kaiser Family Foundation designed and analyzed the survey. National Research, LLC conducted the fieldwork between January and July 2018. In 2018, the overall response rate is 32%, which includes firms that offer and do not offer health benefits. Among firms that offer health benefits, the survey’s response rate is also 32%. To improve estimates for small firms, the 2018 survey had a significantly larger sample than in previous years; the increased sample size led to both more firms completing the survey and a lower response rate than in years past. Unless otherwise noted, differences referred to in the text and figures use the 0.05 confidence level as the threshold for significance. Values below 3% are not shown on graphical figures to improve the readability of those graphs.