How Do Climate and Climate Change Affect Health? 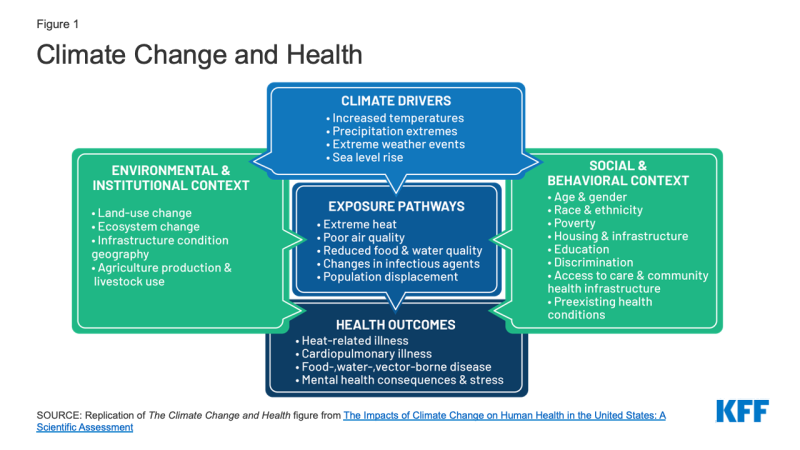 Who is at Increased Risk for Negative Health Impacts Due to Climate and Climate Change?

While climate change poses health threats for everyone, people of color, low-income people, and other marginalized or high-need groups face disproportionate risks due to underlying inequities and structural racism and discrimination. The same factors that contribute to health inequities influence climate vulnerability— the degree to which people or communities are at risk of experiencing the negative impacts of climate change.

People of color face increased climate-related health risks compared to their White counterparts. As a result of historic and contemporary structural racism and discrimination, people of color are more likely to live in poverty; be exposed to environmental hazards; and have less access to health, economic, and social resources; making them more at risk for negative health impacts due to climate compared to their White counterparts. Last year, the United States Environmental Protection Agency (EPA) found that racial and ethnic minorities were most likely to live in areas with the highest projected increases in morbidity and mortality due to climate related changes in temperatures and air pollution. They were more likely to lose labor hours and opportunities due to increases in high-temperature days. They were also the most likely to live in areas with projected land loss due to sea level change, as well as live in coastal areas with the highest projected increases in traffic delays due to high-tide flooding. For example:

Immigrants in the U.S. also face increased climate-related risks due to structural inequities. Immigrants are more likely than U.S. born people to work in environmentally hazardous professions and live in congregate housing with limited access to heating or cooling infrastructures, making them more susceptible to climate-related health risks. Noncitizen immigrants make up more than four in ten of agricultural workers in the United States. Data shows that between the years 1991 to 2006, agricultural workers engaged in crop production died at a 20 times higher rate from heat-related illnesses compared to all U.S. workers. Noncitizen immigrants also are more likely than citizens to be poor, which may contribute to increased challenges responding to and recovering from extreme weather events. For example, in the aftermath of Hurricane Harvey, immigrants were more likely than U.S.-born residents to report losses in employment and income. While immigrants were less likely to experience home damage, among those that did, they were less likely to have applied for government disaster assistance. Nearly half (48%) of immigrants with home damage said they were worried seeking help would draw attention to their or their families’ immigration statuses.

Low-income communities are likely to be disproportionately affected by climate change. People with low socioeconomic status are more likely to live in fragile housing, be exposed to environmental hazards, and have more limited ability to prepare for or recover from extreme climate events. Low-income households are more likely to have high energy burdens, a recent study found that 25% of low-income households could not afford to pay an energy bill in the past year, and nearly 13% were unable to pay an energy bill in the past month. This inability to pay their bills increases their likelihood of having their utilities disconnected, which would increase their exposure to extreme weather and resultant adverse health outcomes. In the event of extreme flooding and other weather, residents of federally assisted housing are put at an increased risk of exposure to toxic waste and runoff due to proximity to hazardous waste sites. A 2020 analysis found that 70% of the country’s most hazardous waste sites are located within one mile of U.S. Department of Housing and Urban Development (HUD)-assisted housing developments. Low-income communities are also more likely to be adversely impacted by natural disasters and other climate-related emergencies. In interviews with low-income survivors of Hurricane Katrina, KFF found that many survivors also reported suffering from emotional and mental trauma, barriers to accessing care resulting in serious and persistent gaps in care, unstable living conditions, and severe financial concerns. Similarly, a KFF survey of Puerto Ricans one year after Hurricane Maria found that those with lower incomes were more likely than residents with higher incomes to report housing-related challenges, including major damage or destruction of their home and unsafe housing conditions.

Older adults are more sensitive to climate change due to a variety of age-related reasons, including decreased thermoregulation, and a higher burden of chronic disease and disabilities. Given their age-related health changes, lower concentrations of air pollution and smaller temperature changes may result in adverse reactions. Analysis of fee-for-service Medicare data found that short-term exposure to air pollution was associated with an increase in annual hospital admissions and inpatient and post-acute care costs. Older people are also more likely to live alone and be socially isolated, putting them at increased risks of missing extreme weather warnings and potentially unable to respond to weather disasters. Further, in the last forty years, the number of older adults living in coastal communities has increased by 89%, which in combination with rising sea levels may put them at additional risk of being negatively affected by coastal flooding.

Why is a Focus on Climate Change and Health of Growing Importance?

In recent years, there has been an increase in the frequency and intensity of adverse climate-related events, with the potential to worsen health outcomes and exacerbate health inequities. The Intergovernmental Panel on Climate Change (IPCC) recently released its sixth report on climate change, noting that the risk to human health is increased with every fractional increase in global temperature. In June 2021, the western United States experienced record-breaking heat waves, increasing the risk of heat-related injuries, droughts, and wildfires. In addition to extreme heat, the past five years recorded some historical storm activity, with 2020 being the second time in history that the National Oceanic and Atmospheric Administration (NOAA) exceeded the 21-name Atlantic list of storms. Researchers predict that the Earth will continue to experience an increase in its mean temperature, weather variability, and the frequency and intensity of extreme weather events. A 2019 Government Accountability Office report found that the effects of climate change posed a threat to 60% of the hazardous waste sites known as Superfund sites in the country. In 2020, scientists reported that extreme coastal flooding would threaten more than 900 Superfund sites in the next 20 years. This could have detrimental impacts on nearby residents (primarily low-income and communities of color) by exposing them to toxic chemicals through flooding and runoff.

Changes in land use, increases in ambient temperature, and changes in weather patterns can impact the spread of infectious diseases. As temperature rise, scientists project changes in mosquito abundance and mosquito-borne disease spread, which could increase people’s exposure to dengue, zika, yellow fever, and other mosquito-borne diseases. In the past twenty years, the mosquitos that spread dengue fever in the United States increased by 8.2% in response to rapid temperature increases. Climate change-related temperature increases have also contributed to the expanded range of ticks, increasing the risk of contracting Lyme disease.

What are Current Federal Efforts to Address Climate Change and Health Equity?

On January 27, 2021, President Biden announced an Executive order on tackling the Climate Crisis at Home and Abroad, emphasizing the need for a government-wide approach to addressing the climate crisis, including centering climate change in all levels of policymaking. In response to Biden’s executive order, the U.S. Department of Health and Human Services (HHS) enacted its climate action plan, including the establishment of the Office of Climate Change and Health Equity (OCCHE) to address climate change and health equity. The climate action plan includes building more resilient and adaptive health programs, increasing the responsiveness to climate crises, and developing climate-resilient grant policies at HHS. In addition, OCCHE is tasked with creating an Interagency Working Group to Decrease Risk of Climate Change to Children, the Elderly, People with Disabilities, and the Vulnerable and a biennial Health Care System Readiness Advisory Council.

The executive order committed to delivering at least 40 percent of overall benefits from federal investments in climate and clean energy to disadvantaged communities. This includes addressing the impact Superfund sites have on communities, the launch of the Communities Local Energy Action Program (Communities LEAP), which helps communities that the fossil fuel industry has historically impacted to develop locally-driven energy plans to reduce local air pollution, increase energy resilience, lower both utility costs and energy burdens. The U.S. Department of Energy launched a $9 million effort to help 15 underserved and frontline communities better assess their energy storage as a means of achieving energy resilience and reducing energy insecurity.

In October 2021 Occupational Safety and Health Administration (OSHA) proposed a rule to protect workers from extreme heat exposure in indoor and outdoor settings and set up a National Emphasis Program (NEP) on heat inspections. The comment period for the proposed rule concluded on January 26, 2022. OSHA launched the NEP for Outdoor and Indoor Heat-Related Hazards on April 8, 2022. The NEP is an enforcement program that seeks to identify and eliminate or reduce worker exposures to occupational heat-related illnesses and injuries in workplaces where heat hazards are prevalent. It would include inspections prioritizing heat-related interventions and inspections of work activities on days when the heat index surpasses 80 degrees Fahrenheit. It is an expansion of the agency’s current heat-related illness prevention initiatives

The federal government has also taken several actions to protect disproportionately affected populations from exposure to toxic chemicals. The EPA revoked the usage of certain dangerous chemicals, including chlorpyrifos- a pesticide that negatively impacts farmworkers and children. There are also cross-agency efforts underway to reduce pollution burdens and exposures, including lead exposure and asthma disparities in children of color.

Last year, FEMA announced grants and initiatives dedicated to advancing climate change adaptation and promoting risk reduction and community resilience across the country. These include developing a FEMA National Risk Index to identify locations most at risk for 18 natural hazards, adopting climate resilience building standards, and dedicating funding to support communities at risk of being affected by climate-related extreme weather events and other natural disasters. For example: the Hazard Mitigation Assistance grant programs, Flood Mitigation Assistance grant program, Individuals and Households Program, and other programs. Hazard mitigation strategies play key roles in preventing or minimizing the impacts of natural disasters on communities by investing in and supporting climate resilient infrastructure. In collaboration with public health experts, these programs can also facilitate addressing health concerns caused and exacerbated by disasters, including reducing lapses in health care access, addressing physical and mental health challenges, spread of communicable disease, and others.