The majority of nonelderly people get their health coverage through an employer-based plan. This issue brief uses data from the National Health Interview Survey (NHIS) to examine trends in employer-sponsored health insurance (ESI) for different types of people and households.1 While ESI remains the leading source of coverage for nonelderly people (those under age 65), the percentage covered by an employer plan has declined over the last fifteen years. A similar pattern exists with firm offer rates; fewer workers were offered health insurance from their employer in 2014 than in 1999. The decrease in offer and coverage rates has not been universal; families with low and modest incomes have been most affected by the decline. While coverage rates have declined over time, the percentage of the nonelderly population covered by ESI is similar between 2013 and 2014.

Both the percentage of employers who offer insurance and the percentage of people covered will be important to watch as the changes brought about by the Affordable Care Act (ACA) continue to unfold. New coverage provisions and financial assistance provided in the ACA affect employers’ decision to offer coverage and employees’ decisions to take up any coverage they are offered at work. The employer shared responsibility provision, for example, requires employers with 50 or more full-time equivalent employees to offer coverage to full-time employees and their dependent children or face a financial penalty. This provision should tend to expand the number of workers offered coverage in these firms, and, because most individuals are required to have health insurance or pay a penalty (the individual responsibility provision), more workers may take up the coverage offered at work. At the same time, new coverage options and financial assistance available through health insurance marketplaces may encourage some small employers (who are exempt from the employer shared responsibility provisions) to stop offering health benefits if they feel that their employees would be better off getting coverage through the marketplaces.2 Larger employers may also reconsider who they offer coverage to; some may stop offering coverage to part-time workers so those workers are eligible to receive a subsidy on the marketplaces. The percentage of people who received coverage through an employer sponsored plan in 2014 remained similar to the coverage rates in 2010, the year of the ACA’s passage.

In 2014, 66% of nonelderly workers received an offer of coverage from their employer; less than the 71% offer rate in 1999 (Figure 1). ESI offer rates vary by workers’ full-time status. Employees who worked part time (less than 30 hours a week at all their jobs) were less likely to be offered coverage from their employer than were employees who worked full time (30 or more hours a week) (21% vs. 72%). 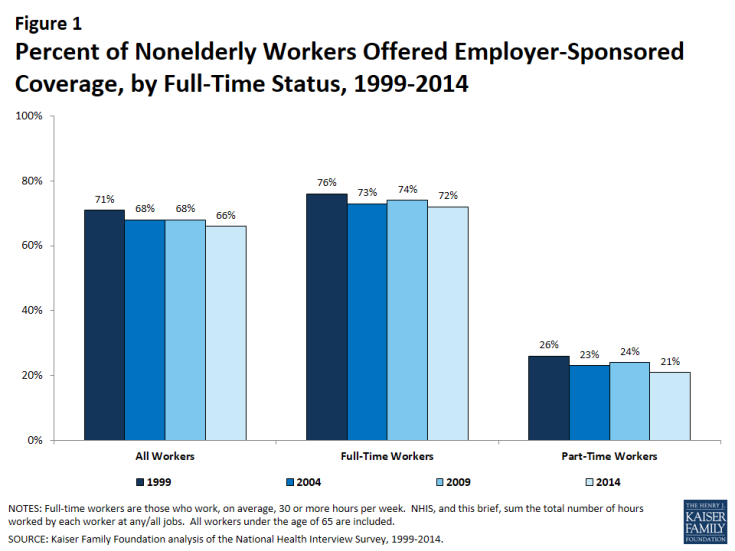 Since 2004, offer rates have remained stable for workers in households over 400% of the FPL, but have decreased for households below the poverty line (Figure 2). The percentage of workers offered employer sponsored coverage has decreased from 1999 to 2014 for all income groups. 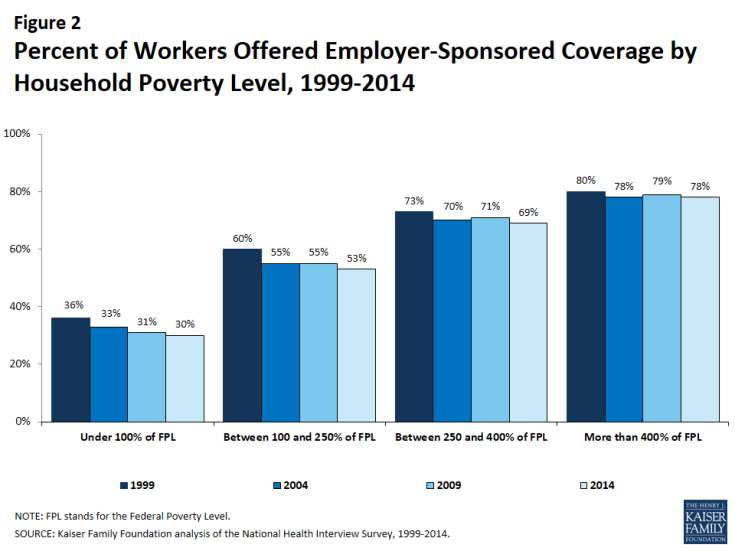 A similar pattern exists for both full-time workers and part-time workers; workers in higher income households are more likely to have an offer of employer coverage than workers in a household earning less than 100% of the FPL (Figures 3 and 4). 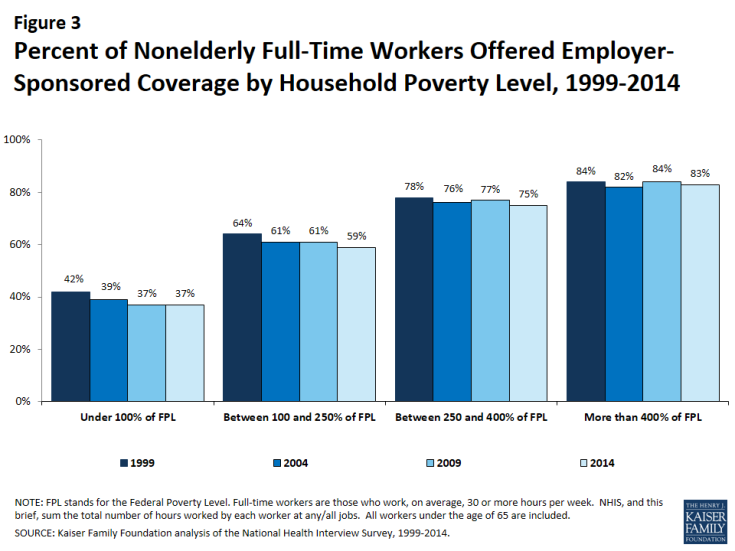 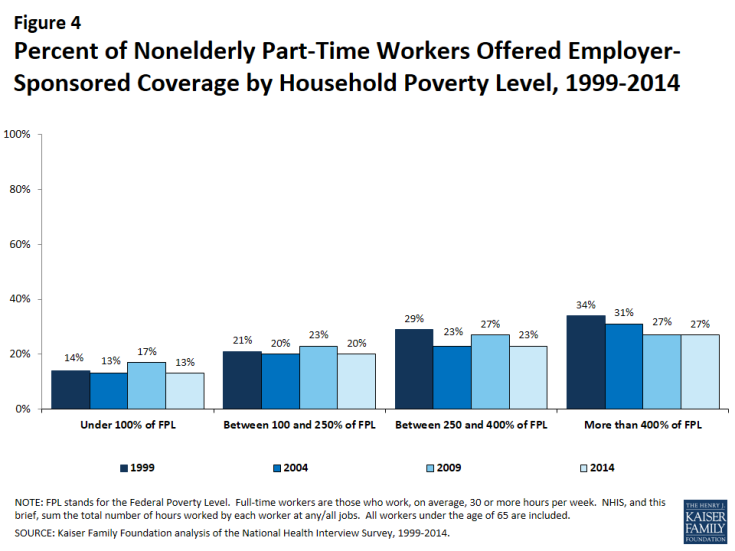 In addition to looking at the percentage of workers who are offered benefits, we can look at the percentage of the nonelderly population that is covered by ESI (Figure 5).3 Not all workers who are offered coverage accept their employer’s benefits, and many nonelderly people (with or without a job) receive coverage as a dependent on a family member’s plan. In 2014, 56% of nonelderly people were covered by ESI, similar to recent years, but a decline from the 67% covered by ESI in 1999. A variety of factors may contribute to this decline. First, changes in the economy and labor market; for example, a decrease in the percentage of people employed, known as the labor market participation rate, will decrease the percentage of individuals eligible for employer coverage.4,5 In 2014, people in families with a full-time worker were more likely to be covered by ESI (63%) than those in a family without a full-time worker (26%). In addition to changes in the labor market, employer coverage may also be less prevalent because fewer employers are offering coverage; in 2014, a smaller percentage of firms offered coverage than in 1999 (55% vs. 66%),6 and a smaller percentage of workers at firms offering benefits were covered by those benefits (62% vs. 66%).7 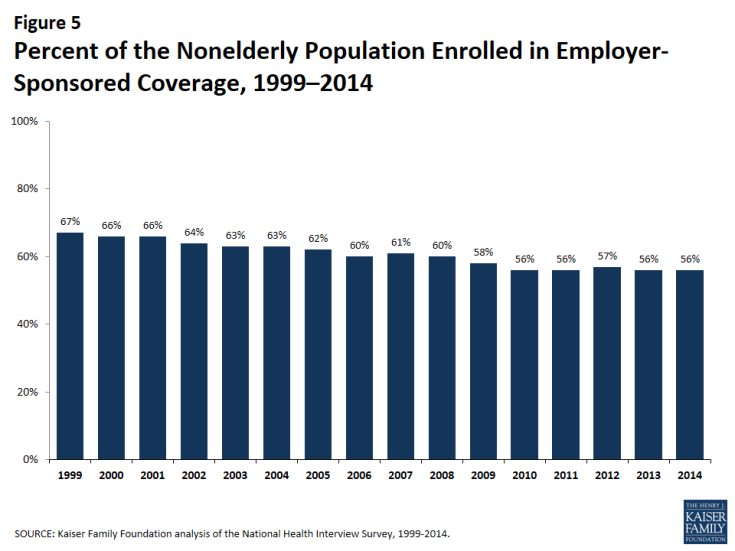 Figure 5: Percent of the Nonelderly Population Enrolled in Employer-Sponsored Coverage, 1999–2014

There is considerable interest in how employers and individuals alike will respond to changes brought on by the ACA. Beginning in 2014, millions of individuals enrolled in private health insurance subsidized with premium tax credits. As of yet, the NHIS data do not show that employer coverage is diminishing in its importance. The same percentage of the nonelderly households were covered by ESI in 2014 as in 2010 (56%).

There are important differences in who is covered by ESI based on a household’s income. Employer-sponsored coverage remains the main source of coverage for people in higher-income households while substantially fewer people in lower-income families are covered by an employer (Figure 6). Eighty-three percent of nonelderly people in families that earn more than four times the FPL are enrolled in employer coverage.8 Households at more than four times the FPL earn different incomes depending on a family’s composition; for example, in 2014, a single nonelderly adult would earn about $49,000 and a family of four including two children would earn about $96,000.9 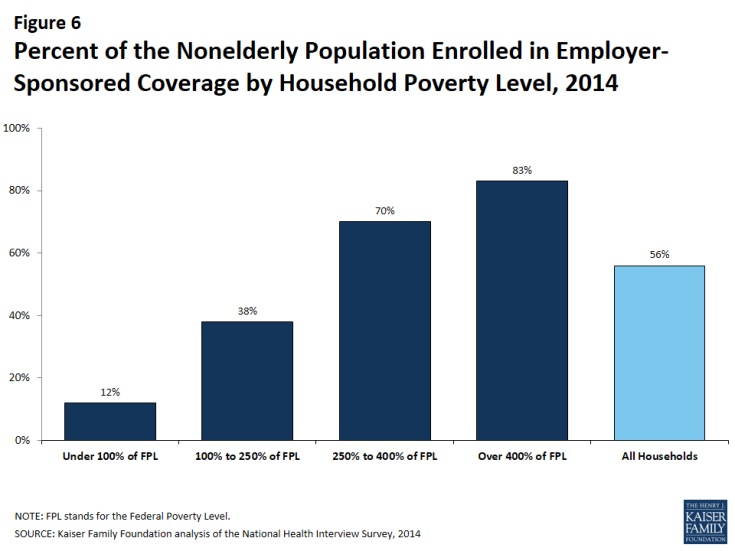 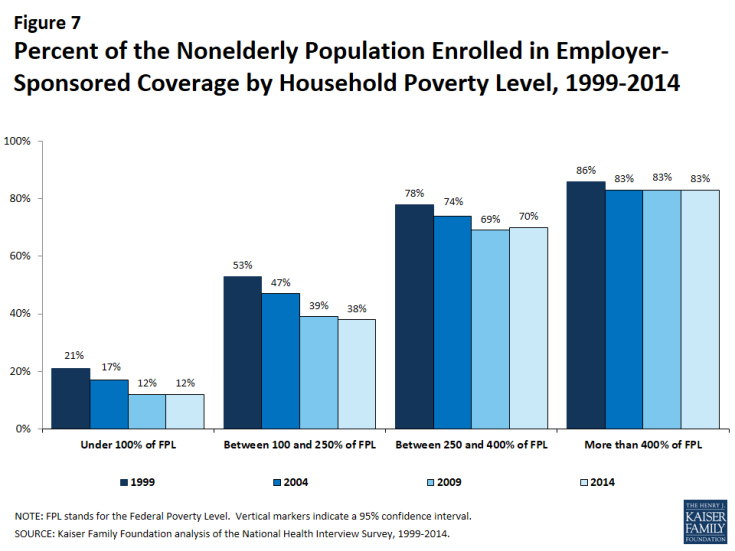 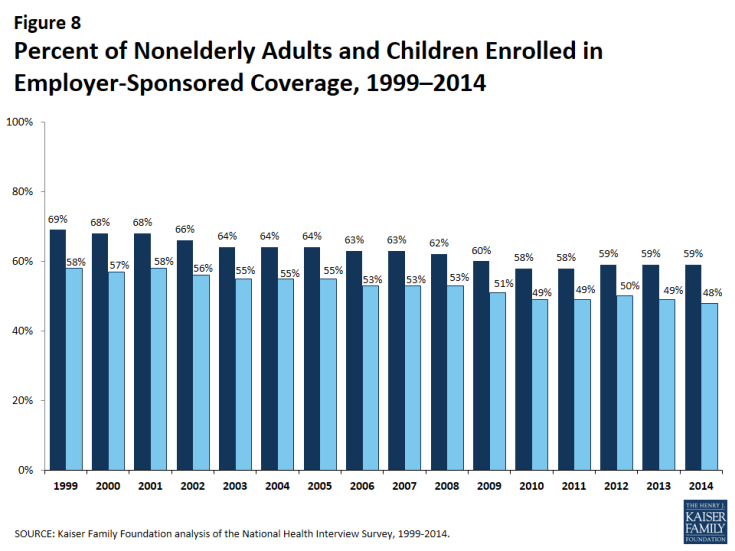 Employer-sponsored coverage became the central component of the American health insurance system for a variety of reasons, including the tax preference of employer’s spending on health benefits over wages, as well as the advantages of purchasing coverage as a group rather than as individuals. Many employers and employees continue to believe that offering health benefits is an important way for firms to recruit, retain and value talent. With employers facing rising costs, many commentators are speculating about the long-term stability of the employer-sponsored insurance system.

While employer-sponsored coverage remains the most common source of healthcare coverage, a smaller proportion of people are covered by employers than a decade ago. Estimates from the non-partisan Congressional Budget Office (CBO) suggest that employer coverage will remain the leading source of insurance coverage for nonelderly Americans even after the ACA is fully implemented.13 At the same time, changes in the American workforce and economy will continue to impact employer coverage. Health reform has expanded coverage to the uninsured while providing incentives for employers to continue to offer benefits (such as tax credits for small employers who offer coverage and penalties for large employers who do not). How employers respond to increasing costs and regulatory changes will, in part, determine how people receive coverage in the years to come.