Universal Paid Family and Medical Leave Under Consideration in Congress

The House of Representatives is considering a provision of the Build Back Better Act that would create a universal paid family and medical leave program. This post takes a look at this proposal, key policy questions, and what it could mean for women and families.

What is in the proposal?

Qualifying reasons for leave include:

What family members could workers take leave to care for?

The U.S. is the only industrialized nation without a minimum standard of paid family or medical leave, even though universal paid leave enjoys strong public support, including among Republicans. Nine states and DC have paid leave requirements and some employers voluntarily offer these benefits, resulting in a patchwork of policies with varying degrees of generosity. The federal Family and Medical Leave Act (FMLA) requires some employers to provide unpaid time off as well as job protection to eligible employees for family caregiving and medical leave, but just over half (56%) of the workforce is eligible.

Most people will need to take time off work to care for themselves or their families at some point, but only about one in four (23%) workers have access to paid family leave through their employer. That share is even lower for low-wage and part-time workers, and in certain occupations (Figure 1). Data on the share of workers with access to paid medical leave for a longer, serious illness are limited, although 40% of workers are estimated to have access to short-term disability insurance. 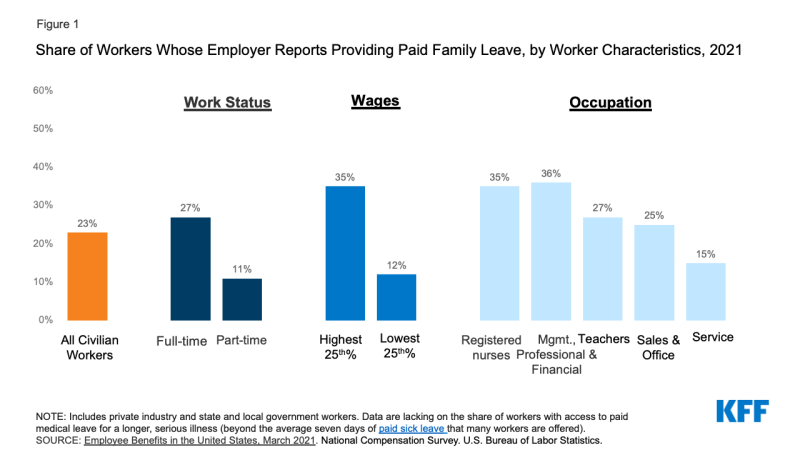 How would this proposal intersect with existing state-level and voluntary employer paid leave programs?

What is the process for Congressional approval?

Some Senators (Republicans and some conservative Democrats) have expressed concern about the overall cost of the budget resolution. While the current version of the entire legislative package is estimated to cost about $3.5 trillion over ten years, it is unclear how the paid leave program, specifically, would be financed and the Congressional Budget Office (CBO) has not scored it. If the price of the current budget resolution gets reduced during Congressional negotiations, the scope of the paid leave provision could be scaled back.

Senate Democrats have not released a recent paid leave proposal but could take up the House bill in its current form or look to elements of other proposals. For example, the paid family and medical leave proposed as part of President Biden’s American Families Plan would cover nearly all workers, would have a $4,000/month cap on wage replacement, and would be financed through general taxes, but it also has not been scored by the CBO. Unlike the House proposal, in Biden’s plan, full benefits would not be realized until year ten of the program. In 2019, the CBO estimated that the Democratic-led FAMILY Act, similar to Biden’s proposal, but partially paid for by a new payroll tax, would cost $547 billion over ten years.

What would universal paid leave mean for women and families?

Paid leave is especially important for women, who are typically the primary caregivers in families, and is associated with improved mental and physical health for new mothers and infants. Research has also found that access to paid family leave helps women remain in the workforce after giving birth.

Additionally, research suggests that under this new proposal, the average American worker taking 12 weeks of paid leave would receive nearly $9,000 of pay.

Enacting universal paid family and medical leave would mean increased federal spending, but would have tangible health and economic benefits for workers and families when they need to take an extended leave for caregiving and medical reasons.