This was published as a Wall Street Journal Think Tank column on July 1, 2015. 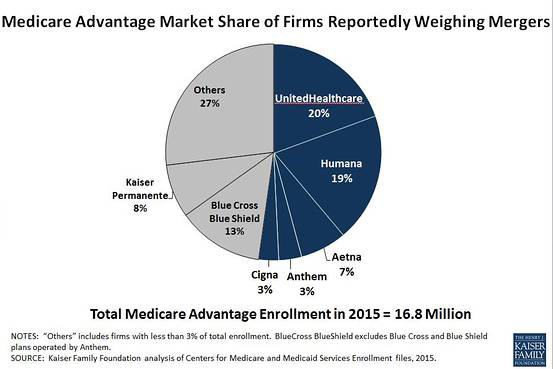 Discussion is growing about what rumored mergers between health insurance companies could mean for shareholders and the public. Initially, it was Humana exploring acquisitions by Cigna and Aetna. Then UnitedHealthcare approached Aetna. More recently, Aetna made a takeover proposal to Humana and Anthem announced a takeover bid for Cigna that seems to have been rejected.

When the Justice Department grapples with these mergers, it can be expected to take into account these companies’ growing Medicare business.

Insurers and their investors apparently see a potential upside to these mergers. For seniors, the outcome is less clear. On the one hand, with more market power plans could drive a harder bargain with providers and potentially exact lower prices. And the existence of fewer firms could make it easier for seniors to choose among Medicare Advantage plans in their area. Today, beneficiaries have, on average, a choice of 18 Medicare Advantage plans in their area. But less competition could lead to higher premiums (federal law limits the amount of premiums firms can use for administration, marketing, and profit), higher out-of-pocket costs for covered services, and narrower provider networks. One safety valve: If premiums go up too much, beneficiaries could return to traditional Medicare.

The market will sort out whether these acquisitions are good for insurers and their shareholders. The larger question for government to assess is whether a proposed merger is in the public interest.