This was published as a Wall Street Journal Think Tank column on June 23, 2015. 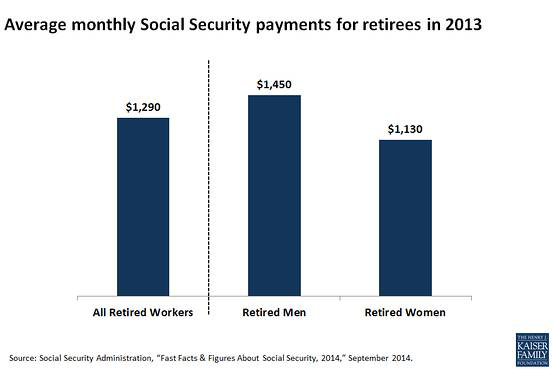 Recently I wrote about how seniors have been left out of the debate about income inequality despite their high poverty rates, which increase with age, leaving the oldest Americans the most economically vulnerable. Although many seniors are financially well off, and enjoying their golfing years, other data drive home just how economically fragile many seniors are:

Over time, the retirement picture is expected to improve at least somewhat for women. This is partly because female baby boomers have participated in the labor force at much higher rates than previous generations and so are likely to have higher retirement incomes, including Social Security payments and savings. By 2030, however, median income and savings are still projected to be lower for older women than men.

The gender gap in retirement income security happens because women are marrying less and working more but still being paid less than men. In 2013, the most recent year for which these data are available, women earned 82% of the median earnings of full-time male workers. Lower earnings lead, on average, to lower Social Security payments, retirement savings, and pensions. Lower savings are a particular concern for older women, who tend to live longer than men and need to stretch savings further to cover expenses as they age. Social Security, Medicare, and often Medicaid are fundamental to their retirement security.

Issues like Social Security and Medicare are seldom regarded as “women’s issues,” and they are not women’s issues alone. But they are central to the economic security of a growing population of economically disadvantaged older women.