Medicare Advantage and Part D plans vary significantly from each other in terms of costs and coverage. Plans often change from one year to the next, which could lead to unexpected and avoidable costs for beneficiaries who do not review their options annually. Plan changes can also lead to disruptions for beneficiaries in Medicare Advantage plans, if their doctors do not remain in their plan’s network from one year to the next, or if their drug plan no longer covers one of their medications, or makes a change in their pharmacy network, or increases costs for covered drugs. Further, beneficiaries’ health care needs, including the list of drugs they take, can change from one year to the next, making it even more important to compare coverage options annually, as the Centers for Medicare & Medicaid Services (CMS) recommends.

Previous KFF analysis shows that only a small share of Medicare beneficiaries voluntarily switch plans. This “stickiness” may indicate that beneficiaries are satisfied with their current coverage, but it may also indicate that many people on Medicare find it difficult to compare plans, are unaware of the open enrollment period, or are not confident in their ability to select a better plan. This analysis builds on previous KFF work by examining beneficiaries’ knowledge and behavior related to the Medicare open enrollment period, based on an analysis of the 2018 Medicare Current Beneficiary Survey (the most recent year available). All reported results are statistically significant.

In 2018, 43% of all Medicare beneficiaries reported they review or compare Medicare coverage options at least once every year, and 57% reported that they do not review or compare options annually. This latter group includes 24% who never compare plans, 22% of beneficiaries who rarely compare plans, 8% who compare once every few years, and 3% who compared only once when they first signed up for Medicare or their Prescription Drug Plan (Figure 1; Table 1). 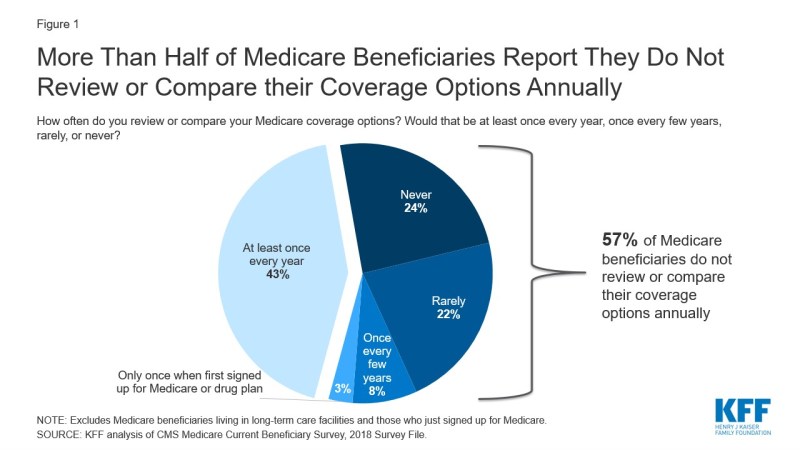 Figure 1: More Than Half of Medicare Beneficiaries Report They Do Not Review or Compare their Coverage Options Annually

The share of Medicare beneficiaries who do not annually review their coverage options is higher among people ages 85 and older, with lower incomes, lower education levels, and in fair or poor health (Figure 2). 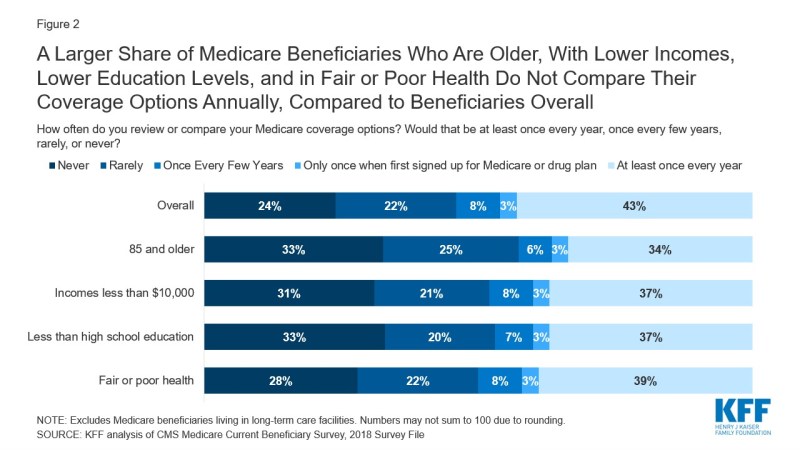 Figure 2: A Larger Share of Medicare Beneficiaries Who Are Older, With Lower Incomes, Lower Education Levels, and in Fair or Poor Health Do Not Compare Their Coverage Options Annually, Compared to Beneficiaries Overall 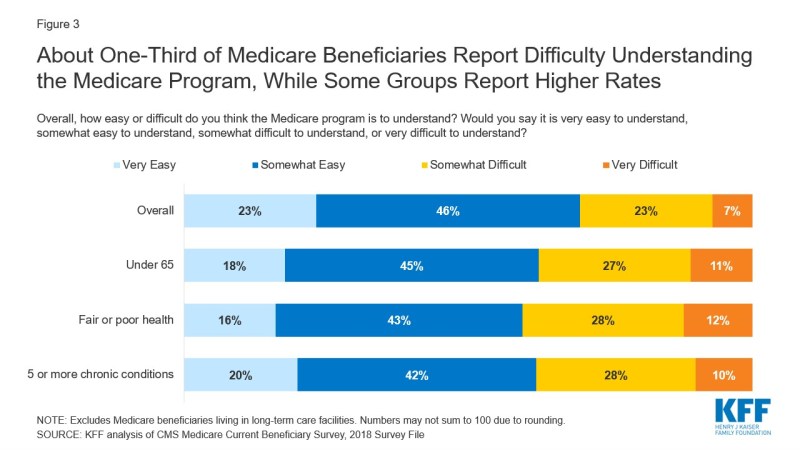 Half (55%) of Medicare beneficiaries reported it was very easy (16%) or somewhat easy (39%) to review and compare their Medicare options, while one in three overall (33%) said it was somewhat difficult (24%) or very difficult (9%), and 12% reported they do not make decisions about their coverage options (Table 3). A larger share of Medicare beneficiaries who are under the age of 65 with long-term disabilities and beneficiaries in fair or poor self-assessed health reported reviewing their Medicare coverage options was somewhat or very difficult.

Most Medicare Beneficiaries Do Not Use Medicare’s Official Information Sources 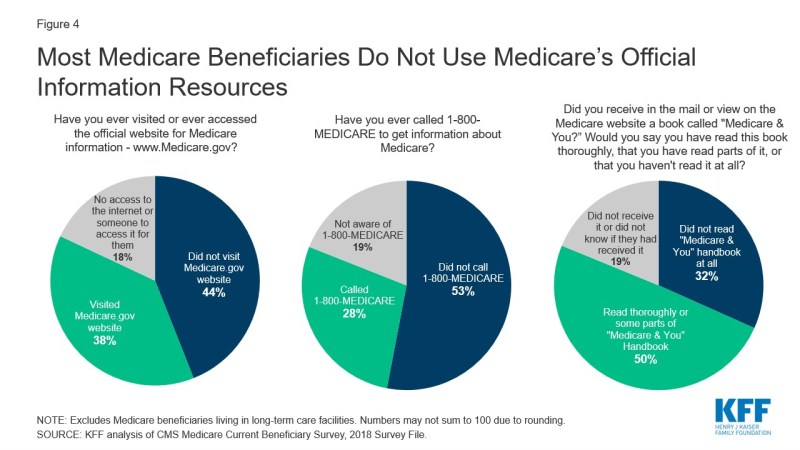 Figure 4: Most Medicare Beneficiaries Do Not Use Medicare’s Official Information Resources

The marketplace of Medicare private plans operates on the premise that people with Medicare will compare plans to select the best source of coverage, given their individual needs and circumstances. Past KFF analysis, based on focus groups, has revealed that many Medicare beneficiaries know about the open enrollment period, are generally aware that they should compare plans, but find the process of comparing plans challenging. This analysis, based on survey data, finds that most beneficiaries do not compare coverage options each year. In fact, nearly half never or rarely compare their Medicare health coverage options. We also find that the very people who may have the most at stake during the open enrollment period, such as those in relatively poor health, are least likely to compare their plan options, which can lead to unanticipated outcomes, such as higher out-of-pocket costs. Moreover, a relatively small share of beneficiaries uses Medicare’s official information resources which are designed to support informed decision-making.

With a growing number of Medicare private plan choices available each year, the fact that such a large share of seniors and people with disabilities are not comparing coverage options each year warrants attention, given the potential consequences of these decisions.