As Medicare’s annual open enrollment period gets underway, two new analyses from KFF suggest that a relatively small share of the nation’s 65 million Medicare beneficiaries will shop around among the many coverage options for 2023 or switch plans. That decision could have a significant impact on enrollees’ coverage and costs.

Results from one new KFF analysis show that only 3 in 10 beneficiaries (29%) compared their current plan with other Medicare plans offered during the open enrollment period for 2020.

The share of beneficiaries reviewing their coverage options was even lower among certain subgroups, including beneficiaries with lower incomes (15%); enrolled in both Medicare and Medicaid (16%); age 85 or older (18%); Hispanic (19%); or under age 65 with disabilities (22%).

A second KFF analysis finds that few beneficiaries choose to switch plans during open enrollment, regardless of whether they are enrolled in Medicare Advantage or traditional Medicare. For instance, among people in Medicare Advantage plans with prescription drug coverage, only 1 in 10 beneficiaries enrolled in such plans voluntarily switched plans for 2020. Among beneficiaries in in traditional Medicare with a stand-alone drug plan, only 2 in 10 opted for a different plan during open enrollment.

(This analysis excluded beneficiaries who receive low-income subsidies for Part D coverage because they have a more limited set of choices and because some are auto-assigned to new plans every year by the government.) 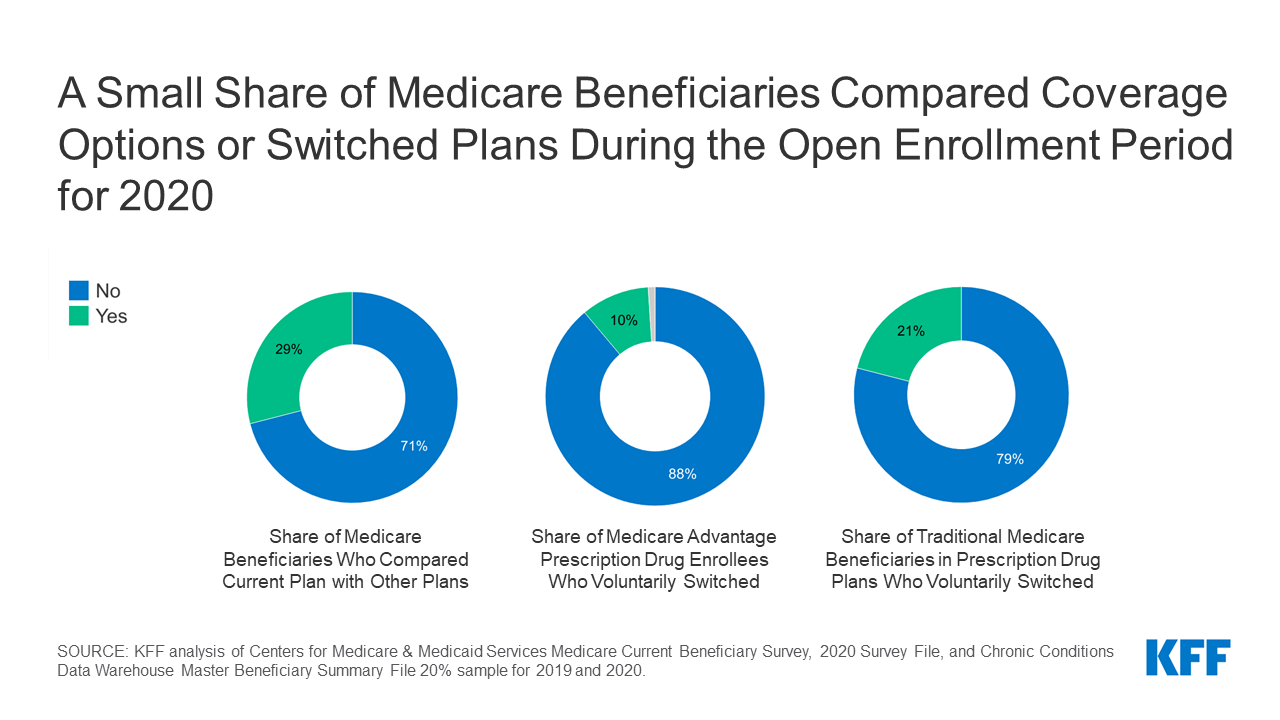 Coverage and costs vary widely among both Medicare Advantage plans and Part D prescription drug plans. From one year to the next, plans can change their premiums, cost-sharing requirements, and scope of covered drugs and supplemental benefits, as well as provider networks or prior authorization requirements. These changes could lead to unexpected and avoidable costs, and disruptions in care for beneficiaries who stay put and do not at least review their options annually, as the Centers for Medicare & Medicaid Services (CMS) recommended.

The analysis also finds Medicare’s official information resources are not widely used, especially the 1-800-MEDICARE helpline. Just under half of beneficiaries (49%) reported that they had read all or part of the Medicare & You handbook, and 44 percent said that they (or someone on their behalf) had visited the Medicare.gov website. Only 29 percent said they had called the helpline.

The two new KFF analyses are based on Medicare beneficiary survey and claims data from the Centers for Medicare & Medicaid Services.

For these and other Medicare-related data and analyses, including our Medicare Open Enrollment FAQs and our updated Overview of the Medicare Part D Prescription Drug Benefit, visit kff.org. The Medicare open enrollment period runs from October 15 through December 7.