Dental benefits are not generally covered by Medicare, except under limited circumstances, and many people on Medicare do not have any dental coverage at all. Some Medicare beneficiaries have access to dental coverage through other sources, such as Medicare Advantage plans, but the scope of dental benefits, when covered, varies widely and is often quite limited, which can result in high out-of-pocket costs among those with serious dental needs or unmet need.

Policymakers are now discussing options to make dental care more affordable by broadening dental coverage for people on Medicare. President Biden’s FY 2022 budget request includes as part of the President’s healthcare agenda “improving access to dental, hearing, and vision coverage in Medicare.” Senate Democrats recently announced an agreement to include Medicare expansions, including dental, vision, and hearing, as part of the budget reconciliation package, though details of the agreement have not yet been released. In 2019, the House of Representatives passed the Elijah E. Cummings Lower Drug Costs Now Act (H.R.3) that would add a dental benefit to Medicare Part B, along with a vision and hearing benefit, in addition to provisions to reduce prescription drug costs. Earlier this year, Representative Doggett, joined by 76 members of the House of Representatives, introduced the Medicare Dental, Vision, and Hearing Benefit Act (H.R. 4311) which would cover these benefits under Medicare Part B.

Nearly 24 million people, or about half of all Medicare beneficiaries (47%), did not have any form of dental coverage in 2019 (Figure 1). 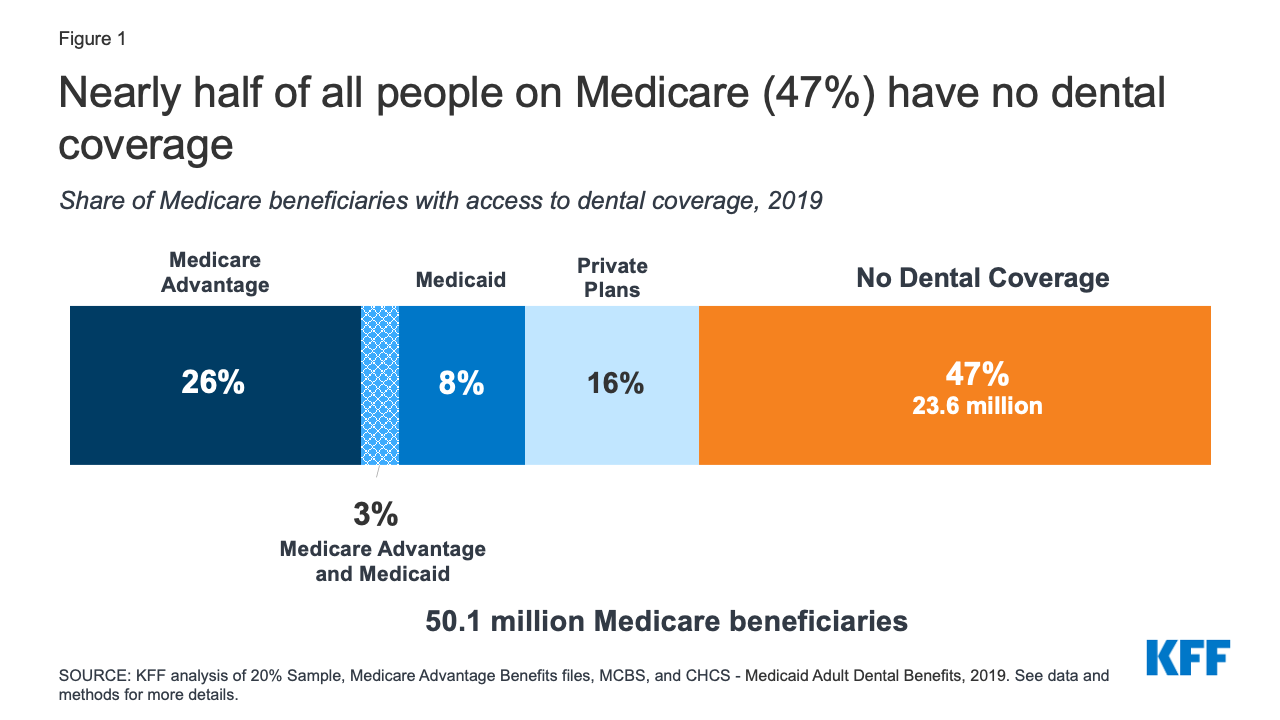 Figure 1: Nearly half of all people on Medicare (47%) have no dental coverage

A prior KFF analysis of the 2016 Medicare Current Beneficiary Survey (MCBS) and other data sources indicated that nearly two-thirds of people on Medicare (65%) had no dental coverage that year. However, due to a data collection and processing issue subsequently identified by CMS, the estimates for private dental coverage derived from the MCBS were lower than they should have been by an unknown magnitude. CMS resolved this issue in 2017. Due to this and other methodological changes in our analysis, as explained in the methodology, estimates of the number of people on Medicare with dental insurance cannot be trended using our 2016 estimate.

Lack of dental care can exacerbate chronic medical conditions, such as diabetes and cardiovascular disease, contribute to delayed diagnosis of serious medical conditions, and lead to preventable complications that sometimes result in costly emergency room visits.1 Limited or no dental coverage and cost concerns contribute to Medicare beneficiaries foregoing routine and other dental procedures.

Utilization. In 2018, half of Medicare beneficiaries did not have a dental visit (47%) – with even higher rates reported among those who are Black or Hispanic (68% and 61%, respectively) (Figure 2).

Health status was also correlated with dental care. Nearly two-thirds (63%) of all beneficiaries in fair or poor self-assessed health had a dental visit in the past year, as compared to 41% of beneficiaries in excellent, very good, or good health.

These relatively low rates of dental use are not attributable to a drop in utilization caused by the COVID-19 pandemic, as they are based on 2018 data, the most recent year available, which was prior to the pandemic.

Medicare Advantage plans may provide extra (“supplemental”) benefits that are not covered under traditional Medicare, such as dental, vision, hearing, and fitness benefits. The cost of these benefits may be covered using rebate dollars. Plans can also charge additional premiums for such benefits. In 2021, 94% of Medicare Advantage enrollees in individual plans, have access to some dental coverage. The majority (86%) of these Medicare Advantage enrollees have access to a plan with more extensive coverage, while 14% had access to preventive coverage only. Preventive dental coverage under Medicare Advantage plans generally includes oral exams, cleanings, dental x-rays, and sometimes fluoride treatments. More extensive benefits cover a range of services, including restorative services (e.g., fillings), endodontics (e.g., root canals), periodontics (e.g., scaling and root planing), prosthodontics (e.g., dentures, dental implants), and oral surgery.

Virtually all Medicare Advantage enrollees in plans that offer access to dental benefits (including if they have to pay a premium for those benefits), have access to preventive services, including oral exams (100%), cleanings (100%), and x-rays (99%), although fewer enrollees have access to fluoride treatment (59%).

Service Limits. Medicare Advantage plans typically limit the frequency of obtaining certain covered services during defined time frames. For example, nearly all enrollees (88%) are in plans that have frequency limits on the number of cleanings, with the most common limit being twice per year. For other services, such as x-rays, the frequency limits vary more across plans. For example, 36% of enrollees are in plans that limit the number of x-rays to a specified time frame, with the most common limit being once per year.

like other dental benefits, coverage for dentures varies across plans

As part of the prosthodontics service category, some beneficiaries may have access to coverage for dentures, a commonly needed service among older adults. As of 2018, nearly 14% of adults 65 and older are edentulous, meaning they have no natural teeth. We were unable to determine specifics about denture coverage based on the analysis of national data, so we looked at the ten illustrative plans in more detail. Five of the ten plans specified that they covered dentures (partial and full) and each of these plans limit dentures to 1 set every 5 years (Appendix Table 1). Among these five plans, cost sharing imposed on beneficiaries for dentures ranges from no copayment to a $500 copayment, and 50% to 70% coinsurance. All of these cost-sharing amounts are for in-network dental providers. Four out of the five plans have annual caps toward covered services, while one plan does not specify if it has an annual cap. The other five plans that offered dental coverage did not specify if dentures were covered.

Most Medicare Advantage enrollees have access to more extensive benefits and the majority (78%) of these enrollees are in plans that impose a maximum annual dollar cap on the amount the plan will pay for dental care. Some plans just cap the amount they will pay for the relatively extensive dental benefits (with no cap on preventive services), but the majority of enrollees are in plans that cap cost sharing for both preventive and more extensive services.

The average annual limit on dental coverage among plans that offer more extensive benefits is about $1,300 in 2021, and more than half (59%) of enrollees in these plans have dental benefits that are capped at $1,000 or less (Figure 4).

Medicare Advantage plans’ cost sharing for dental benefits varies across plans and by service category – some plans do not charge any cost sharing (primarily for preventive services), while others charge coinsurance and/or a flat copayment.

Among the ten illustrative Medicare Advantage plans with dental coverage, only one charges any cost sharing for preventive services ($10 copayment per service), though almost all plans (7) include an annual limit. Among the nine plans that offer more extensive dental services, five of the plans charge coinsurance, each of which is subject to an annual plan limit, with coinsurance ranging from 20% to 70% depending on the service, with 50% as the most common coinsurance amount across service categories. One of the plans requires copayments for more extensive dental benefits that vary depending on the service category (no annual maximum specified). Two plans that cover more extensive services do not require coinsurance or copayments; one of these plans has an annual limit ($2,300), while the other does not specify an annual limit.

Overall, 10% of Medicare Advantage enrollees in individual plans are required to pay a monthly premium to access any dental benefits, either preventive benefits only or more extensive benefits. For these enrollees, premiums average $270 per year, ranging from about $108 per year to $692 per year.

Some Medicare Advantage enrollees are in a plan where they are offered an option to pay a premium for additional dental benefits beyond those included in their plan, and some of these plans include vision and hearing benefits as part of that coverage. Dental premiums are in addition to premiums for other Medicare Advantage benefits, as well as the Medicare Part B premium ($148.50 in 2021).

As context for assessing the scope of dental benefits offered to Medicare Advantage enrollees, we reviewed dental coverage available to those who purchase dental coverage through the ACA Marketplaces. Adults purchasing plans through the ACA Marketplace may have dental coverage as part of their medical plan, or may choose to purchase separate stand-alone dental coverage. Among stand-alone dental plans available to adults on HealthCare.gov in 2021 (the federal marketplace), 100% cover routine preventive dental services (e.g. exams, cleanings, x-rays), 97% cover basic dental care (e.g. fillings, extractions, gum disease treatment, and root canals), and 81% cover major dental care (e.g. crowns, bridges, and dentures). Unlike the analysis of Medicare Advantage plans, the data on the ACA Marketplace is not enrollment-weighted.

Similarly, for adult major dental care, the most common cost sharing amount is 50% coinsurance after meeting the deductible (58% of plans that cover this benefit). These most common coinsurance amounts for basic and routine dental coverage are the same as those in Medicare Advantage plans for more extensive services (50% coinsurance), though most Medicare Advantage plans do not first charge a deductible. All of these coinsurance rates for the ACA Marketplace dental plans are for in-network providers.

Most plans on the ACA Marketplace have an annual limit the plan will pay toward covered services, typically ranging from $1,000 to $2,000. For stand-alone dental coverage, premiums vary slightly depending on the age of the enrollee. For an adult age 40, the average premium in 2021 is $290 per year, and ranges from $97 per year to $780 per year.

How Current Proposals Would Add a Dental Benefit to Medicare

In the 116th Congress, the House of Representatives passed the Elijah E. Cummings Lower Drug Costs Now Act (H.R.3), which among many provisions, provided for dental coverage under Part B of the Medicare program, starting in 2025 if enacted into law. Medicare would cover 80% of the cost of preventive services and basic treatments, and would phase up coverage for more major treatments, covering 10% of the cost in 2025, increasing 10 percentage points per year to 50% in 2029 and thereafter. The Congressional Budget Office estimated this benefit would cost almost $238 billion over 10 years (2020-209). The recently reintroduced version of H.R. 3 does not include coverage for a dental benefit.

Representative Doggett introduced the Medicare Dental, Vision, and Hearing Benefit Act (H.R. 4311) in July 2021 that would provide dental coverage under Medicare Part B. In contrast to H.R.3, the proposal, according to a press release, would require no coinsurance for preventive services, and impose a 20% coinsurance for more extensive benefits, which is similar to how the Part B benefit is structured for physician and other outpatient services, and is lower than the 50% coinsurance typically charged by Medicare Advantage plans.

Since its enactment in 1965, Medicare has not covered routine dental care and half of Medicare beneficiaries (47%) do not have any dental coverage, as of 2019. Without dental coverage, many people on Medicare forego needed and routine dental care – an issue that disproportionately impacts communities of color – with significantly fewer visits to the dentist in the past year among Black and Hispanic beneficiaries (68% and 61%, respectively) compared to White beneficiaries (42%). Untreated oral health can exacerbate certain chronic diseases, delay diagnosis of serious health conditions, and result in costly emergency visits. Further, among beneficiaries who have the ability to pay for dental treatment, many experience high out-of-pocket costs, with 20% of people spending more than $1,000 out-of-pocket on dental care.

In conducting this analysis, we found that plans do not use standard language when defining their benefits and include varying levels of detail, making it challenging for consumers or researchers to compare the scope of covered benefits across plans.

Given the continued interest in adding a dental benefit to Medicare, policymakers will need to weigh a variety factors in designing this benefit, including the scope of covered benefits, cost sharing for specific services, and how different levels of dental coverage may affect Medicare costs and premiums.