With the U.S. still in the throes of the COVID-19 pandemic, the Centers for Disease Control and Prevention (CDC) is recommending vaccination against the flu by the end of October 2020. While the flu vaccine does not protect against infection with SARS-CoV-2, the virus that causes COVID-19, getting a flu vaccination can both prevent and reduce the severity of flu illnesses in individuals and reduce strain on the health care system, which has been taxed by the number of COVID-19 cases in the U.S.

The fact that flu vaccination among high-risk groups, including people 65 and older, is not universal underscores the importance of understanding which groups of older adults are less likely than others to report getting a flu vaccine and why. Moreover, understanding more about flu vaccination coverage could help to inform efforts to develop effective messaging and outreach efforts to maximize coronavirus vaccination rates, particularly among high-risk populations. These efforts could be particularly challenging, given that a majority of the public is worried about the safety and effectiveness of a potential coronavirus vaccine(s) in light of the urgent push to develop and distribute them. This analysis explores variation in the rate of flu vaccination among adults ages 65 and older covered by Medicare, and reasons cited for not getting vaccinated, based on data from the 2018 Medicare Current Beneficiary Survey. Unless otherwise noted, differences between groups described below are statistically significant. 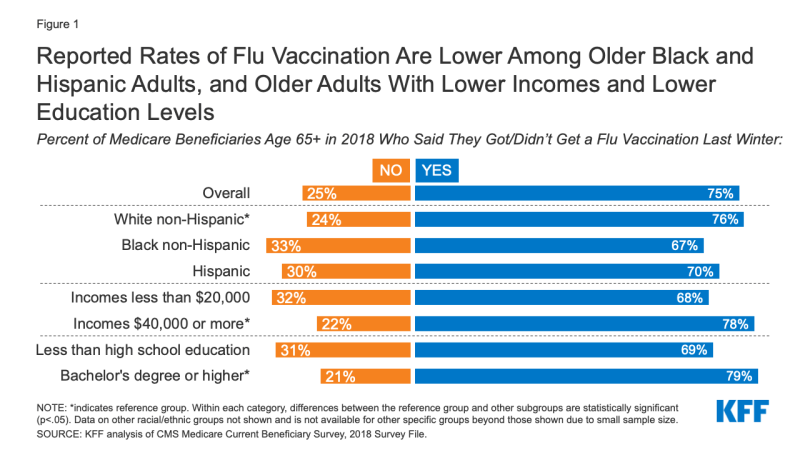 Reported Rates of Flu Vaccination Are the Same for Older Women and Men Overall, But Vary When Looking at Both Gender and Race/Ethnicity

Among the one-fourth of adults ages 65 and older who reported not getting a flu vaccination the previous winter, overall, the most commonly cited reasons for not doing so were concerns about side effects (18%), thinking the vaccine would not prevent the flu (15%), and thinking they were not at risk of catching the flu (12%) (Figure 2). Roughly one in 10 older beneficiaries who did not get a flu vaccination said they forgot or missed it. 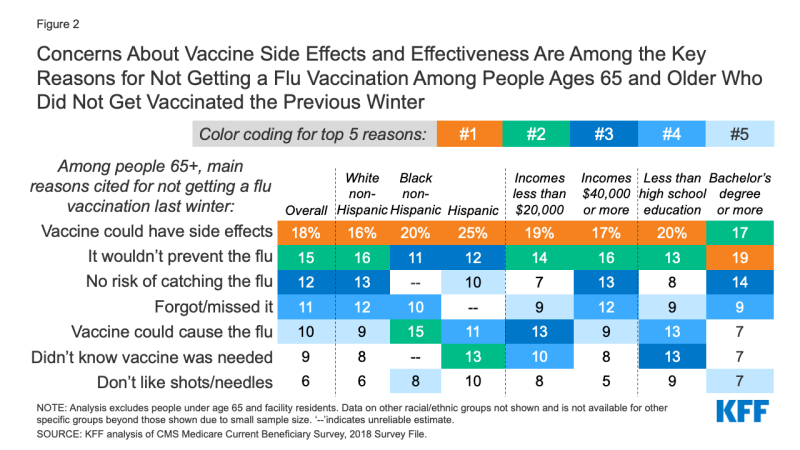 Figure 2: Concerns About Vaccine Side Effects and Effectiveness Are Among the Key Reasons for Not Getting a Flu Vaccination Among People Ages 65 and Older Who Did Not Get Vaccinated the Previous Winter

Among older Black adults, the second most commonly cited reason was thinking that the flu vaccine could cause the flu (15%), while for older Hispanic adults, not knowing the flu vaccine was needed was the second most frequently cited reason (13%). Misperceptions that the vaccine either would not prevent the flu or could cause the flu were cited by about 1 in 8 older adults with incomes less than $20,000 and those with less than a high school education.

This analysis shows that flu vaccination rates are lower among some groups of older adults, including people of color, and those with lower education levels and low incomes. The lower reported rate of flu vaccination by older Black beneficiaries is consistent with results from other studies, and may have roots in persistent racial and ethnic disparities in access to and use of preventive health care services, and a greater reluctance among Black adults than other groups of adults to trust medical scientists, based on a history of racial discrimination and mistreatment in clinical research activities and health care delivery.

Flu vaccination is higher among older beneficiaries who live in long-term care facilities than residents of the community, which may be a function of federal requirements for nursing homes to have systems in place for control of infectious and communicable diseases, as well as the fact that flu vaccination is among the measures of nursing home quality assessed by the Centers for Medicare & Medicaid Services. However, the fact that flu vaccination rates are lower among LTC facility residents with lower incomes than among those with higher incomes might be an indication of the quality gaps that exist between nursing homes with a larger share of lower-income residents and those with a smaller share.

Concerns about side effects, and misperceptions about the flu vaccine – namely, that it could cause the flu or would not prevent the flu – and lack of awareness are commonly cited reasons by older adults for not getting vaccinated. These findings have implications for the challenges that could lie ahead in achieving widespread vaccination rates among older adults when a vaccine against SARS-CoV-2 infection becomes available. If differences in COVID-19 vaccination rates mirror differences in flu vaccination rates, older Black and Hispanic adults could continue to bear a disproportionate burden of COVID-19 cases and deaths. To achieve high COVID-19 vaccination rates, well-targeted outreach efforts and messaging involving trusted sources will be important to help build trust and clearly communicate information about vaccine effectiveness and safety, just as they are key elements of educational efforts about the flu vaccine.