Facebook Twitter LinkedIn Email Print
Three key private health insurance markets — Medicare Advantage, the individual market and the fully-insured group market — appear to be financially healthy and attractive to insurers, according to a new KFF analysis. The private Medicare Advantage market generates significantly larger gross margins per person than the individual market or fully-insured market, the analysis finds. The future of these markets has become a focus for policymakers amid the debate over Medicare for All. Some proposals would essentially eliminate private health insurance, while others would retain a role for it but create a new public program to promote affordability and expanded coverage.  Some of these proposals would allow insurers to contract with the federal government’s public option to provide coverage, modeled on the Medicare Advantage program, in which plans are paid by the federal government. The analysis finds that private insurers achieved annual gross margins of $1,608 per person in Medicare Advantage, on average, between 2016 and 2018, about double the average gross margins in the individual market ($779) and group market ($855). The ACA-compliant individual market was marked by volatility in the early years of the exchanges, with insurers initially setting premiums too low before the market stabilized and insurers returned to pre-ACA profitability levels in 2018 following substantial premium increases. When aggregated across all plans in this analysis for 2016 to 2018, total gross margins averaged $23.9 billion per year for the Medicare Advantage market, $26.5 billion per year for the fully-insured group market and $10.6 billion per year for the much smaller individual market. 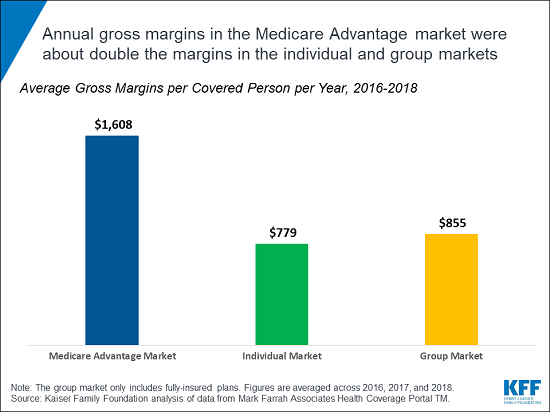 Medical loss ratios – medical expenses paid by insurers as a share of the total premiums collected – are similar across all three markets.  But gross margins are much higher for Medicare Advantage insurers because both medical expenses and premiums paid to Medicare Advantage plans are substantially higher, since Medicare enrollees tend to use more health care than people in the individual and group markets. Medicare Advantage plans cover 22 million beneficiaries. Plans purchased by individuals and families in the individual market, including the Affordable Care Act marketplaces in which subsidies are available to some, cover roughly 15 million people. The fully insured group market for employers and their employees, which gets tax-preferred treatment, serves over 30 million people (though most workers are covered through self-insured employer plans). For more analysis of Medicare, private insurance and Medicare for All proposals, visit kff.org.