To date, 45 states (including DC) have received Money Follows the Person (MFP) demonstration grants to transition Medicaid beneficiaries from institutions to the community.  Authorized by Congress in 2005 and extended through 2016 by the Affordable Care Act (ACA), MFP provides enhanced federal funding for 12 months for each participating Medicaid beneficiary.  Of the 45 states, 42 are currently operational, two states are not yet operational and one state’s demonstration is inactive.  In August 2013, the Kaiser Family Foundation’s Commission on Medicaid and the Uninsured surveyed all MFP states about enrollment trends, services, and per capita spending in their demonstrations.  States also were asked to describe the interactions between MFP and the ACA’s new and expanded long-term services and supports (LTSS) options and any state managed LTSS (MLTSS) programs. New companion papers profile MFP demonstrations in two states – Maryland and Tennessee – as well as the experiences of four MFP participants.1

As of August 2013, over 35,400 Medicaid beneficiaries had enrolled in MFP and another 5,780 transitions were in progress.  Forty percent of all MFP transitions occurred in three states (OH, TX, and WA), with the most cumulative transitions in Texas (7,307 or 21%).  The majority of MFP participants nationally are persons with physical disabilities (38%) and seniors (37.5%). One in five MFP participants (19%) has an intellectual/developmental disability (I/DD); 5 percent have a mental illness.  Over 10,300 Medicaid beneficiaries moved to the community through MFP between 2012 and 2013 (Figure 1).  On average, MFP participants were 58 years old, took 3.5 months to transition and most often moved to an apartment.  States also reported an 11 percent reinstitutionalization rate across all target populations. 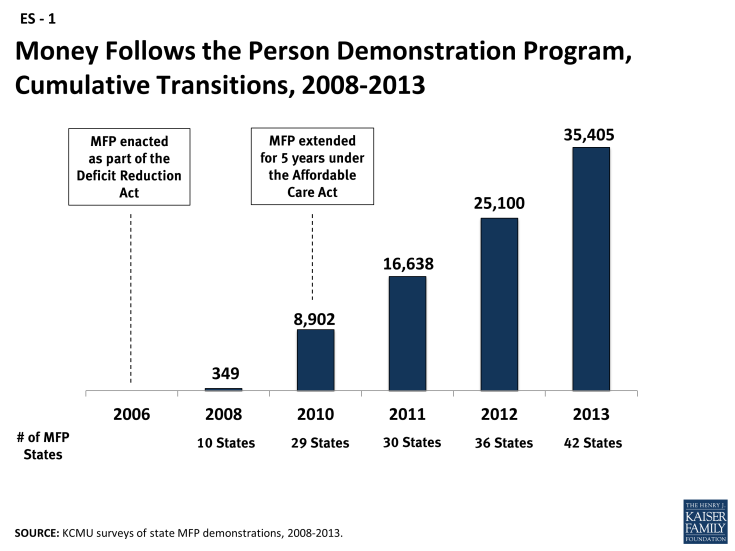 Lack of safe, affordable, and accessible housing and difficulty coordinating multiple LTSS initiatives alongside MFP were cited as the biggest challenges facing MFP grantees in the year ahead.  States have repeatedly cited the lack of housing options as the biggest barrier to MFP transitions since the demonstration began in 2008, with 20 states identifying this issue in 2013.  States reported the need for additional community housing resources to accommodate increasingly complex populations with medical and behavioral health needs.  States also were focused on coordinating MFP with the ACA’s new and expanded LTSS rebalancing options, such as the Balancing Incentive Program, and on the expansion of MLTSS.  Twenty-four MFP states reported operating or planning an MLTSS program that will include MFP participants.  States also reported working with the Centers for Medicare and Medicaid Services to navigate enrolling MFP participants in the new financial and administrative alignment demonstrations for dually eligible beneficiaries.

Looking ahead, 2014 will be a transformative year for the Medicaid program, as millions of individuals become newly eligible and states adjust to the ACA’s eligibility and enrollment changes.  Managing multiple competing demands will be a challenge for MFP program staff, especially those simultaneously involved in the Balancing Incentive Program and other new ACA LTSS options.  Lessons learned from MFP will help states prioritize resources and build on existing rebalancing efforts.  MFP participants repeatedly cite increased independence, regained freedom, and greater access to the community as key benefits of moving home.3  Increased outreach about HCBS (often provided by Aging and Disability Resource Centers), support and training of HCBS providers, flexible benefit design such as access to a one-time allowance to cover moving expenses and home modifications, and enhanced federal funding all have contributed to helping thousands of Medicaid MFP beneficiaries return to the community.