How is the ACA Impacting Medicaid Enrollment?

Even though most observers remain focused on the ACA’s Medicaid expansion, the ACA strengthens and improves Medicaid in other key ways that will increase Medicaid enrollment. Overall, there are three main changes the ACA makes to eligibility and enrollment that are expected to contribute to Medicaid enrollment gains (Figure 1): 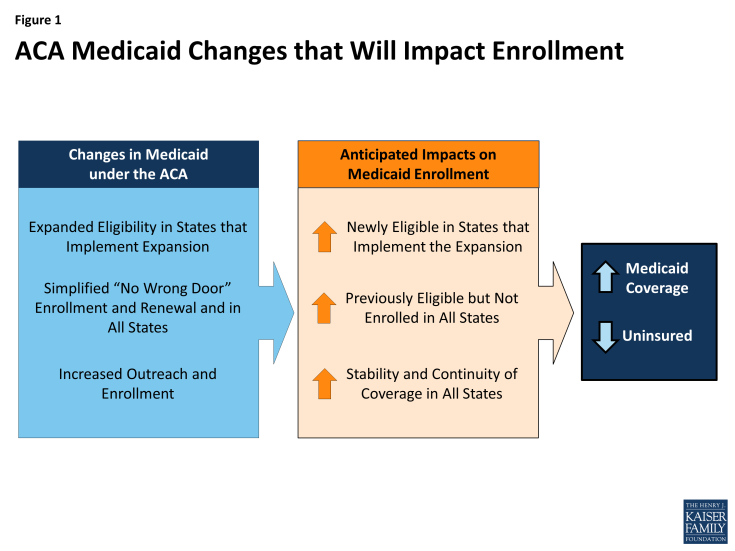 Together, these three key changes are expected to lead to increased Medicaid coverage and a reduction in the number of uninsured. In states that expand Medicaid, there will be enrollment gains among adults made newly eligible by the expansion. But, in all states, the simpler enrollment processes and broad outreach and enrollment efforts will promote increased enrollment among individuals who were already eligible for Medicaid before the ACA, but not enrolled, many of whom are children. Prior to the ACA, these individuals may not have known that coverage was available, did not think they would be eligible, or may have encountered difficulties enrolling. 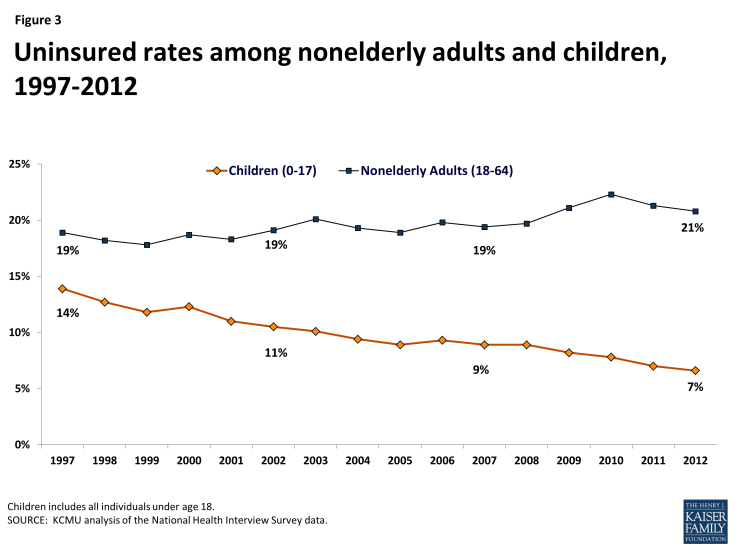 CMS recently began publishing monthly reports as part of an initiative to provide data on a broad set of Medicaid and CHIP eligibility and enrollment performance indicators to inform program management and oversight.2 This type of timely data had never before been reported and is providing some of the fastest insights on national Medicaid enrollment in the program’s history. The initial monthly reports provided data on the number of applications submitted and eligibility determinations made for Medicaid and CHIP. The press and assorted experts focused on trying to tease out what share of these determinations were attributable to the ACA and, in particular, the Medicaid expansion. However, it was difficult to disentangle the impacts of the ACA given the limitations of the data. Beginning in its April 2014 report, CMS also began reporting data on total Medicaid and CHIP enrollment. The addition of this data represents progress toward the agency’s goal of reporting a broader set of performance indicators and allows for greater insight into the ACA’s impact on enrollment. To date, CMS has reported point-in-time total Medicaid enrollment as of February 2014 and March 2014, as well as average monthly enrollment data for a comparison period prior to open enrollment (July through September 2013).  However, the data are new and remain subject to gaps, inconsistencies and limitations.

The CMS data show that between the comparison period prior to open enrollment (July to September 2013) and March 2014, total Medicaid and CHIP enrollment grew by over 4.8 million people (from 58.9 to 63.7 million) among the 47 states reporting data for both periods. Nearly all of this growth occurred among the reporting states implementing the Medicaid expansion. In the states expanding Medicaid that reported data for both periods, enrollment grew by 4.2 million (from 34.1 to 38.3 million). In states that are not expanding Medicaid and that reported data for both periods enrollment grew by just over 643,000 people (from 24.7 to 25.4 million).3 This growth reflects a combination of increased enrollment among newly eligible adults in states that have implemented the Medicaid expansion and increased enrollment among previously eligible individuals in all states due to changes in enrollment processes and stronger outreach and enrollment efforts. In the non-expansion states, it is likely that most enrollment gains have been among children, given that children make up most of the eligible but not enrolled uninsured population due to the higher income eligibility levels for children and limited eligibility for adults in these states. The 4.8 million enrollment increase does not reflect the 950,000 individuals enrolled under early expansions in seven states, since most individuals enrolled in these expansions were already enrolled in Medicaid by the July-September 2013 comparison period before the ACA.4 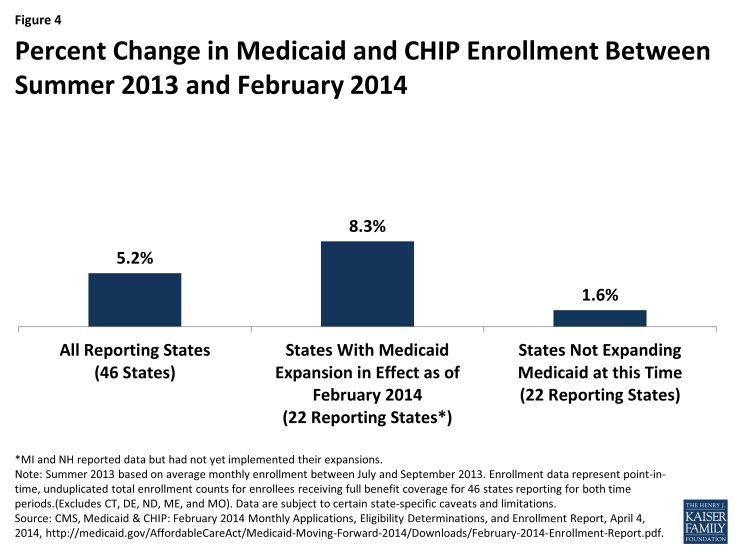 Figure 4: Percent Change in Medicaid and CHIP Enrollment Between
Summer 2013 and March 2014

What have we learned from the new enrollment data?

The recent enrollment data from CMS show strong growth relative to previous enrollment trends. Earlier Medicaid and CHIP enrollment data collected and analyzed by the Kaiser Commission on Medicaid and the Uninsured for multiple years show that enrollment growth was slowing prior to the beginning of open enrollment as economic conditions continued to improve, at 1.4 million between June 2011 and 2012 and 1.0 million between June 2012 and 2013 (Figure 5).6 The CMS-reported enrollment gain of 4.8 million between summer 2013 and March 2014 is greater than enrollment trends at the height of the most recent economic downturn, which peaked at 3.6 million between June 2008 to 2009 and June 2009 to 2010. Although these earlier data are not directly comparable to the new CMS data because not all states reported to CMS and there are differences in data adjustments, they both similarly report monthly point-in-time enrollment. Comparing the recent enrollment change reported by CMS to earlier trends suggests that the ACA policy changes are having a positive impact on enrollment. However, it is important to recognize that additional factors may also be influencing enrollment, including seasonal fluctuations, changing economic conditions, and overall population growth. 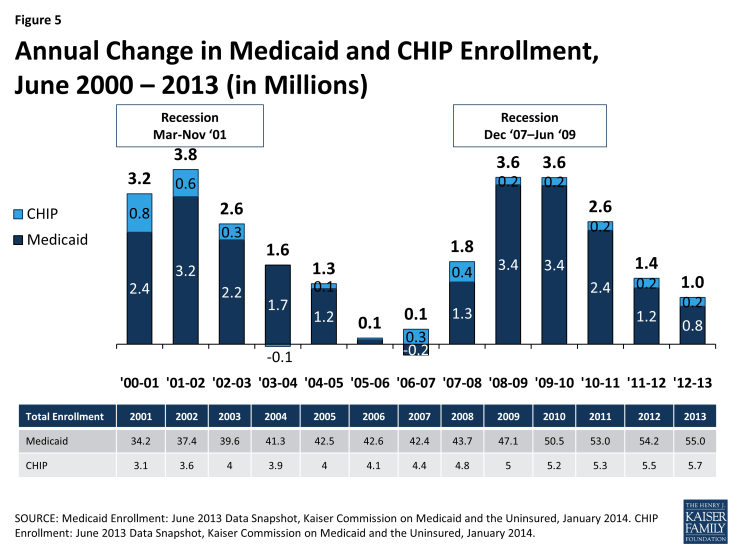 Even with the new enrollment data, it remains challenging to quantify and separately identify the impacts of the specific ACA policies on enrollment. Although, in principle, it should be relatively easy to calculate the number of adults enrolled in the Medicaid expansion in the states that have expanded, the reality has proven challenging. Many state systems are not yet able to track enrollment in this group separately and report in real-time. Only a few states (such as Washington) have reported data on the number of people enrolling in the expansion group, and it is not possible to extrapolate from a few states to estimate the entire expansion population accurately. In addition, the CMS enrollment data are for overall enrollment and do not separately identify expansion enrollees. In the future, data on expansion enrollees will become available when states begin requesting payments for the higher federal matching rate provided for adults made newly eligible by the Medicaid expansion. It also is difficult to identify how many people are enrolling in Medicaid as a result of the new, simpler processes or as a result of the ACA’s broad outreach and enrollment efforts. Unlike the Marketplaces, Medicaid was an existing program with ongoing enrollment at the time the ACA was implemented, so separating usual enrollment changes from ACA-driven changes is complex. In contrast, the Marketplaces are entirely new entities created by the ACA, so any enrollee in the Marketplace is, by definition, new and growth in enrollment over time can be more easily measured and compared across states.

The new enrollment data reported by CMS suggest that the ACA is having a strong positive impact on Medicaid enrollment, particularly in states that have implemented the Medicaid expansion. However, ultimately the key measure of the ACA’s success will changes in the number of uninsured. Early survey findings show promising reductions in the uninsured rate to date. However, fully assessing the impact of the ACA will require monitoring changes in coverage over longer periods of time to determine changing patterns in health insurance coverage and access to care and the extent to which individuals are able to maintain continuous coverage. While waiting for these measures is challenging, they ultimately will provide the most meaningful measures of the ACA’s progress in achieving its broader coverage goals. In the meantime, the data released by CMS is expected to continue to improve and expand over time, allowing for greater analysis, and surveys like the Kaiser Survey of Low-income Americans will provide insight into low-income consumers’ experiences to provide greater understanding about the impact of the ACA on the low-income uninsured.7

This insight was prepared by Vikki Wachino from NORC at the University of Chicago and Samantha Artiga and Robin Rudowitz from the Kaiser Family Foundation.