In June 2013, over 5.7 million children were enrolled in the Children’s Health Insurance Program (CHIP.) Enrollment in June 2013 increased by 190,453 or by 3.4 percent, compared to one year earlier. Since 2009, annual rates of growth have remained fairly steady, ranging between 3.2 percent and 3.8 percent. In contrast, during the height of the Great Recession, enrollment increased annually by 7.8 to 10 percent. (Figure 1) 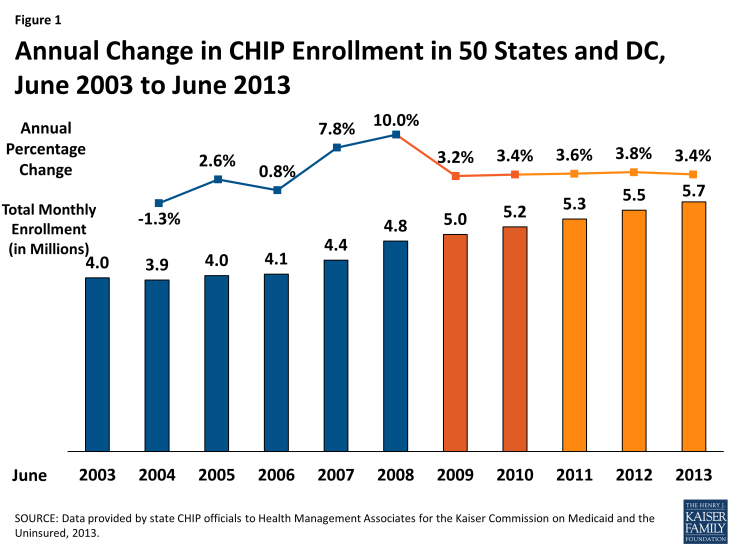 CHIP, combined with Medicaid, provide a crucial safety net of coverage for low-income children. Both programs, aided by maintenance of eligibility (MOE) provisions maintained under the Affordable Care Act (ACA) helped to stave off increases in the number of uninsured children. Between 2007 and 2012, the uninsured rate for children dropped from 10.9% to 9.2%, despite a decline in the share of children with employer-sponsored coverage.1 CHIP offers coverage to low-income children in families without access to affordable coverage but with incomes above Medicaid levels.  Economic conditions provide upward and downward pressure on CHIP enrollment. During the economic downturn, many Americans lost jobs and incomes declined, making children in such families eligible for CHIP. However, as family incomes continued to fall, children moved from CHIP to Medicaid.

Policy actions at the federal level have also affected CHIP enrollment. In addition to reauthorizing CHIP through 2015, the Children’s Health Insurance Program Reauthorization Act (CHIPRA) provided performance bonuses through FFY 2013 for states that increased enrollment of children who are eligible for Medicaid coverage but not enrolled and adopt enrollment simplifications. The last performance bonuses were awarded December 30, 2013 for FFY 2013. Over $307 million in such bonuses were awarded to twenty-three states, all of which had also been awarded bonuses in the prior year. Additionally, 15 states received a tier 2 bonus, indicating they exceeded their enrollment targets by more than ten percent.2

In addition to the MOE provisions mentioned above, which require states to maintain eligibility levels until 2019 for children, CHIP programs also face the same ACA requirements in terms of enrollment simplifications, coordination with Medicaid and the new Marketplaces, as well as the use of Modified Adjust Gross Income beginning in 2014. The ACA requires that Medicaid cover children with incomes up to 133 percent of the federal poverty level (FPL) as of January 2014. Before this change, states were required to cover children under the age of six in families with income of at least 133 percent FPL and school-age children and teens with incomes up to 100 percent FPL in Medicaid.   Many states already covered children with incomes up to 133 percent FPL in Medicaid, but due to the change in law, 21 states needed to transition some children from their CHIP state plans to their Medicaid state plans.

A few of these 21 states decided to move these children before the requirement was in place. New York and Colorado implemented an early transition of children from CHIP to Medicaid but are maintaining separate CHIP programs. Meanwhile, New Hampshire and California moved or are in the process of transitioning all CHIP kids to Medicaid, not just these older children with incomes under 133 percent FPL. The remaining 17 states will transition an estimated 13 percent to 48 percent of their CHIP coverage to Medicaid.3  These children remain eligible for the Title XXI Federal CHIP match rate.

This CHIP enrollment report series has always included Title XXI-funded enrollees only (children enrolled in both Medicaid expansion CHIP programs and stand-alone CHIP programs) while its companion Medicaid enrollment report has included Title XIX-funded enrollees only; this has ensured an unduplicated count between Medicaid and CHIP children. Because of difficulties in identifying which of these children are in fact being transitioned and to continue to ensure unduplicated counts with the companion report for Medicaid, these older children are still included as CHIP enrollees in this report. Therefore, the early transitions described above are accounted for within CHIP in this report.

Arizona’s CHIP program, KidsCare, has been closed to new enrollment since December 2009 due to state budget shortfalls. CHIP enrollment steadily declined for several reporting periods, reaching its lowest level in over a decade in June 2012. However, the state opened a new, temporary program, KidsCare II, in May 2012 for approximately 20,000 children with incomes between 100 and 175 percent FPL.4 Between June 2012 and June 2013, CHIP enrollment in Arizona more than doubled as 30,973 more children had enrolled in coverage. The program was scheduled to end in January 2014. However, the state recently received approval to extend coverage for children with incomes above 133 percent FPL through January 31, 2014 to provide additional time to transition to coverage through the Federally Facilitated Marketplace.5

In contrast, CHIP enrollment declined in 22 states between June 2012 and June 2013. (Figure 2) A number of these declines were relatively small, A number of these states also saw growth among children eligible for Medicaid during this period as well, including Indiana, Maine, and Nevada, which had the largest percentage declines during this period.6 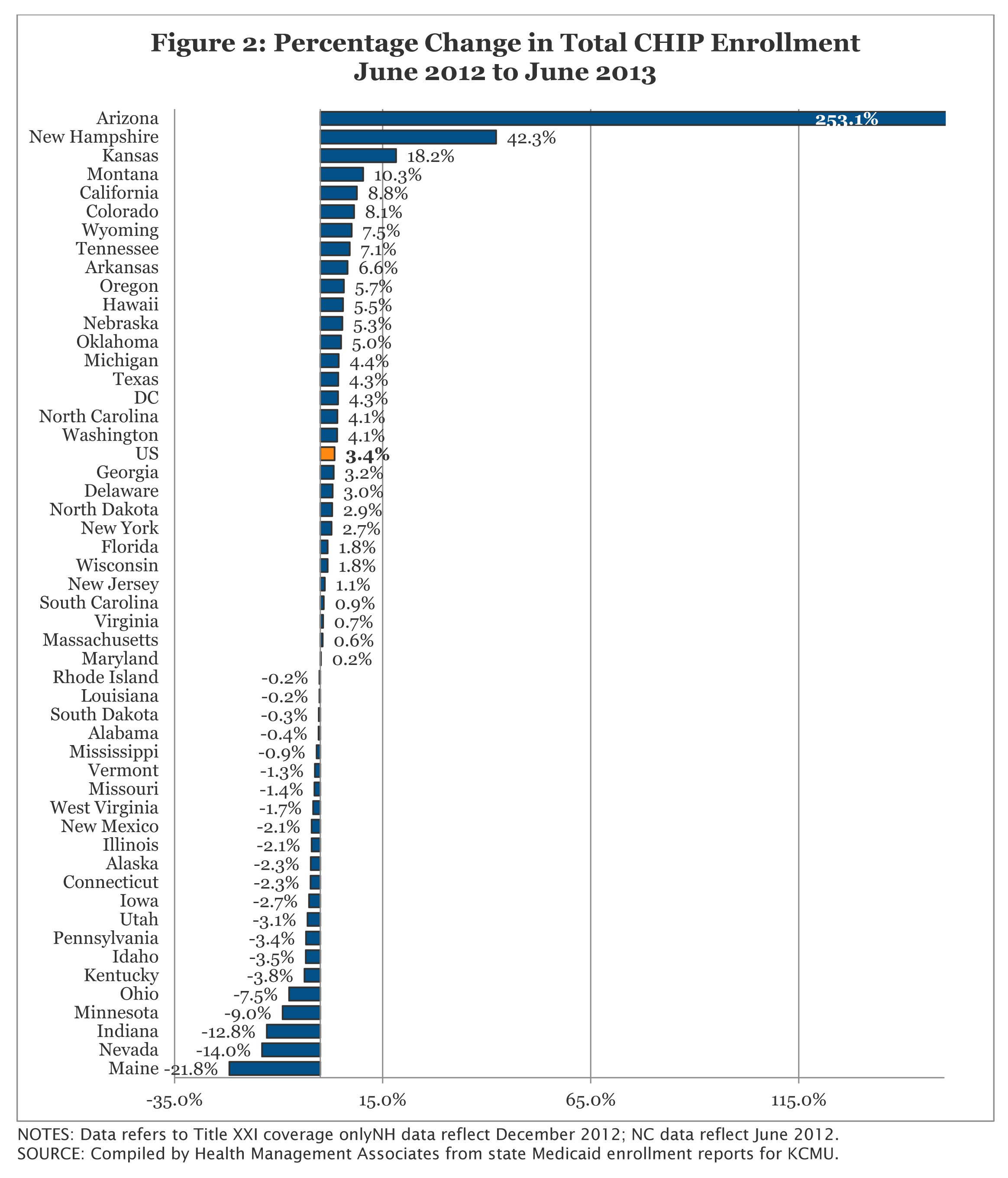 In terms of percentage change from one year to the next, enrollment in 2013 grew at a slower pace than in the prior annual period in 32 states. The only four states that experienced double digit growth were Arizona, Kansas, Montana, and New Hampshire.

CONCLUSION. Overall, CHIP enrollment continued to increase, but growth slow to the lowest rates since the start of the Recession as the economic conditions continued to improve. CHIP programs, along with state Medicaid programs continue to play a critical role in assuring health coverage for uninsured children.

This Data Snapshot was prepared by Vernon K. Smith of Health Management Associates along with Laura Snyder and Robin Rudowitz of the Kaiser Family Foundation.