A Look at Strategies to Address Behavioral Health Workforce Shortages: Findings from a Survey of State Medicaid Programs

The pandemic has exacerbated mental health and substance use issues and 90% of Americans believe the nation is in the midst of a mental health crisis. Despite increases in need, data show that treatment rates across all payers are low. Documented workforce challenges contribute to barriers in access to care and nearly half of the US population – 47% or 158 million people – living in a mental health workforce shortage area. Behavioral health conditions (i.e. mental health and substance use disorders) are most prevalent in Medicaid enrollees, with data from 2020 showing that approximately 39% of Medicaid enrollees were living with a mental health or substance use disorder. Workforce challenges are widespread and go beyond Medicaid, but shortages may be exacerbated in Medicaid. On average, only 36% of psychiatrists accept new Medicaid patients – lower compared to other payers and compared to rates for physicians overall (71%). Even when providers accept Medicaid, they may only take a few patients or may not be presently taking new Medicaid patients. There is attention at the federal level to address workforce shortages—and states are also taking action to address these issues for Medicaid enrollees and more broadly. The Consolidated Appropriations Act passed in December 2022 authorized additional provisions to address workforce shortages, including new psychiatry residency positions, removal of additional requirements for providers who want to prescribe certain medications for opioid use disorder (OUD), requirements for improved Medicaid provider directories, and new funds that can be used toward workforce initiatives for peer support providers.

We surveyed state Medicaid officials about their state’s strategies for addressing behavioral health workforce shortages that were in place in state fiscal year (FY) 2022 or implemented/planned for FY 2023. These questions were part of KFF’s Behavioral Health Survey of state Medicaid programs, fielded as a supplement to the 22nd annual budget survey of Medicaid officials conducted by KFF and Health Management Associates (HMA). A total of 44 states (including the District of Columbia) responded to the survey, but response rates varied by question. 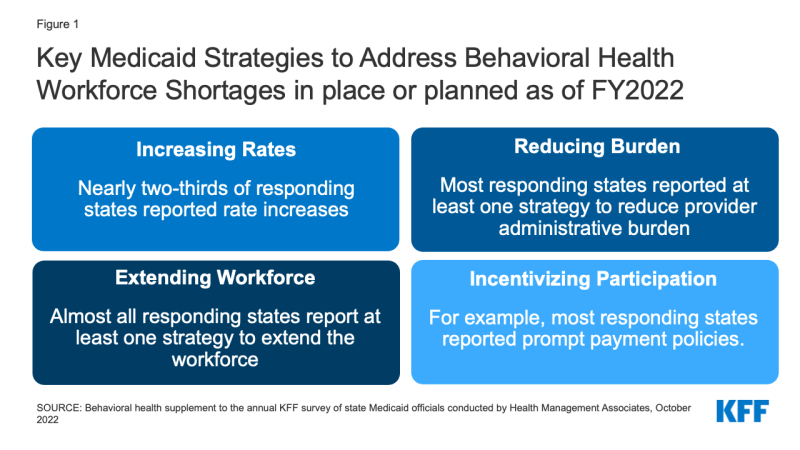 Gaps in access to certain providers, especially psychiatrists, are an ongoing challenge in Medicaid and often in the broader health system due to overall provider shortages and geographic maldistribution of behavioral health providers. Lower Medicaid payment rates (relative to other payers) as well as disparities in pay between physical and mental health providers could limit participation in Medicaid and further exacerbate existing workforce shortages. Psychiatrists, for example, receive lower Medicaid reimbursement than primary care providers for similar services. States have considerable flexibility to set provider payment rates in fee-for-service. Managed care plans, which now serve most Medicaid beneficiaries, are responsible under their contracts with states for ensuring adequate provider networks and setting rates to providers, but states have several options to ensure that rate increases are passed to the providers that contract with managed care organizations (MCOs). The American Rescue Plan Act (ARPA) gave states temporary funding (primarily through an increase in the Medicaid match rate for home and community based services (HCBS)) to increase certain provider rates or provide payments to attract or retain workers. COVID-19 Medicaid public health emergency (PHE) authorities gave states additional flexibility to adopt temporary rate increases.

Many states report the use of ARPA HCBS funds to temporarily increase behavioral health provider rates. For example, behavioral health providers in Ohio have been approved to receive a one-time payment equal to 10% of claims paid in FY 2021. In some states, rate increases were targeted to specific provider types, such as increases to residential level of care for SUD or increases for applied behavioral analysts. Other states implemented increases that were more widespread. For example, the state of Oregon directed its Medicaid coordinated care organizations to increase the rates of behavioral health providers: a 30% increase for providers who receive 50% or more of their revenue from Medicaid; 15% increase for providers who receive less than 50% Medicaid revenue; and additional differentials for certain types of care (such as culturally or linguistically specific services). Missouri and Oklahoma are increasing some provider rates to be more in line with Medicare rates. In most states that contract with MCOs, states reported that they would require MCOs to implement the FFS rate increases (for example, through a state-directed payment). A smaller share of MCO states do not require, but may encourage, MCOs to implement FFS rate increases.

Given the substantial behavioral health workforce shortage, many state strategies focus on options that extend the workforce such as reimbursing for new provider types, adding provider types that can bill without a supervising practitioner, loosening restrictions on in-person requirements (such as telehealth or interprofessional codes), or reimbursing for care delivered by trainees or the license-eligible workforce. Each state has its own set of laws and regulations that set standards and specify the scope of practice for different provider types. Medicaid agencies have flexibility to decide which types of providers and services are eligible for reimbursement, as well as the settings in which those services must be provided, though there may be some variation across MCOs.

Nearly all responding states reported they had at least one strategy in place or planned for FY 2022/2023 to expand the workforce, such as extending the types of providers that could bill for services, using inter-professional consultation codes, or engaging in outreach efforts to recruit new providers (Figure 3). Most states with MCOs reported that requirements in FFS were also required for MCOs. Adding peer or family specialists as providers was the most commonly reported strategy for expanding the workforce. In addition, some states reported extending direct reimbursement privileges to other types of mental health practitioners. For example, New Jersey now includes licensed clinical social workers as a type of provider that can bill independently. Nearly two-thirds of responding states reimburse services delivered by individuals who are license-eligible and practicing under supervision as of FY 2022. Less common strategies included Medicaid reimbursement for inter-professional consultations and targeted recruitment efforts, with around one-third of reporting states having either of these strategies in place as of FY 2022. Interprofessional consultation codes can extend the workforce by allowing general providers to be reimbursed for consultations with specialists. For example, with this code, a rural primary care provider could get reimbursed for a consultation with a psychiatrist to discuss medication management for a patient with a serious mental illness. State interest in interprofessional consultations may increase following recent CMS guidance stating that interprofessional consultation can be covered as a distinct service.

About three-quarters of responding states reported at least one strategy in place or planned for FY 2022/2023 to reduce provider administrative burden both in FFS and/or MCOs (Figure 4). States most frequently reported seeking behavioral health provider feedback on administrative processes, followed by implementing centralized or standardized credentialling. Notably, multiple states reported plans to implement centralized or standardized provider credentialing in FY 2023, suggesting growth in the adoption of this strategy. Somewhat fewer states reported standardized prior authorization, treatment plan forms, or initial number of units or days for prior approved services.

Notably, the authority of state Medicaid programs to independently reduce administrative burden may vary by state, with some Medicaid programs having this authority independent of other state agencies, and others sharing it. As an example, one state noted that their state’s behavioral health authority also regulates documentation, so efforts to streamline documentation require collaboration between the two agencies.

Delays in reimbursement have been shown to reduce provider participation in Medicaid, leading some Medicaid agencies to adopt prompt payment policies to incentivize provider participation (in addition to federal prompt pay requirements). In North Carolina, for instance, health plans must notify providers within 18 calendar days of any additional information needed to process a claim and they must pay for approved clean claims within 30 calendar days. Some states may choose to use financial incentives to encourage providers to participate in integrated physical and behavioral health systems, with some incentives aimed at increasing behavioral health screenings or developing the workforce. Financial incentives for integrated care may result in more facilities providing behavioral health care. Provider participation may also be encouraged through student loan repayment programs or other efforts to grow the workforce.

Most states reported prompt payment policies in place in FY 2022 or planned for FY 2023, but fewer reported financial incentives for integrated behavioral health care (Figure 5). As of FY 2022, about two-thirds of reporting states have prompt payment policies in place in FFS and/or MCOs. Fewer states reported providing financial incentives to providers to participate in physical and behavioral health integration, with less than one-fifth of responding states reporting doing so for FFS and/or MCOs in FY 2022.

Some states reported strategies to grow the workforce or to create new training opportunities, including efforts such as student loan repayment, outreach, and clinical supervision. For example:

State Medicaid program efforts to bolster the behavioral health workforce track with continued efforts at the federal level. In December 2022, Congress passed the Consolidated Appropriations Act, which authorized the funding for at least 100 new residency positions dedicated to psychiatry. Additionally, provisions in the Act will substantially increase the number of providers authorized to prescribe buprenorphine for the treatment of OUD by eliminating additional administrative requirements to prescribe buprenorphine to patients with OUD. The Act will also require additional training on treating and managing patients with OUD or SUD for all prescribers of controlled substances. Other relevant provisions include grants for mental health peer support providers and requirements to improve the accuracy and usability of Medicaid provider directories, which have been shown to be particularly inaccurate for mental health. A number of these provisions were included in bipartisan legislative drafts produced by the Senate Finance Committee.

This work was supported in part by Well Being Trust. KFF maintains full editorial control over all of its policy analysis, polling, and journalism activities.