Half of Adults Say Their Families Have Experienced a Severe Mental Health Crisis, Including One in Four Who Say a Family Member Engaged in Cutting or Other Self-Harming Behaviors

An overwhelmingly majority (90%) of Americans believe the nation is in the midst of a mental health crisis, and young adults appear to be suffering the most, a new KFF-CNN survey on mental health in America reveals.

In addition, about a third (35%) of young adults say they have been unable to work or engage in other activities due to a mental health condition in the past year, a rate significantly higher than older adults. 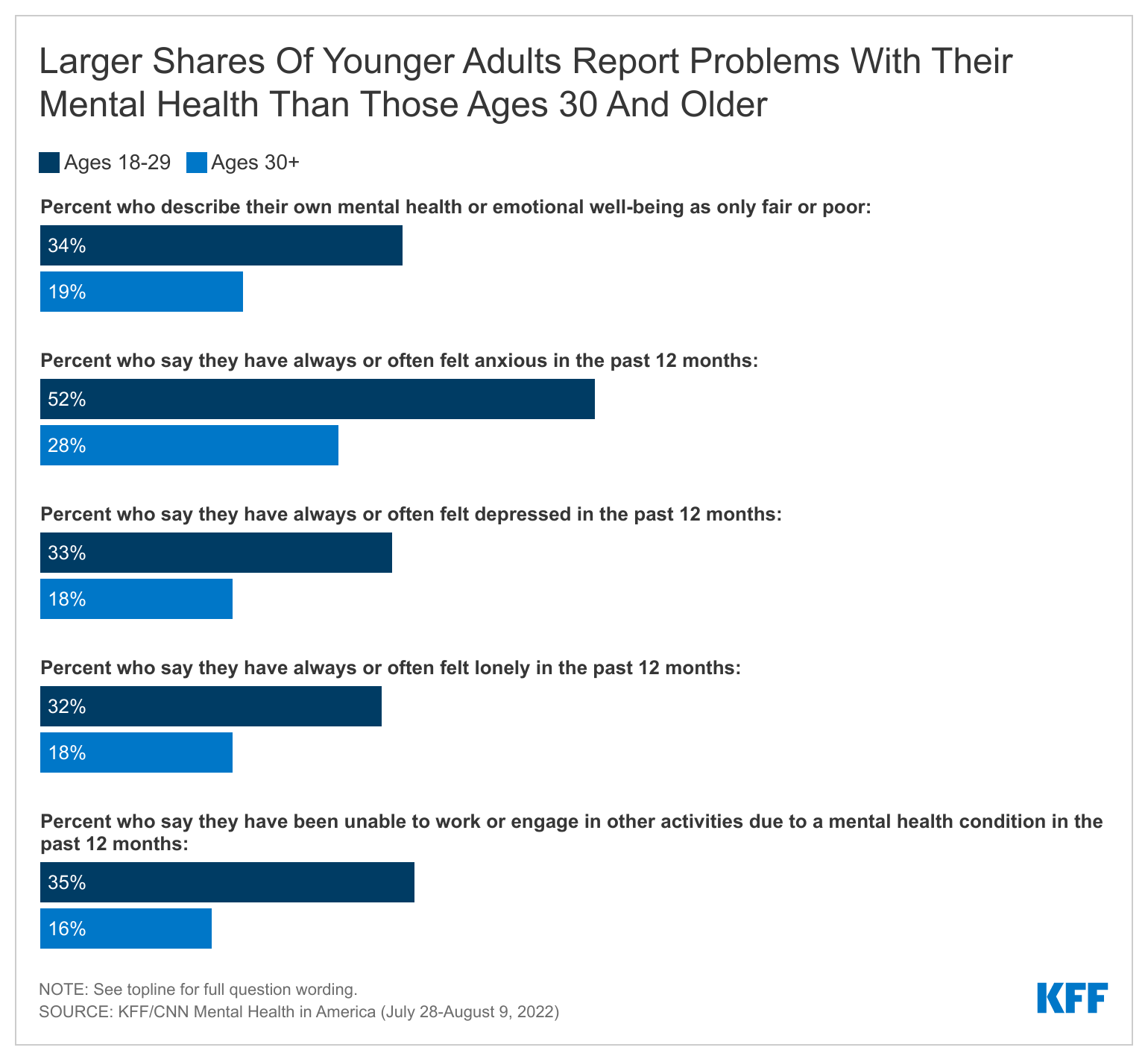 Featured this week on air at CNN and online at cnn.com, the partnership survey provides an in-depth look at Americans’ views and experiences around mental health, including those who personally report the most difficulty and those with direct family experiences involving severe crises.

The survey reveals how deeply mental health issues affect families, with half (51%) of all adults nationwide saying that their families have experienced a severe mental health crisis. This includes about one in four who say that a family member received in-person treatment because they posed a threat to themselves or others (28%) and that a family member engaged in cutting or other self-harming behaviors (26%).

When asked about their own mental health and emotional well-being, most of the public rates their situation positively, though about one in five (22%) rate their situation as “only fair” or “poor.”

In addition to younger adults, lower-income adults (31%); those who identify as lesbian, gay, bisexual or transgender (36%); and those in fair or poor physical health (48%) are more likely than their counterparts to rate their own mental health negatively.

When asked about major sources of stress in their lives, four in ten (39%) adults cite their personal finances, making it the top stressor ahead of politics and current events (32%), relationships with family and friends (24%), and work (24%). Personal finances are especially worrisome for those in lower-income households – six in ten (61%) cite them as a major source of stress.

Among those who did not get care, equal shares say that the main reason was because they could not afford the cost (20%), they were too busy or could not get the time off work (20%), or they were afraid or embarrassed to seek care (20%). Other main reasons include not being able to find a provider (13%), not knowing how to find services (7%), and their insurance wouldn’t cover it (8%).

While most people say they know who they would call or how to seek help in a mental health crisis, more than a quarter (27%) do not, including even larger shares of people without health insurance (47%) and Hispanic adults (34%).

In July, the U.S. transitioned the phone number for the National Suicide Prevention Lifeline to a federally mandated three-digit number, 988, that is intended to be easier for people to remember.

Despite the low levels of awareness, when informed about the new hotline, a large majority (85%) say that they would be at least “somewhat” likely to call the number if they or a loved one were experiencing a mental health crisis. This includes large majorities of Black, White, and Hispanic adults.

The public’s interest in 988 may in part reflect mixed perceptions about the usefulness of calling 911 during a mental-health crisis. While about half (52%) think that calling 911 would “help the situation” if they or a loved one was having a mental health crisis, about a quarter (27%) of the public say it would “do more to hurt the situation.”

The poll was jointly developed and analyzed by CNN and the Kaiser Family Foundation’s polling and survey research group and was conducted July 28-August 9, 2022 among a random national probability-based sample of 2,004 adults ages 18 and older, including 398 parents. Interviews were conducted online and on the phone, in English and Spanish, by SSRS of Media, Pa. The results from the full survey have a margin of sampling error of plus or minus 3 percentage points. Each partner bears responsibility for its editorial content about the poll.