Medicaid Enrollment: An Overview of the CMS April 2014 Update

The Centers for Medicare and Medicaid Services (CMS) recently released its latest update on Medicaid and Children’s Health Insurance Program (CHIP) enrollment data, covering the period through April 2014. The report is the most recent in a series of monthly reports on indicators on Medicaid and CHIP application and enrollment produced as part of a performance indicator initiative designed to support program management and policy making. This fact sheet provides a brief overview of the latest data and what it suggests about the impact of the Affordable Care Act (ACA) on Medicaid and CHIP enrollment. Data by state is available here.

The latest report shows continued growth in Medicaid and CHIP enrollment across states. This continued growth reflects the fact that enrollment in the programs is not limited to the open enrollment period for Marketplace coverage and continues year-round. Preliminary data for April 2014 show that 1.1 million additional people enrolled in April compared to March in the 48 states that reported data for both periods, bringing total Medicaid and CHIP enrollment to over 65 million. With this latest increase, over 6 million additional individuals have enrolled in Medicaid and CHIP compared to average monthly enrollment in the three months leading up to the start of open enrollment in October 2013. This represents an average enrollment growth rate of 10.3% between summer 2013 and April 2014 across all 48 states that reported data for both periods, but there are wide variations in reported growth across states.

Enrollment growth in states that have expanded Medicaid to low-income adults outpaced the national average and was significantly higher than growth in non-expansion states (15.3% vs.3.3%) (Figure 1). Among the 24 states that have implemented the Medicaid expansion and reported data for both periods, 18 states reported growth above 10%, including 8 states that reported growth exceeding 30%.1 The variation in growth among these states, in part, reflects differences in the size of the Medicaid expansion relative to their previous Medicaid eligibility levels. For example, states that had already expanded Medicaid to low income adults will experience a smaller increase than those who previously offered coverage to very low-income parents. In contrast, enrollment growth among the non-expansion states was below 10% in nearly all (21 of 23) states reporting data for both periods, with 16 states reporting growth below 5% including 4 states that reported net declines in enrollment over the period.2 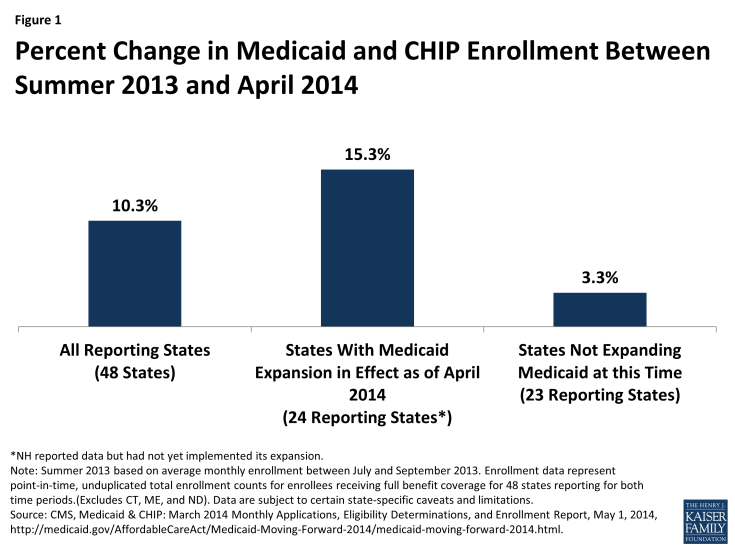 Figure 1: Percent Change in Medicaid and CHIP Enrollment Between Summer 2013 and April 2014

These recent enrollment increases are higher than historic enrollment trends from other data sources. Historic data show that Medicaid and CHIP enrollment grew by 8.5% across all states at the height of the most recent economic downturn, and then growth slowed to 1%-3% between December 2011 and 2013 as economic conditions improved (Figure 2). Among Medicaid expansion states, reported enrollment growth since open enrollment began far exceeds these historic trends. Reported growth in the non-expansion states is closer to the most recent historic trends, but does suggest some increased enrollment activity compared to earlier periods.3 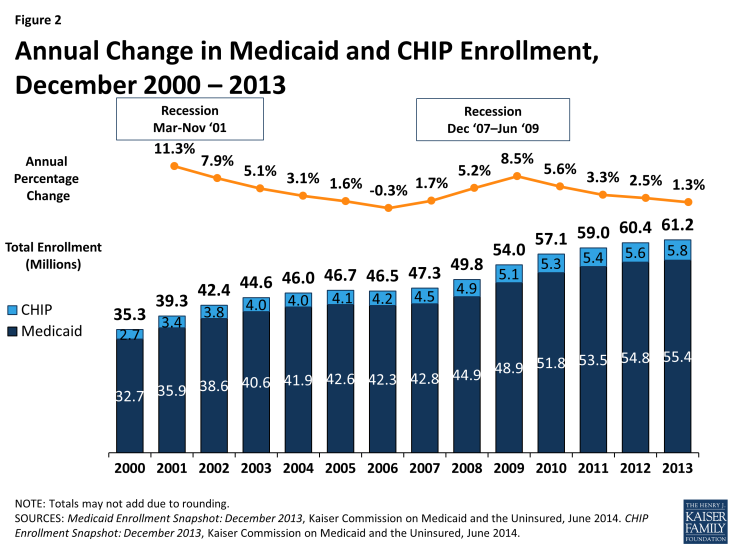