In December 2013, nearly 5.8 million children were enrolled in the Children’s Health Insurance Program (CHIP.) Enrollment in December 2013 increased on net by 175,020 or by 3.1 percent, compared to one year earlier. Since 2011, annual rates of growth have remained fairly steady, hovering around 3 percent. In contrast, during the height of the Recession, enrollment increased annually by 6.9 to 8.1 percent. (Figure 1, Appendix Tables 1 and 2) 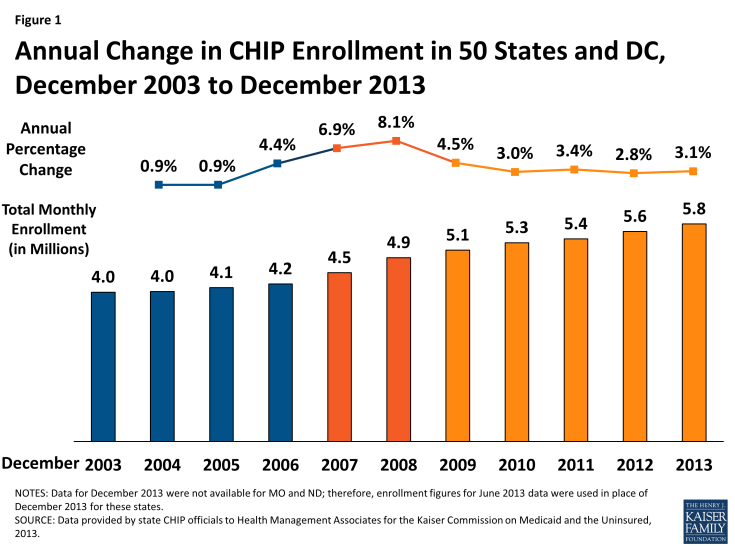 CHIP, combined with Medicaid, provides a crucial safety net of coverage for low-income children. Both programs, aided by maintenance of eligibility (MOE) provisions maintained under the Affordable Care Act (ACA) helped to stave off increases in the number of uninsured children. Between 2007 and 2012, the uninsured rate for children dropped from 10.9% to 9.2%, despite a decline in the share of children with employer-sponsored coverage.1 While the MOE provisions for adults ended in January 2014, the MOE provisions for children remain in effect until October 2019. However, the ACA only extended CHIP funding through October 2015; Congress would need to appropriate additional funds in order for allotments to be available after October 2015. This, combined with the advent of new coverage options available through the marketplaces, raises questions about the program’s future role. 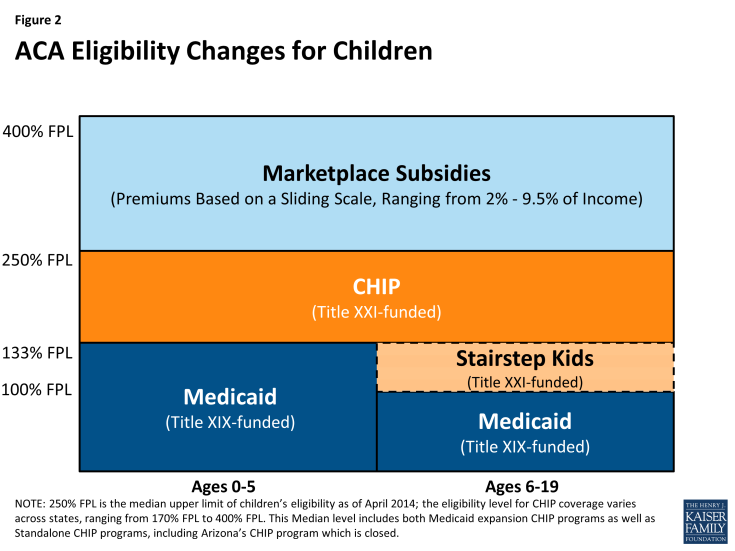 A few of the 21 states that covered “Stairstep” children under separate CHIP programs decided to move these children before the requirement was in place. New York and Colorado implemented an early transition of children from CHIP to Medicaid but are maintaining separate CHIP programs. Meanwhile, New Hampshire and most recently California transitioned all CHIP kids to Medicaid, not just these older children with incomes under 133 percent FPL. The remaining 17 states will transition an estimated 13 percent to 48 percent of their CHIP coverage to Medicaid.4

Note About this Report: This CHIP enrollment report series has always included Title XXI-funded enrollees only (children enrolled in Medicaid expansion CHIP programs and stand-alone CHIP programs) while its companion on Medicaid enrollment has included Title XIX-funded enrollees only; this has ensured an unduplicated count between Medicaid and CHIP children. Because of difficulties identifying which of these children are in fact being transitioned and to continue to ensure unduplicated counts with the companion report for Medicaid, these “Stairstep” children are included as CHIP enrollees in this report. Therefore, the early transitions described above are accounted for within this report rather than in the Medicaid Enrollment report.

Continued improvement in economic conditions likely resulted in both some growth as children shifted from Medicaid to CHIP and some declines as family incomes continued to increase above CHIP eligibility levels. CHIP offers coverage to low-income children in families who do not have access to affordable coverage but whose incomes are above Medicaid eligibility levels. Therefore, economic pressures provide both upward and downward pressure on enrollment. As the economy continues to improve, as it did during 2013, family income rises, which results in some children shifting from Medicaid to CHIP coverage. However, economic conditions improving can also result in some children leaving the program as income increases above CHIP eligibility levels for higher income families.During the period from December 2012 to December 2013, there were a number of factors likely influencing CHIP enrollment in different directions, most notably:

Successful outreach and enrollment efforts for new Marketplaces likely pushed enrollment up in some states.  Implementation of the major coverage provisions of the ACA had begun but had not been completed. Broad outreach efforts to encourage individuals to apply for coverage (through CHIP, Medicaid, or the Marketplaces) were well underway; such efforts in the past have been noted to apply upward pressure on CHIP enrollment. CHIP programs also face the same ACA requirements in terms of enrollment simplifications, coordination with Medicaid and the new Marketplaces, as well as the use of Modified Adjust Gross Income beginning in 2014. The full effect of these changes would occur just after this data collection period.

Problems implementing new enrollment systems for the Federally Facilitated Marketplace (FFM) and State Based Marketplaces (SBM) likely put downward pressure on CHIP enrollment growth. States and the Federal Government faced IT systems challenges, particularly early on in the open enrollment period, which may have applied some downward pressure on CHIP enrollment during this period.  States that relied on FFMs had significant problems with “account transfers” from the FFM to agencies handling CHIP enrollment. Many children were assessed or determined eligible for CHIP through the FFMs, but because of system problems, accounts could not be easily transferred to effectuate enrollment. There were also some SBMs that also faced similar issues. Although problems persist, some progress in resolving these issues was made after the timeframe for this report. 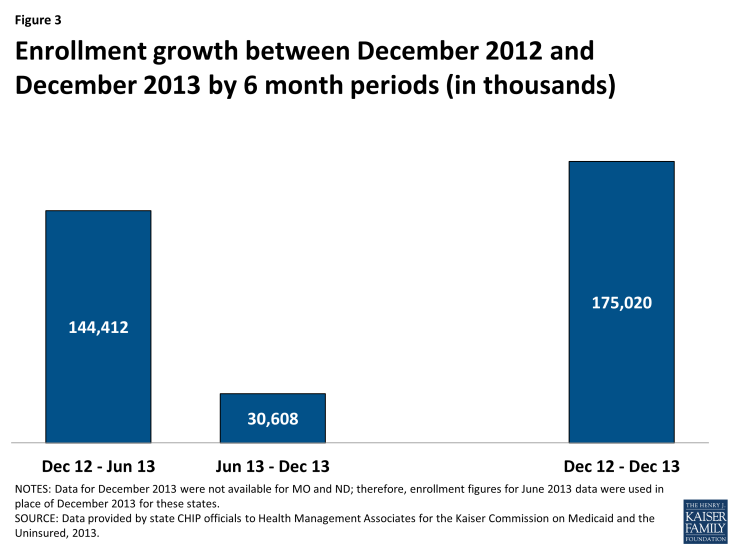 Figure 3: Enrollment growth between December 2012 and December 2013 by 6 month periods (in thousands) 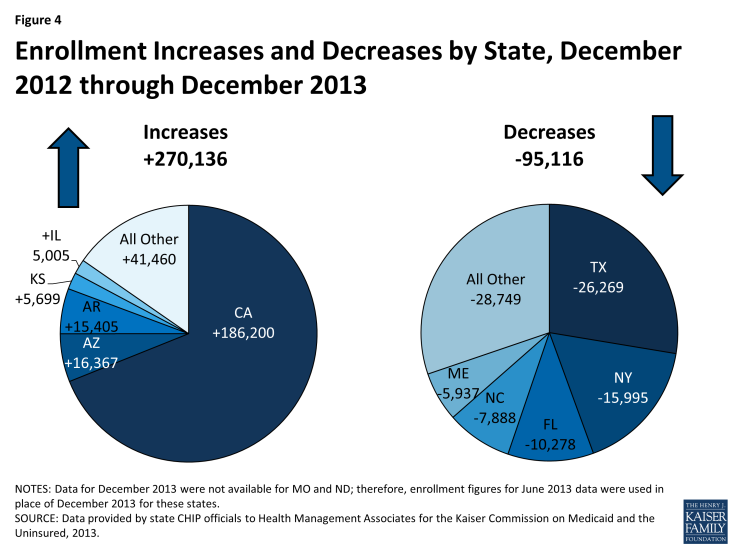 Figure 4: Enrollment Increases and Decreases by State, December 2012 through December 2013

The three states that were driving these increases include:

The largest declines in CHIP enrollment occurred in Texas, New York, and Flordia; the factors underlying these declines however are not readily apparent.

Overall, CHIP enrollment growth remained on track with previous trends, despite much slower growth seen in the second half of this period (June 2013 to December 2013.) Economic improvements apply both upward and downward pressure on CHIP enrollment; as income increases some children shift from Medicaid to CHIP while others transition off the program as their income rises above CHIP eligibility levels. Like Medicaid, CHIP programs also saw some upward (through increased outreach) and downward pressure (from enrollment systems issues) related to the implementation of the ACA. CHIP programs, along with state Medicaid programs continue to play a critical role in assuring health coverage for uninsured children. However, the future of the program remains uncertain as funding is slated to end in October 2015 unless Congress acts.