This fact sheet provides an overview of the status of action to extend federal funding for the Children’s Health Insurance Program (CHIP). Federal funding for CHIP expired on September 30, 2017. Without an extension of federal funding, states will begin running out of federal CHIP funds and face budget shortfalls. In early October, the House and Senate reported bills out of committee to extend CHIP funding. As of November 1, the House bill was amended to combine the extension of CHIP funding with an extension of funding for the Community Health Center (CHC) fund. The House is scheduled to vote on this bill on November 3rd. Final legislation to extend CHIP still requires passage by the full House and Senate, resolution of any differences between the House and Senate bills, and signature by the President. As time passes, states are facing increasing pressure as some are quickly approaching deadlines to make program changes to address the potential loss of federal funding. Without congressional action, the majority of states will face a FY2018 budget shortfall. As states run out of federal funds, some will take action to freeze enrollment or end coverage, which would lead to coverage losses for children.

Together with Medicaid, CHIP provides a strong base of coverage for our nation’s children and has helped reduce the nation’s uninsured rate for children to a record low of 5% (Figure 1). CHIP provides coverage to children in families that earn too much to qualify for Medicaid but who cannot access or afford private coverage. In 2016, CHIP covered 8.9 million children. All states have expanded coverage to children through CHIP. Some states provide CHIP through a separate CHIP program, some states have a CHIP-funded Medicaid expansion, and some states use a combination of both approaches. Reflecting these expansions, nearly all states cover children in families with incomes up to at least 200% of the federal poverty level (FPL), which is $40,840 for a family of three in 2017.1 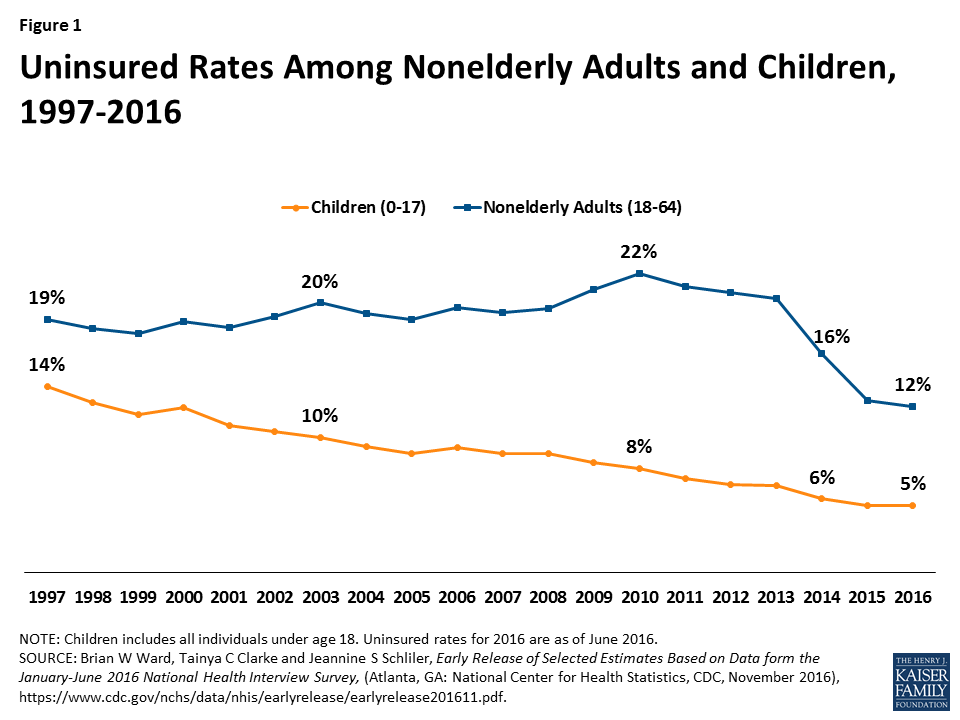 What is the Status of Federal Funding for CHIP?

Federal funding for CHIP expired on September 30, 2017. CHIP is financed in partnership by states and the federal government. The federal government matches state spending on the program up to an annual limit on federal funds. To encourage state participation when CHIP was enacted, the federal government provided an enhanced (relative to Medicaid) matching rate for CHIP, which was further increased by 23 percentage points under the Affordable Care Act (ACA). With the increase under the ACA, the CHIP matching rate ranges from 88% to 100% across states. Federal CHIP funding ended on September 30, 2017. States can still use remaining federal funds from their FY2017 CHIP allotment to operate their programs and may receive a limited amount of redistribution funding from unspent funds across all states from prior years. However, once they exhaust those funds, no additional funds will be available unless Congress enacts legislation.

How are States Affected by the Expiration of CHIP Funds?

Without action to extend federal funding for CHIP, nearly all states will face a budget shortfall because nearly all states assumed federal funding for CHIP in their FY2018 state budgets. As of Summer 2017, 11 states reported that they will exhaust federal funding for CHIP by the end of 2017 and 32 projected running out by March 2018 (Figure 2). However, state projections are fluid and some have revised their estimates since that time. Although not included in the data reported as of Summer 2017, Minnesota indicated that it would exhaust its CHIP funds by the end of September 2017. In early October, the Centers for Medicare and Medicaid Services (CMS) provided additional redistribution funding to the state, allowing the state to maintain coverage without facing a budget shortfall through October.2 CMS also provided redistribution funds to several additional states that are close to running out of funds.3 However, these redistribution funds are limited and will be exhausted if no additional funds are provided. As states exhaust federal funding, they will need to determine how to address budget shortfalls, which will likely require special legislative sessions and/or Governor action because state budgets have already been passed. States will confront challenges replacing federal dollars since many were already facing budget shortfalls heading into FY2018. 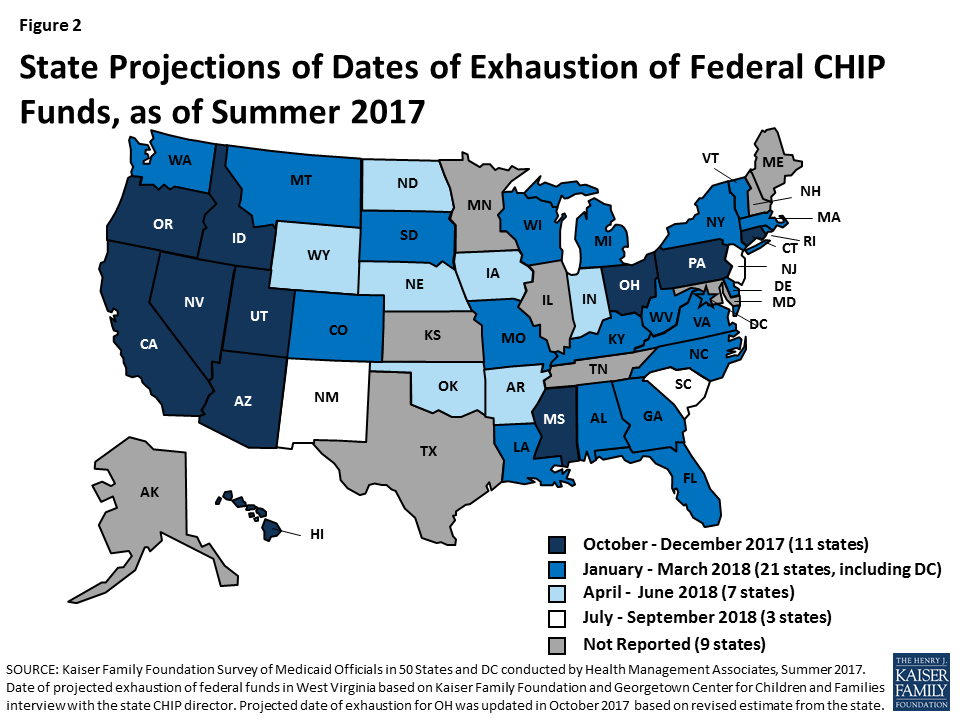 Figure 2: State Projections of Dates of Exhaustion of Federal CHIP Funds, as of Summer 2017

How Does the Expiration of CHIP Funds Affect Coverage?

Some states plan to take action to reduce CHIP coverage as federal funds run out. States with CHIP-funded Medicaid expansions are required to continue this coverage under the ACA maintenance of effort requirement, and state costs for this coverage will increase since states will receive the lower federal Medicaid match rate. However, without federal funding, states with separate CHIP coverage are not required to maintain this coverage and some states are considering reducing this coverage. For example, in late September, Utah submitted a letter to the federal government outlining its plan to freeze enrollment in its CHIP program. Similarly, on October 11, 2017, New York submitted a letter indicating its potential plans to discontinue CHIP coverage if federal funding is not extended, noting that the state would need to fill a $1 billion shortfall to continue coverage for all currently enrolled children. In addition, some states, like Arizona and West Virginia, have states laws requiring them to close enrollment or end coverage if federal funding for CHIP decreases.

States are bumping up against deadlines to make program changes since it takes time to implement changes and notify families. States need sufficient time to notify families and other stakeholders of changes in coverage, make changes to eligibility systems, and train eligibility workers. They also must update contracts with managed care plans and third party administrators, conduct Tribal consultation as necessary, and submit necessary state plan amendments to CMS. Thus, as states grow closer to exhausting federal funds, they may begin taking action to implement changes. There also is the potential for significant confusion among families and wasted spending and administrative efforts for states if they begin to implement changes and then Congress later takes action to extend funding, causing states to reverse course.

Reductions in CHIP coverage would result in coverage losses for children and negative effects on children’s health and finances. If states close enrollment and/or discontinue coverage for children in separate CHIP programs, some children could shift to parents’ employer-sponsored plans or Marketplace plans, where they would likely have higher out-of-pocket costs and more limited benefits, and some children may be transitioned to Medicaid, but others would become uninsured. Previously, when some states closed enrollment in CHIP for limited periods in response to state budget pressures, studies showed that these enrollment caps and freezes led to coverage losses, left eligible individuals without access to coverage, and had negative effects on children’s health and family finances, including delayed care, difficulty obtaining medications, and significant financial hardships and medical debt.4

What is the Status of Action to Extend Federal Funding?

The current proposed bills mirror each other with respect to proposed policy for CHIP. They both would extend federal funding for five years, extend Express Lane Eligibility, extend the maintenance of effort requirement for children in families with incomes below 300% FPL, extend funding for demonstration programs and outreach and enrollment, and transition down from the 23 percentage point increase in the federal match provided by the ACA to the regular CHIP match rate (Table 1). These proposed policies would provide stability of financing for states and time to plan for the transition down to the regular CHIP match rate as well as maintain coverage protections for children. However, the House bill includes some other provisions that were not included in the Senate bill, including delaying and increasing cuts to Medicaid Disproportionate Share Hospital (DSH) payments and providing additional Medicaid financing to Puerto Rico and relief to the U.S. Virgin Islands.5 The House bill also identifies offsets for the cost of extending CHIP funding, while the Senate bill has not identified offsets. In addition, the amended version of the House bill includes provisions related to extending funding for the CHC fund and other public health provisions as well as offsets for these costs.

Final legislation to extend CHIP still requires passage by the full House and Senate, resolution of any differences between the House and Senate bills, and signature by the President. As noted, the House is scheduled to vote on its bill on November 3rd. Timing for continued action in the Senate is unclear. If the House and Senate each pass a CHIP bill, they will then need to resolve any differences between the bills. This process could occur through a conference committee, which would require a second vote on a bill reached through compromise, or they could pass bills back and forth through each chamber until they both pass a bill with consistent language. Finally, the bill passed by both the House and Senate would go to the President, who could either sign it into law or veto it. If vetoed, the bill would then be sent back to Congress for a potential override of the veto.

CHIP has a long history of bipartisan support and has strong support from the public. In a September 2017 poll, three-quarters of the public said that it is important for Congress to work on reauthorizing funding for CHIP. Congress has taken initial steps to extend federal funding for CHIP and there is general agreement on proposed provisions related to CHIP. However, Congress still must complete a number of steps to pass final legislation, and, as part of this process, the House and Senate will need to resolve any differences between their bills and reach agreement on offsets. As Congress continues to work through this process, states are coming closer to exhausting federal funds and are beginning to bump up against deadlines to make program changes to address the loss of federal funding. As time passes, it will become increasingly likely that states will make reductions in CHIP that will result in coverage losses for children and erode the substantial coverage gains that have been achieved for children to date.