The U.S. Ending the HIV Epidemic (EHE) Initiative: What You Need to Know

The “Ending the HIV Epidemic Initiative: A Plan for America” (EHE) is a federal effort to reduce new HIV infections in the United States by 75% in five years and by 90% in ten years and includes four “pillars”: diagnose, treat, prevent and respond (see below). It was launched by the Trump Administration in 2019, building on efforts made by the Obama Administration; President Biden has also expressed commitment to “ending the HIV/AIDS epidemic by 2025” and signaled that they will continue the initiative. However, it remains to be seen if the new administration will make changes to the EHE. In addition, because of the COVID-19 pandemic, HIV programs in general, and the EHE effort, have been slowed down.

Where are the targeted jurisdictions?

During “Phase 1,” the initiative runs from 2020-2025 and focuses efforts on the regions hardest hit by the HIV epidemic. Its reach extends to the 48 counties that had the highest number of HIV diagnoses between 2016 and 2017, as well as San Juan, Puerto Rico, and Washington D.C. It also focuses on seven states with a substantial rural burden. More than 50% of HIV diagnoses in the US occur in these 48 counties, D.C., and San Juan. 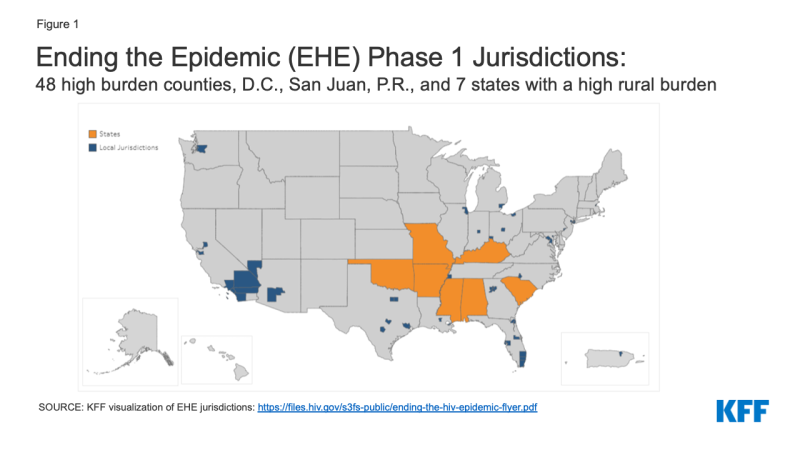 Phase II of the initiative is set to begin in 2026 during which EHE efforts will be more widely disseminated across the nation and Phase III will focus on providing care and treatment and intensive case management aimed at keeping the number of new HIV infections below 3,000 per year.

How is it Funded?

The commitment to “ending the HIV epidemic” has been accompanied by additional federal funding, including reprogrammed FY 2019 funding and new Congressional appropriations in FY 2020 and FY 2021. Funding in FY 2019 consisted of a small number of grants reprogramed from the Secretary’s Minority AIDS Initiative (MAI) fund, totaling $35 million, to launch the initiative. The first influx of new funding, through congressional appropriations, was provided in FY 2020, totaling $266 million. In FY 2021, funding is $403 million, an increase of $137 million.

These increases were provided to the Centers for Disease Control and Prevention (CDC) for HIV prevention and the Ryan White HIV/AIDS Program for HIV care and treatment.  Increased funding was also provided to community health centers, which may be used for both HIV care and prevention efforts. As with prior years, FY 2021 funding was also provided to National Institutes of Health (NIH)’s Office of AIDS Research (OAR). In FY 2021 the Indian Health Service (IHS) received its first EHE appropriation (it had received a small reprogramed allocation FY2019 but no EHE funding in FY 2020) (See table 1).

Agency funding is distributed via grants to the targeted jurisdictions, as well as to support related efforts. For additional detail, see our EHE funding tracker.

It is important to note that while EHE funding represents a significant increase for certain agencies, it still accounts for a relatively small share of total federal HIV funding provided to state and local jurisdictions. For a fuller accounting of such funding, see our state HIV funding tracker.

What are the EHE goals? What is the plan to meet them? And can they be met?

The goal of the EHE is to reduce new HIV infections by 75% in five years and by 90% in ten years. If successful, it is estimated that this would avert an estimated 250,000 new infections.

There are four “pillars” to the initiative that serve as a road map for achieving EHE goals:

The EHE goals are ambitious and the strategy to reach them is grounded in science, yet one model suggests that the goal of reducing new infections by 90% in ten years “is likely unachievable with the current intervention toolkit.” However, these researchers also note that while the goals may not be fully realized, HIV infections could be reduced by up to 67% with higher levels of engagement in care and increased PrEP uptake.

What is the process for determining local-level activities?

In Phase 1, the initiative focus is on areas where HIV transmission occurs most frequently or disproportionately. As such, HHS is working to provide these jurisdictions with “resources, expertise, and technology to develop and implement locally tailored EHE plans.” Locally-focused plans mean that jurisdictions can adjust their efforts to meet local cultural and epidemiological needs. For example, a jurisdiction hard hit by the opioid epidemic might make addressing this a central theme in their EHE plan, but such a focus might not be appropriate in all areas. However, because of the COVID-19 pandemic, the finalization of these plans was delayed.

How does the EHE fit within the larger policy environment?

The EHE initiative, while grounded in science and public health principles, does not take place in a vacuum. The Trump Administration backed a range of policies that limit health care access (e.g. work requirements in the Medicaid program, support for non-compliant health plans, efforts to repeal the ACA, etc.), remove protections for LGBT people and other minority groups (e.g. remove gender identity and sexual orientation protections from regulations implementing the ACA, implementation of the public charge rule, etc.), and could diminish EHE’s reach and success. The Biden Administration has opposed these policies and pledged to reverse them. While in some cases, executive actions mean these policies can be revered immediately, in others, reversing or rewriting policy can take several months or longer. In fact, President Biden issued an executive order on his first full week in office, aimed at strengthening the ACA, including by reviewing and potentially amending “policies or practices that may undermine protections for people with pre-existing conditions…” Additionally, on his first day in office, President Biden signed a separate executive order building on the Supreme Court’s Bostock v. Clayton County decision, directing federal agencies to include sexual orientation and gender identity in their definition of sex, as possible. These actions could broaden access to coverage, limit noncompliant plans, and renew and expand protections based on sexual orientation and gender identity in health care.

More broadly, our recent analysis explored a range of contextual and structural factors that could mitigate or facilitate EHE progress across the jurisdictions in four areas: policy and legal, socioeconomic, service availability, and overlapping. We find substantial regional differences that may ultimately indicate uneven EHE implementation and progress over time.

What is the relationship between the EHE, the National HIV/AIDS Strategy (NHAS), and the HIV National Strategic Plan?

The National HIV/AIDS Strategy (NHAS) was first introduced by the Obama Administration in 2010 marking the first time US government agencies came together to develop a coordinated approach to addressing the HIV epidemic. It was updated in 2015 and a again in 2020 in the final days of the Trump

Administration, this time rebranded as “The HIV National Strategic Plan”. Prior to his inauguration, on World AIDS Day 2020, then President-elect Biden stated he would “release a new comprehensive National Strategy on HIV/AIDS” but to date details have not been revealed.

The Strategic Plan explains, that “The HIV Plan and the Ending the HIV Epidemic: A Plan for America (EHE) initiative are closely aligned and complementary, with EHE serving as a leading component…The EHE initiative is beginning in the jurisdictions now hardest hit by the epidemic. The HIV Plan covers the entire country, has a broader focus across federal departments and agencies beyond HHS and all sectors of society…”.

There are substantial unknowns around whether the EHE goals can be met and how effective the initiative will be in the short and long term. It is also not clear whether or not the Biden administration will seek to make changes to this initiative but leadership has signaled it will continue. Some key questions include: