Federal funding for HIV has increased significantly over the course of the epidemic, rising from just a few hundred thousand in FY 1982 to more than $34.8 billion in FY 2019, for combined domestic and global efforts. This growth has been driven primarily by increased spending on mandatory domestic care and treatment programs (largely through Medicaid and Medicare), as more people are living with HIV in the United States, as well as by greater investments to combat HIV in low and middle-income countries. Still, federal funding for HIV represents just a small fraction (<1%) of the overall federal budget of the United States, and discretionary funding by Congress has been relatively flat in recent years. This fact sheet provides an overview of trends in federal funding for HIV and an update on current funding levels. Detailed data for FY 2013-FY 2019 are provided in Tables 1-2.1 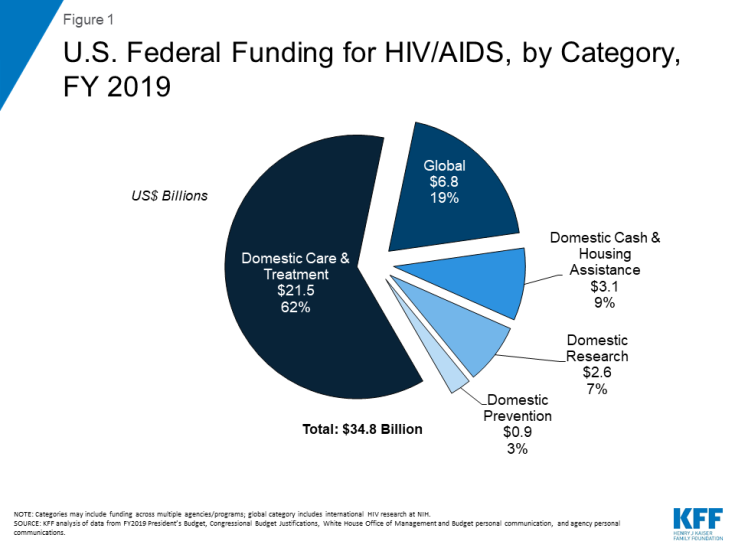 Federal funding is either mandatory or discretionary. Discretionary funding levels are determined by Congress each year through the appropriations process. Mandatory spending, primarily for entitlement programs (such as Medicaid and Medicare), is determined by eligibility rules and cost of services for those who are eligible, and is not dependent on annual Congressional appropriations (e.g., if more people are eligible and/or the cost of services goes up, mandatory spending will also increase). Mandatory spending for HIV accounts for $20.3 billion, or 58%, of the total HIV budget and includes estimated spending levels for: Medicaid, Medicare, Social Security Disability Insurance (SSDI), Supplemental Security Income (SSI), and the Federal Employees Health Benefits Plan (FEHB), programs which provide health coverage and cash assistance. Mandatory spending has accounted for an increasing share of federal funding for HIV, rising from 50% of total HIV funding in 2012 to 58% in the FY19), largely due to growth in Medicare and Medicaid spending.

The remaining $14.5 billion (42%) of the federal HIV budget for FY 2019 is discretionary, and is determined annually by Congress during the appropriations process. Discretionary HIV funding in FY19 is similar to the FY18 level ($14.4 billion). Of this, $7.8 billion (22% of the overall HIV budget and 53% of discretionary funding) is for domestic programs – prevention research, housing, and non-mandatory care programs (e.g., the Ryan White HIV/AIDS Program). The remainder, $6.8 billion (19% of the overall budget and 47% of the discretionary component), is for the global epidemic.

The largest component of the federal HIV budget is health care services and treatment for people living with HIV in the U.S., which totaled $21.5 billion in FY 2019 (62% of the total HIV budget and 77% of the domestic share). This represents a 5% increase over the FY 2018 level, primarily due to increased mandatory spending for Medicaid and Medicare.2 Medicare is the largest federal funder of HIV care and treatment, followed by Medicaid. The Ryan White HIV/AIDS Program, the largest HIV-specific discretionary grant program in the U.S. and third largest source of federal funding for HIV care (behind Medicaid and Medicare), is funded at $2.3 billion, the same as the FY18 level. Ryan White’s AIDS Drug Assistance Program (ADAP), which provides access to HIV-related medications to people with HIV, was flat funded at $900.3 million.

$3.1 billion of the FY 2019 budget for HIV is for cash and housing assistance in the U.S. (9% of the overall budget and 11% of the domestic budget), a slight increase over the FY 2018 level. This includes mandatory spending estimates for SSI and SSDI, which provide cash assistance to disabled individuals with HIV. Housing assistance, through the Housing Opportunities for Persons with AIDS Program (HOPWA), is discretionary and received $393 million in FY 2019, an $18 million (5%) increase over the FY 2018 level.

The smallest category of the federal HIV budget is domestic HIV prevention, which totaled $900.8 million in FY19 (about 3% of the overall HIV budget). This includes funding for domestic HIV prevention across multiple agencies, representing a small ($1.9 million) increase over the FY 2018 level. Most prevention funding is provided to the CDC’s National Center for HIV/AIDS, Viral Hepatitis, STD, and TB Prevention (NCHHSTP), which receives $788.7 million in FY 2019, the same as the FY 2018 level.

The Minority HIV/AIDS Initiative (MAI), which addresses the disproportionate impact of HIV/AIDS on racial and ethnic minorities in the U.S, was funded at about $54 million through the Office of the Secretary MAI Fund. Additional MAI funding is designated at other agencies within HHS (e.g. within SAMHSA, HRSA, CDC).

The U.S. government first provided funding to address the global HIV epidemic in 1986. Total funding (bilateral and multilateral) has increased significantly over time, particularly since the launch of the President’s Emergency Plan for AIDS Relief (PEPFAR) in 2003.4 However, since 2010, funding for PEPFAR has remained essentially flat. All U.S. funding for global HIV is considered to be part of PEPFAR, including both bilateral HIV efforts as well as contributions to multilateral organizations.

The FY 2019 budget for HIV includes $6.8 billion for the global epidemic – $5.4 billion for bilateral programs and $1.35 billion for the U.S. contribution to the Global Fund to Fight AIDS, Tuberculosis and Malaria (Global Fund). Congress provided a slight increase in funding for global HIV activities in FY 2019 (approximately $75 million above the FY 2018 level) compared to the FY 2018 level. Global HIV funding amounts to 19% of the overall FY 2019 HIV budget amount and 47% of discretionary funding.