ADAPs began serving clients in 1987, when Congress first appropriated funds to help states purchase the only approved antiretroviral (ARV) drug at that time, AZT.4  In 1990, they were incorporated into the newly enacted Ryan White Comprehensive AIDS Resources Emergency (CARE) Act, now known as the Ryan White Program.5,6 Since Fiscal Year (FY) 1996, Congress has specifically earmarked funding for ADAPs through Part B of Ryan White, which is allocated by formula to states.7 Ryan White has been reauthorized by Congress four times since first created and changes have been made to ADAPs over time. While the current authorization has lapsed, there is no sunset provision in the law. Therefore, ADAP, and the Ryan White Program more broadly, can continue to be funded through annual Congressional appropriations.

All states, Washington, D.C., and other U.S. territories receive federal ADAP earmark funding through Part B of Ryan White. In addition to the ADAP earmark, ADAPs receive state funding and contributions from additional sources, including other parts of Ryan White, but this support is highly variable and largely dependent on local decisions and resources. ADAPs are not entitlement programs – annual federal appropriations and, where available, other funding, determine how many clients ADAPs can serve and the level of services they can provide. Each state operates its own ADAP, including determining eligibility criteria and other program elements, such as formularies, resulting in significant variation across the country.

ADAP funding and budget composition is highly variable from year to year, and influenced by a broad range of factors. In recent years, the budget has also included transfers from other parts of Ryan White, as well as emergency funding to help alleviate ADAP waiting lists and unmet program needs. 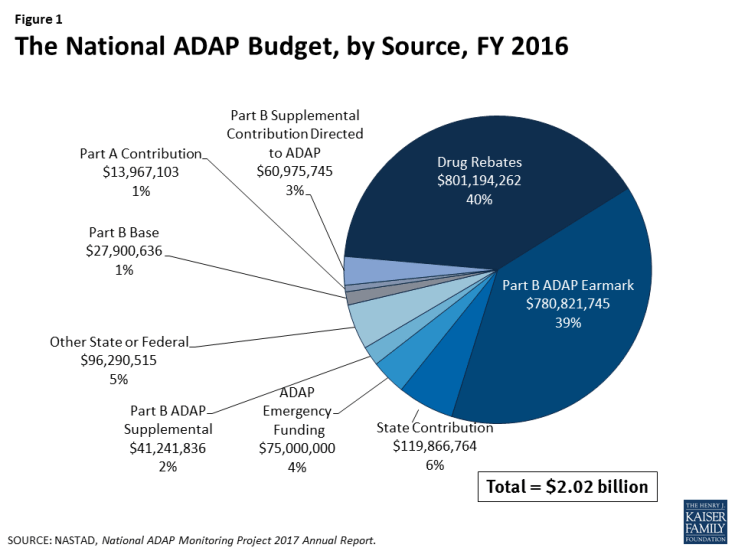 ADAP formularies (the list of drugs covered) vary significantly across the country. In 2016:

The Ryan White Program requires all ADAP clients to be HIV-positive, low-income, and under- or uninsured, but no income level is specified under current law. Each ADAP determines its own eligibility criteria. As of January 1, 2015:

ADAP client enrollment and utilization have grown over time and are now at their highest levels to date. Client demographics vary by state and region, but nationally have remained fairly constant over time. 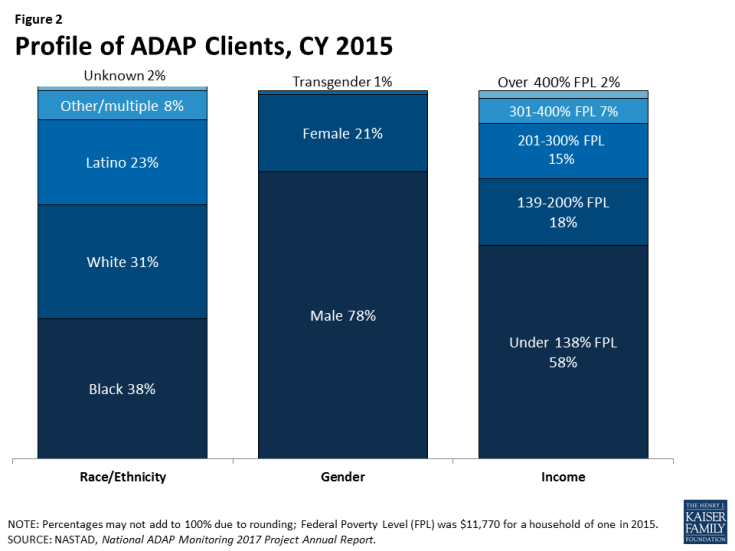 ADAPs must balance client demand with available resources on an ongoing basis. Because of recent economic conditions, instituting cost-containment measures or management practices is common. In the past, waitlists were used as a primary cost-containment measure. Waitlists peaked in September 2011 when 9,298 individuals in 11 states were eligible for ADAPs yet unable to access medications. Currently, waitlists have been eliminated as a result of an influx of reprogrammed Ryan White funding and separate emergency funding between 2010 and 2013. In some cases, ADAPs received higher rebates from drug companies and individual ADAPs implemented stricter cost-containment measures such as capped enrollment and reduced eligibility and formularies. Few states currently have cost-containment measures (e.g., enrollment caps and waiting lists) in place, although as they were more common in the past when ADAPs faced budget crises, their use will be important to monitor their use moving forward.

All ADAPs participate in the 340B program, enabling them to purchase drugs at or below the statutorily defined 340B ceiling price. ADAPs conduct drug purchasing through different mechanisms:

Clients have gained access to new coverage opportunities under the Affordable Care Act (ACA). In adjusting to the new health coverage landscape and in complying with Ryan White’s payer of last resort requirement, ADAPs have intensified their efforts to coordinate with other health coverage entities, including private insurance marketplaces and Medicaid.14 In many cases, providing insurance assistance is more cost effective for ADAPs (the average per capita cost of a client enrolled in insurance coverage is about one third of that of clients enrolled in direct drug programs) and doing so provides clients with robust coverage. ADAPs assisted with insurance coverage for 124,099 clients in 2015, at a cost of $310 million.

The Medicare Prescription Drug, Improvement, and Modernization Act of 2003 (MMA) added an outpatient prescription drug benefit, Part D, to the Medicare program.  As the payer of last resort, ADAPs must ensure that any Medicare Part D-eligible client is enrolled in Part D and that ADAP is not paying directly for prescription drug expenses. However, ADAPs can help with clients’ out-of-pocket costs associated with Part D coverage. In CY2015, 13% of clients were served by Part D.

Under the ACA, as of January 1, 2011, payments made by ADAPs on behalf of a Medicare Part D beneficiary count toward “TrOOP” (a beneficiary’s true out-of-pocket costs), allowing the client to pass through the “doughnut hole” (or, coverage gap) into catastrophic coverage.15

ADAPs continue to play a critical role in providing prescription drugs and a pathway to insurance coverage for low- and moderate-income people with HIV who would otherwise have limited access. In addition, ADAPs often serve as a bridge to other care and support services. As the number of people living with HIV has increased in the U.S., so too has the need for ADAPs.  While ADAPs have faced challenging national and state fiscal conditions in the past, leading to the creation of waiting lists, emergency funding, increased rebates from manufacturers, and the implementation of the ACA have relieved much of this pressure. Looking ahead, as lawmakers continue to debate the future of the ACA, as well as federal spending more generally, it will be important to monitor the impacts of any policy changes on ADAPs and the clients they serve.