What’s the Political Power of Those Newly Insured Under Obamacare?

This was published as a Wall Street Journal Think Tank column on December 3, 2015. 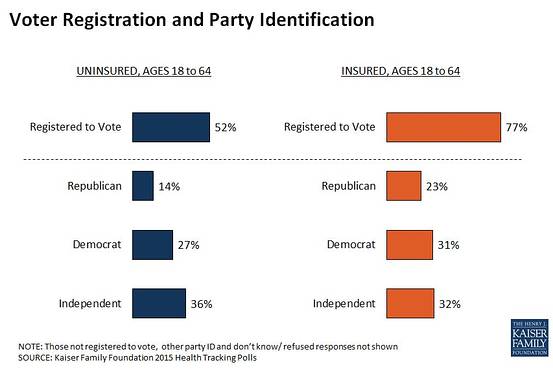 Kaiser Family Foundation data on voter registration and party identification among the uninsured and newly insured.

An estimated 17 million uninsured have been covered by the Affordable Care Act. As that number grows in the coming years, it could have political implications: How will the newly insured behave at the ballot box? Will they vote? Will they become a Democratic constituency? The ACA may be an issue in the 2016 elections, but the newly insured are unlikely to become an important electoral factor themselves.

One potential indicator of future behavior is how the newly insured behaved politically when they didn’t have health coverage. As the chart above shows, in 2015 slightly more than half of the uninsured (52%) reported that they were registered to vote; among those with insurance coverage, more than three-quarters, or 77%, were registered. We have known for a long time that the uninsured are among the least likely to vote. Perhaps more surprising, while the uninsured shade Democratic as a group, they are a reasonably heterogeneous. Twenty-seven percent of the uninsured report that they are Democrats, 13% Republicans, and 36% call themselves independents. The largest share of uninsured independents describe themselves as not leaning Republican or Democratic. These uninsured independents are the most likely to be disengaged from the political process.

We also know that the uninsured are slightly less favorable toward the ACA than is the public overall. This may seem counterintuitive, as the uninsured benefit most from the ACA. But there are several reasons: By definition the uninsured have not yet been helped; they generally believe that coverage will not be affordable because it never has been before; they may not know that they can get help paying for it under the ACA; and they face a penalty if they do not purchase coverage.

Surveys have found that most of the previously uninsured like their coverage–a Kaiser Family Foundation poll found that 76% do–but it’s not known whether appreciation for that coverage will be a factor when they vote or if they will vote in significant numbers. It is a fair bet that in the short term the newly insured will behave politically much like the uninsured have: Many will not vote, and they will continue to represent a very small slice of the electorate.

Since the days of Republican opposition to Lyndon Johnson‘s Great Society programs–and even before that–many in the GOP have opposed Democratic social programs on policy grounds and because they perceived them as mobilizing liberal advocacy efforts and potentially strengthening Democratic governors, mayors, and other elected officials who could use the support to build larger constituencies. ACA health coverage is different; it’s a direct entitlement to qualified individuals. Unlike those earlier programs, the ACA’s coverage expansion would not seem to present a similar political threat for Republicans or a political tool for Democrats. Over the longer term, however, people with ACA coverage may come to see Democrats as better protectors of their coverage than Republicans, much as seniors do of Medicare coverage, although that has not always translated into support for Democrats at the ballot box.

There is overwhelming evidence that coverage matters to health access and economic security for people who are newly insured. But neither the newly insured or the remaining uninsured are likely to play a significant role at the ballot box anytime soon.