This was published as a Wall Street Journal Think Tank column on November 24, 2105. 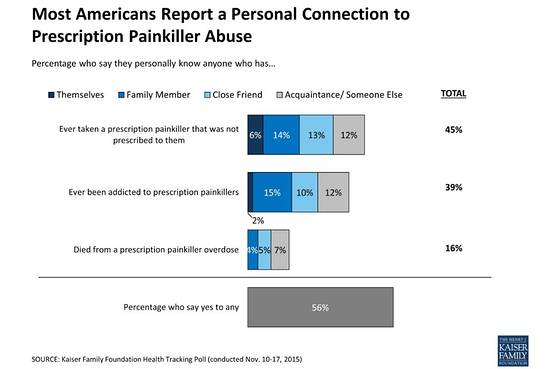 Kaiser Family Foundation November 2015 tracking polling results of share of Americans who report a personal connection to painkiller abuse and addiction or know someone who has such an addiction.

Discussion of health care in this country has been dominated by Obamacare since debate about the law began in earnest before its passage in 2010. Now other issues such as rising drug prices and deductibles are edging onto the agenda. This was apparent last week when United Health Care said it would consider pulling out of the insurance marketplaces and a Department of Health and Human Services forum on drug prices also made headlines. A third issue may be joining the others as a top-tier health topic at the state and federal levels: the problem of painkiller and heroin abuse and addiction. Governors and candidates are paying more and more attention to this growing health problem.

One reason this problem is gaining political traction is that it affects a broad cross-section of society. By a significant margin (63%), whites are more likely to report a personal connection to the problem than blacks (44%) or Hispanics (37%).

This is a very different kind of issue than the ACA or rising drug prices and deductibles. It is far less partisan and both more personal and relatable for the public than the intricacies of the Affordable Care Act. Painkiller abuse and other drug abuse and addiction are also problems that can be addressed at the state and local levels, unlike covering the uninsured or controlling rising drug prices.

Our poll found that, across all 50 states, reducing painkiller and heroin abuse ranked in the middle of the public’s priorities for their governors and legislatures. Several governors have declared painkiller and heroin abuse a crisis in their states, and a poll in New Hampshire published last month found it to be the Granite State’s top priority, even ahead of the economy and education.

Painkiller abuse and addiction are rising issues in a health agenda that is now somewhat less dominated by the Affordable Care Act. As the national discussion of health care becomes more multifaceted, will elected officials have the bandwidth to take on yet another big health problem? Many governors seem to feel that they have no choice.