This was published as a Wall Street Journal Think Tank column on April 21, 2015. 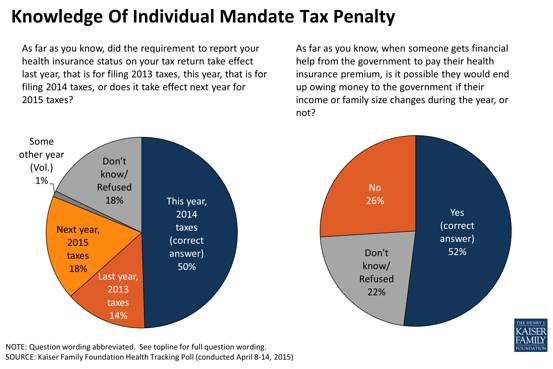 Tax season has come and gone with no great outbreak of protest about the Affordable Care Act’s least popular provision: the individual mandate.

This central element of the ACA was included to help ensure that the individual insurance market would have balanced pools of healthier people and sicker people to help spread insurance risk and keep premiums reasonable. While most of the individual provisions of the ACA are popular, the mandate has always been decidedly unpopular: It is disliked by 65% of the public, according to the Kaiser Family Foundation’s December Health Policy Tracking Poll. No one really knew how Americans would react to a requirement that people buy insurance or pay a fine to help create more viable insurance pools. Most Americans don’t spend a lot of time thinking about insurance pooling, and there would be winners and losers as risk was spread.

The Treasury Department estimated that 2% to 4% of taxpayers, representing 3 million to 6 million returns, would pay the penalty on their returns this year for not enrolling last year. An estimated 4.5 million to 7.5 million taxpayers would need to reconcile subsidies they received for coverage when they did their taxes. A Kaiser Family Foundation analysis forecast that half of those people would be required to make repayments because they underestimated their income when they enrolled for coverage and 45% would receive refunds because they overestimated their income. Treasury estimates found that 20% of tax filers, or about 30 million, would be exempt from the mandate altogether for reasons such as their incomes are too low. The one-two punch of the mandate and repayments at tax time might have produced a public backlash–but it has not.

One reason may be that the public was prepared–that between news media coverage of these issues and government officials and organizations involved in enrollment outreach talking about them often enough that paying the penalty or making a repayment was not “news” when tax season arrived. The government also offered a special extended enrollment period to people who were facing the penalty but didn’t know about it and were still uninsured. Even though a very modest number of people took advantage of it this, it may also have helped to diffuse the issue.

The initial penalty for not having coverage is also relatively modest this year: $95 per adult or 1% of adjusted family income, whichever is greater. Kaiser’s analysis found that the average repayment for those who had to make one is about $800. That’s enough to sting for many people, but people required to make a repayment had to only because they made more money than they had estimated at enrollment.

The muted reaction to the mandate also parallels almost exactly the reaction to a similar mandate in Massachusetts. Bay State residents accepted the mandate and did not protest or relocate en masse to New Hampshire or Rhode Island. While there is a tendency to write off Massachusetts–my home state–as particularly liberal, places such as Lowell, Brockton, Worcester and North Adams are not Harvard Square, nor are they all that different from much of the rest of the country.

The reaction thus far may not be the last word on the mandate, which remains unpopular. And the penalty for not buying insurance is set to increase to $695 per adult or 2.5% of adjusted income by 2016.

All in all, however, the individual mandate and tax reconciliation for insurance subsidies passed their first major hurdles this tax season with no significant public backlash.