This was published as a Wall Street Journal Think Tank column on March 31, 2015. 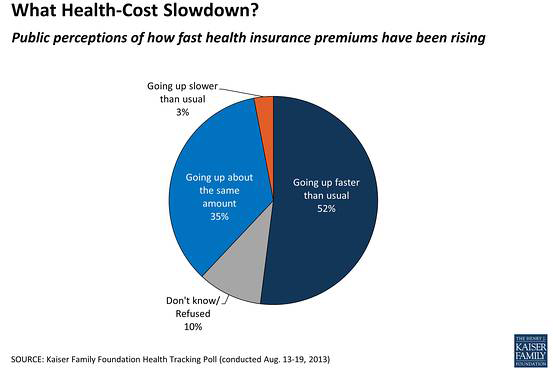 National spending on health care and insurance premiums has risen at historically low rates in recent years. But, as the chart above shows, even when spending and premiums experienced record-low growth in 2013, only 3% of Americans said health costs had been rising slower than usual, and 52% said they had been growing faster than usual. The American people are not out to lunch; their view of the problem of health costs is very different from that of experts.

The amount that people with employer-based insurance pay for premiums has risen 212% in the last 15 years, while wages have risen 54% and inflation 43%. Deductibles and other forms of cost sharing have also risen steadily, so much so that about a quarter of privately insured Americans don’t have the savings to pay their deductibles. Drug prices have been rising sharply. Even though drugs represent just 10% of overall health spending, people experience the co-pay cost every time they go to a pharmacy or order online. With premiums, deductibles, and drug costs rising at a time when wages have been relatively flat, it’s no wonder Americans haven’t felt relief from the slowdown in health-cost growth, even if their premiums have been rising more slowly than in the past.

Experts (myself included) often focus on cost measures such as health spending as a percentage of GDP and the rate of increase in health spending. These measures are important because what we spend on health affects our ability to address other national priorities. In more than 20 years of regular polling on health-care issues by the Kaiser Family Foundation, I have found that Americans with coverage care about:

Two other things stand out:

Seniors care a lot about Medicare and sometimes vote on the issue.

And Americans overall don’t care as much as experts do about improving quality and eliminating unnecessary care. In general, people think that quality is good and they want more care not less.

Of course, the top priority for people who do not have insurance should be to get affordable coverage. The Affordable Care Act still has legal and political minefields to traverse before its coverage expansions are fully implemented. But health-care spending is beginning to tick up again, and as 2016 approaches many politicians will be looking for a health-care agenda to campaign on that moves beyond the ongoing warfare over the ACA.

As these forces converge, health-care issues may refocus, with more emphasis on costs and the affordability of coverage than expanding coverage, and on consumer protection and consumer information.