This was published as a Wall Street Journal Think Tank column on April 16, 2015. 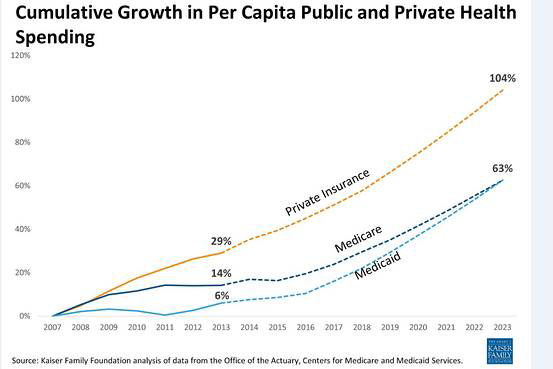 No single fact can settle the long-running debate of whether public or private health insurance is preferable. But by one basic metric, the rate of increase in per capita spending, public insurance has an edge.

The Federal Office of the Actuary in the Centers for Medicare and Medicaid Services has charted the annual rate of increase in spending for Medicare, Medicaid, and private health insurance. As the chart above shows, by cumulative growth in per capita spending, Medicare and Medicaid have generally grown more slowly than private insurance and are projected to continue doing so through 2023. Per capita spending is an especially useful measure for comparing public and private health insurance spending because it shows how much Medicare, Medicaid, and private insurers spend on each person irrespective of the number of people covered.

Advocates of public coverage tend to like its relative simplicity, uniform guaranteed benefits, and lower overhead costs, as well as the ability of large public insurance programs to use their purchasing power to leverage changes in the health-care system. Advocates of private coverage favor the greater choice it can offer consumers and the competition that can foster in the marketplace. For some people, preferences for public or private coverage are largely ideological.

When it comes to analyzing health spending, there are always multiple factors at play. Sometimes changing demographics can have a role. As younger baby boomers join Medicare, the average amount that the program spends per beneficiary will be slightly reduced over the next decade. Overall, however, it appears that public programs control per capita spending somewhat more effectively than private coverage does. That may be just the opposite of what many would presume in a country where the private market is generally expected to outperform the public sector.

Here’s another way to think about it: While Medicare and Medicaid are far from perfect, the purchasing power and policy levers available to large public programs appear to give them an edge over our fragmented private insurance system when it comes to controlling spending.