On March 6, 2017, House Republicans announced their plan to replace the Affordable Care Act (ACA) – the American Health Care Act (AHCA). While Americans are still learning about the details of this plan, the latest Kaiser Health Tracking Poll (which was in the field before the Congressional Budget Office released its analysis of the plan) examines the public’s first impressions of its likely effects on the number of uninsured, those who buy insurance on their own, and those with pre-existing conditions.

About half (48 percent) the public thinks the Republican replacement plan will decrease the number of people who have health insurance, while one in five (18 percent) say the number of insured people will increase and three in ten say it will stay about the same. Notably, the public is confused about the effect the current health care law has had on coverage rates in the U.S.; while four in ten (41 percent) know that the share of people who are uninsured has decreased since the ACA was passed, nearly as many (31 percent) believe it has increased and 26 percent think it has remained about the same.

When it comes to costs, about half (48 percent) expect the new plan to increase costs for people who buy insurance on their own, while about a quarter each say costs for these people will decrease (23 percent) or stay about the same (25 percent). Similarly, four in ten (41 percent) expect the replacement plan to provide health insurance with higher deductibles, while a quarter each think deductibles will decrease (25 percent) or stay the same (23 percent). When it comes to protections for people with pre-existing conditions, nearly half the public (45 percent) expects the replacement plan would provide similar protections to the current law, but about twice as many say the plan would offer fewer protections as say it would offer more (32 percent versus 15 percent). 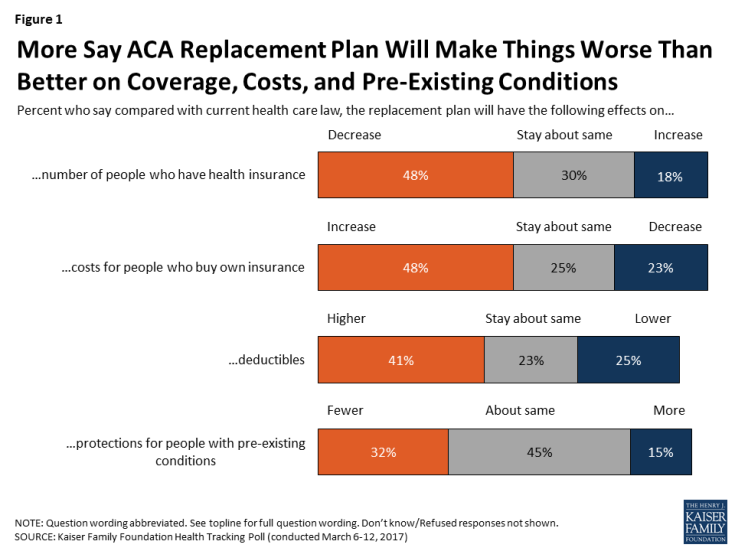 Not surprisingly, partisans hold very different views of how the replacement plan would impact coverage and costs. While majorities of Democrats believe the plan will decrease the number of people with insurance and increase costs, Republicans’ views are more mixed. Nearly half of Republicans (46 percent) think the plan will decrease costs for people who buy their own insurance, four in ten (41 percent) think it will provide insurance with lower deductibles, and one-third (34 percent) think it will increase the number of people with health insurance.

Expected Changes in Costs for Different Groups Under Replacement Plan

A Kaiser Family Foundation analysis has shown that the tax credit structure under the replacement plan would generally increase costs for certain groups of people buying insurance in the non-group market and decrease costs for others. For example, compared with current law, lower-income individuals, older adults, and those living in rural areas would pay more for insurance on average under the replacement plan, while younger adults, those with higher incomes, and those living in urban areas would pay less.1

However, the public does not see a distinction in how the replacement plan would impact costs for these different groups of individuals, except when it comes to income. About four in ten Americans expect costs to increase for younger, older, urban-dwelling, and rural-dwelling people buying insurance on the individual market, while between about two in ten and one quarter expect them to decrease. Similarly, almost half (46 percent) think costs would increase for lower-income people buying their own insurance, while one quarter think they would decrease. Views are more divided on how higher-income people buying their own insurance would be affected, with over four in ten (45 percent) saying their costs would be about the same, and about a quarter each saying they would increase (25 percent) or decrease (27 percent). 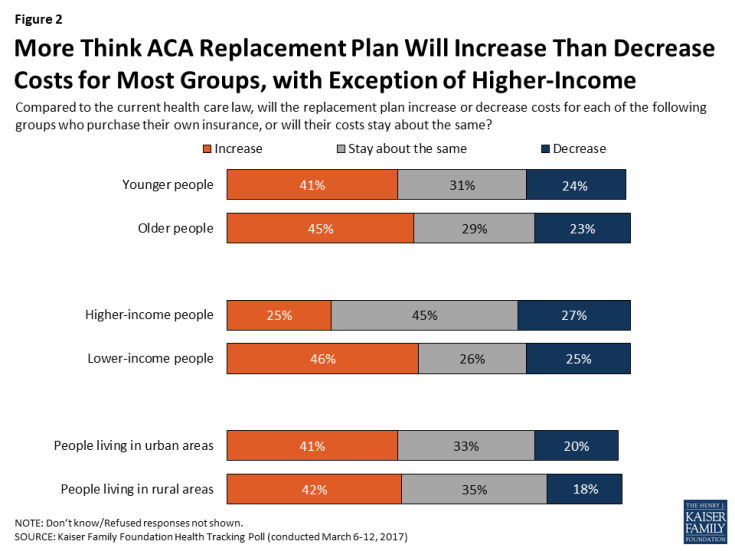 Figure 2: More Think ACA Replacement Plan Will Increase Than Decrease Costs for Most Groups, with Exception of Higher-Income

Public Opinion on the ACA

These views of the replacement plan are set against a backdrop of a public that continues to be divided in its view of the ACA. After shifting in a more favorable direction last month, public opinion on the current health care law mostly holds steady this month, with 49 percent having a favorable view and 44 percent unfavorable. Partisanship continues to underlie these views, with 77 percent of Republicans expressing an unfavorable view, 73 percent of Democrats expressing a favorable one, and independents evenly divided (46 percent favorable, 47 percent unfavorable). 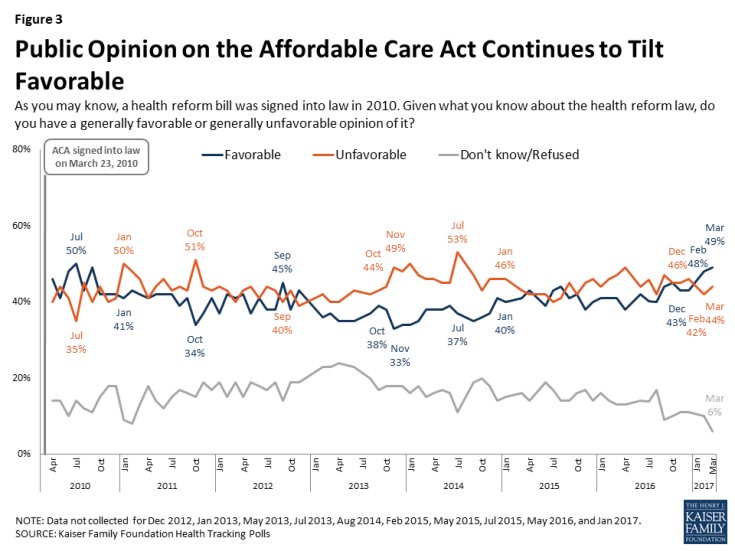 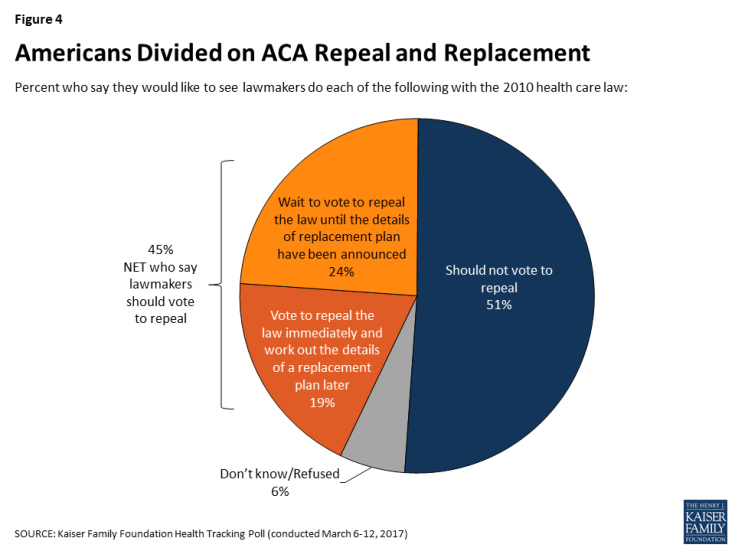 Again, these views are largely driven by party identification, with the vast majority of Republicans (81 percent) saying Congress should vote to repeal the law and a similar share of Democrats (78 percent) saying they do not want the law repealed. Republicans are about evenly divided between those who want Congress to wait to vote on repeal until the details of a replacement plan have been worked out (41 percent) and those who say they should vote to repeal the ACA immediately and work out the details of a replacement plan later (36 percent).

The House replacement bill includes a provision that would block Planned Parenthood for one year from receiving federal funds to provide services to low-income people on Medicaid, including non-abortion services like contraception, testing and treatment for sexually transmitted infections, and cancer screenings. Seventy-five percent of the public thinks Medicaid should continue to pay Planned Parenthood for non-abortion services, while 22 percent think all federal payments to the organization should be stopped. 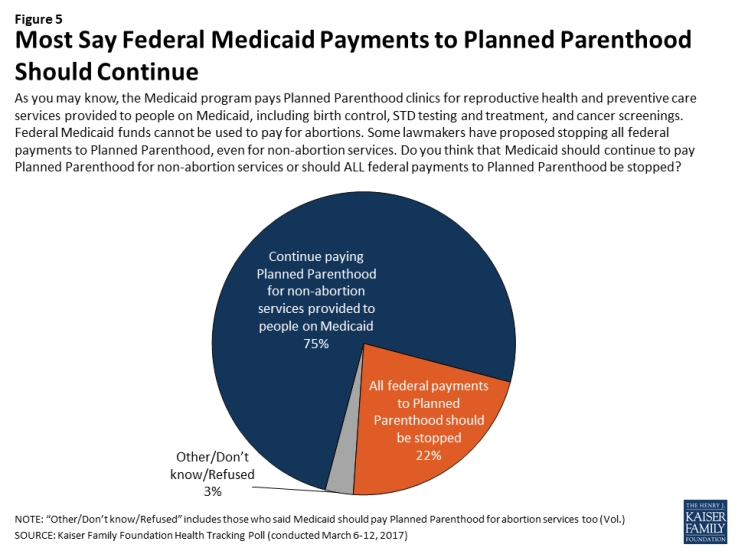 While there are partisan and gender differences on this question, majorities across groups, including just over half of Republican men (55 percent) and Republican women (57 percent) say that the federal government should continue to pay Planned Parenthood for non-abortion services received by people on Medicaid. 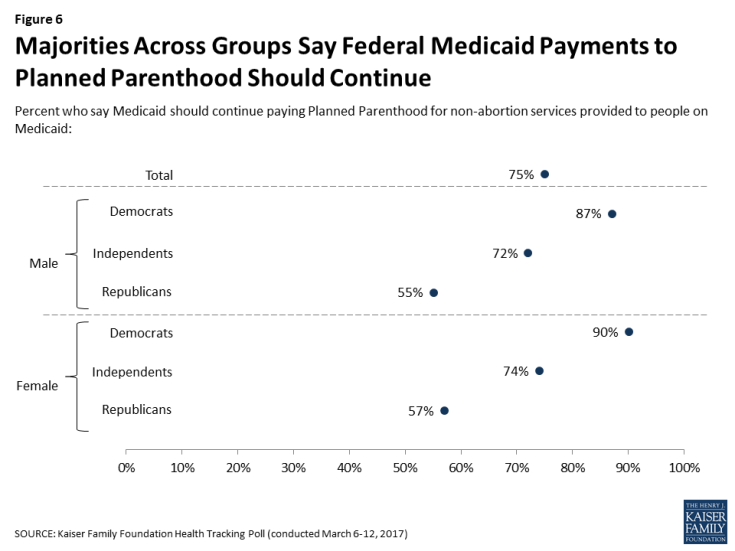 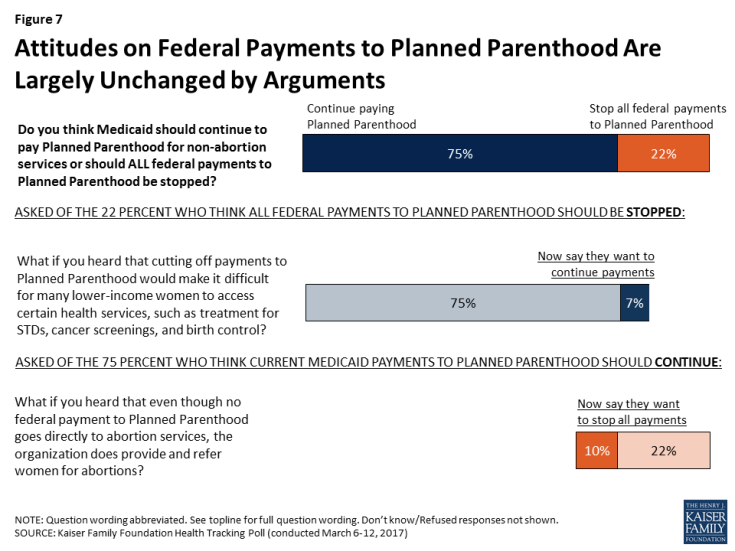 Figure 7: Attitudes on Federal Payments to Planned Parenthood Are Largely Unchanged by Arguments

When asked about services currently provided by Planned Parenthood, most are aware of the variety of health care services provided by the organization including contraception (87 percent), treatment and testing for sexually transmitted infections (80 percent), cancer screenings (68 percent), and abortions (68 percent). Similar shares of women and men are aware that Planned Parenthood provides each of these services. 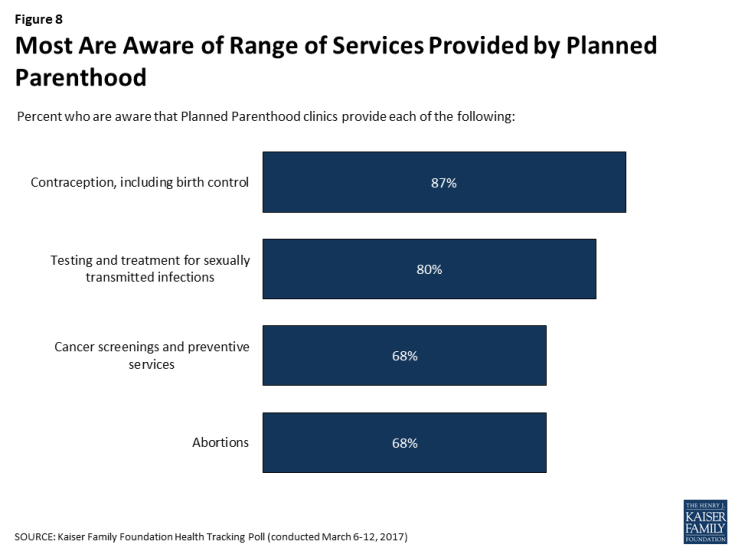 Figure 8: Most Are Aware of Range of Services Provided by Planned Parenthood

Awareness is lower when it comes to the question of whether federal funds can be used to pay for abortion services. While the Hyde Amendment currently prohibits federal Medicaid funds from being used to pay for abortions, just one-third (33 percent) of the public is aware of this ban, while almost half (45 percent) say there is not a ban and one in five (21 percent) say they don’t know.

Republicans are less likely than Democrats to be aware that there is a ban on federal funds being used to pay for abortions. One-quarter of Republican women (25 percent) and Republican men (26 percent) are aware of the ban, compared with about four in ten women and about a third of men who identify as Democrats and independents. 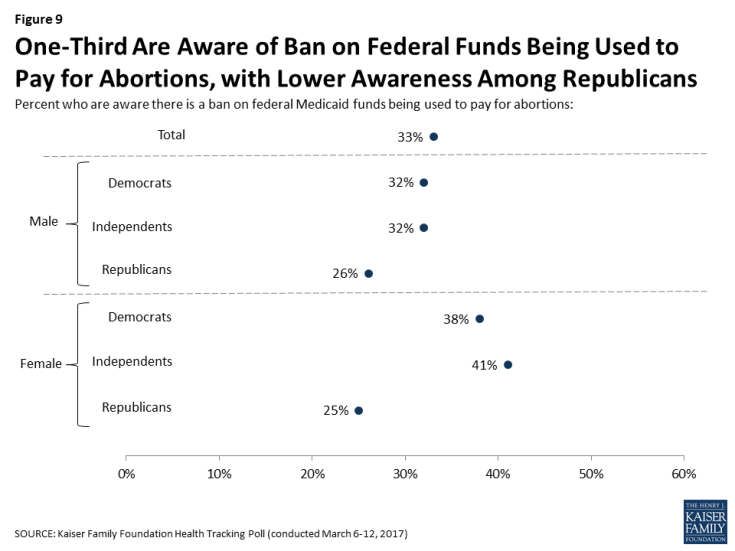 Figure 9: One-Third Are Aware of Ban on Federal Funds Being Used to Pay for Abortions, with Lower Awareness Among Republicans

Beyond the question of federal funding for Planned Parenthood, more generally, a majority of the public says it is important that the federal government provides funding for reproductive health services including family planning and birth control for lower-income women. While a large majority of Democrats (84 percent) and over half of independents (56 percent) say this is “very” important, the share is much smaller among Republicans (36 percent). 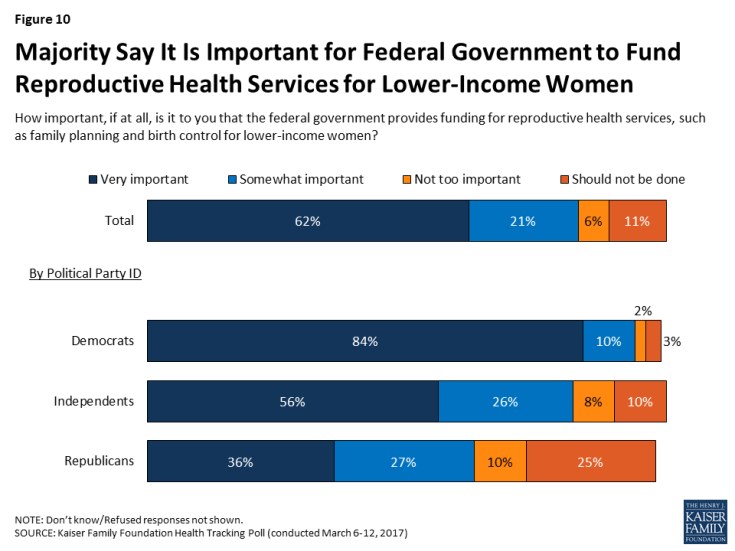 Large majorities of the public also say it is important (either “very” or “somewhat”) for several of the ACA’s requirements affecting women and children to be kept in place in any replacement plan. Roughly eight in ten say that if lawmakers decide to repeal and replace the 2010 health care law, it is “very” important that insurance companies cannot deny coverage to pregnant women (85 percent), that all private health plans must cover the full cost of preventive care with no cost-sharing for women (81 percent) and children (80 percent), and that insurance companies cannot charge women more than men for the same policy (79 percent). Fewer – 54 percent –  say it is very important to keep in place the requirement for health plans to provide birth control with no cost-sharing, but three-quarters (78 percent) say this is at least “somewhat” important. 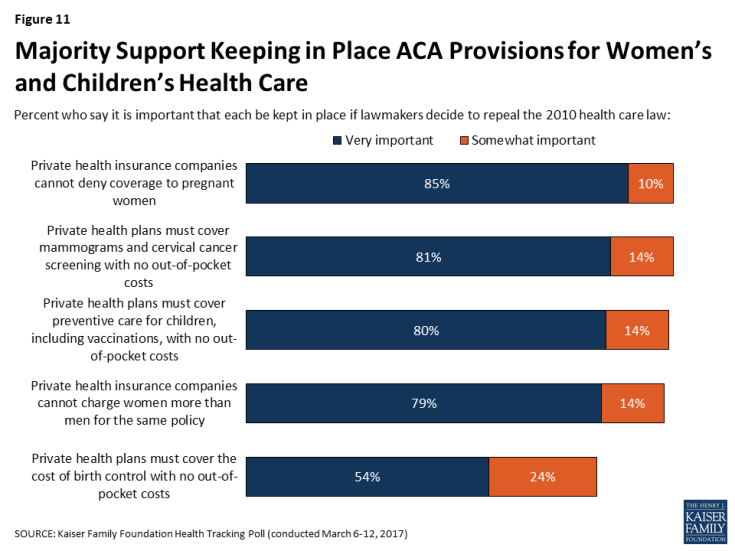 A large majority of the public (89 percent) also supports the ACA’s requirement that all private health plans must include coverage for maternity care,  including 86 percent of Republicans and 94 percent of Democrats. 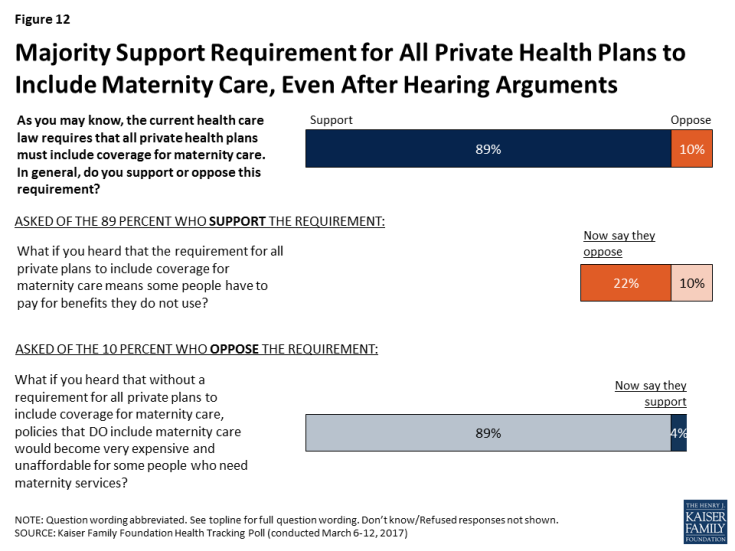 Figure 12: Majority Support Requirement for All Private Health Plans to Include Maternity Care, Even After Hearing Arguments

President Trump and Republican leaders in Congress have supported the idea of allowing insurers to sell their plans across state lines as a way to drive down insurance costs, though this provision is not included in the current House repeal and replace legislation.2 Overall, nearly two-thirds of Americans (64 percent) generally favor this proposal while three in ten (28 percent) oppose it. These attitudes are fairly malleable with both those who favor and oppose this policy being persuaded after hearing counter-messages.

Among the 28 percent who originally oppose this policy, four in ten (12 percent of the public overall) change their opinion after hearing that allowing the sale of insurance across state lines could encourage competition and decrease costs for consumers, increasing the total share who favor the policy to 76 percent.

On the other side, among the 64 percent who originally said they favor the policy, about half (30 percent of the public overall) change their opinion after hearing the argument that allowing the sale of insurance across state lines could encourage insurers to operate from states with fewer consumer protections and make it harder for people to get help if they have a problem with their plans, increasing the total share who oppose selling insurance across state lines to 57 percent. 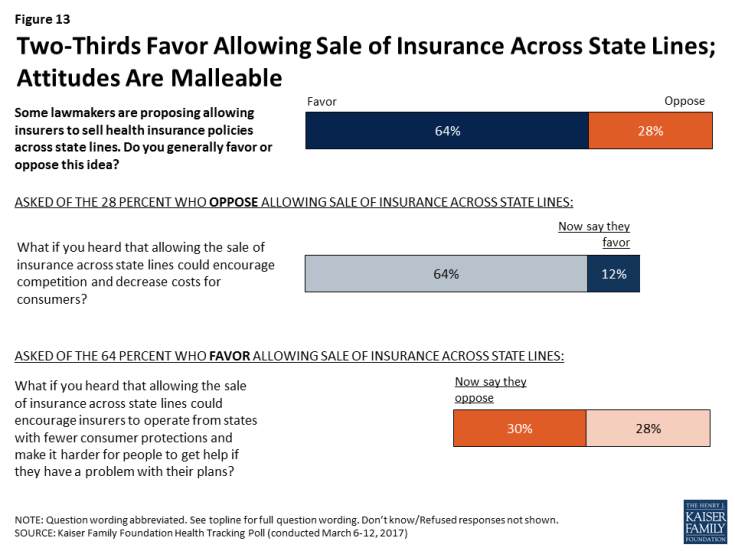 As the focus of debate moves away from the ACA itself and on to potential replacement plans, the public’s awareness of what the 2010 health care law actually does is somewhat uneven. While large majorities are aware of many of the ACA’s key provisions, others are less well-known. A large majority of the public is aware that the ACA allows young adults to stay on their parents’ insurance until age 26 (83 percent) and that it requires nearly all Americans to have health insurance or pay a fine (82 percent). Between six and seven in ten are aware the law requires insurance plans purchased by individuals to include a minimum package of benefits (71 percent), that it provides financial help to low-and moderate-income Americans who do not get coverage through an employer (69 percent), that it gives states the option of expanding Medicaid (65 percent), that it prohibits insurers from denying coverage to those with pre-existing conditions (60 percent), and that it requires health insurance plans to cover the cost of children’s preventive services, including immunizations, with no cost-sharing (59 percent).

Smaller shares – about half the public – know that the law eliminates out-of-pocket costs for preventive health care services (53 percent) and birth control (47 percent). Fewer still – 42 percent – are aware that the law prohibits insurance companies from charging women more than men. 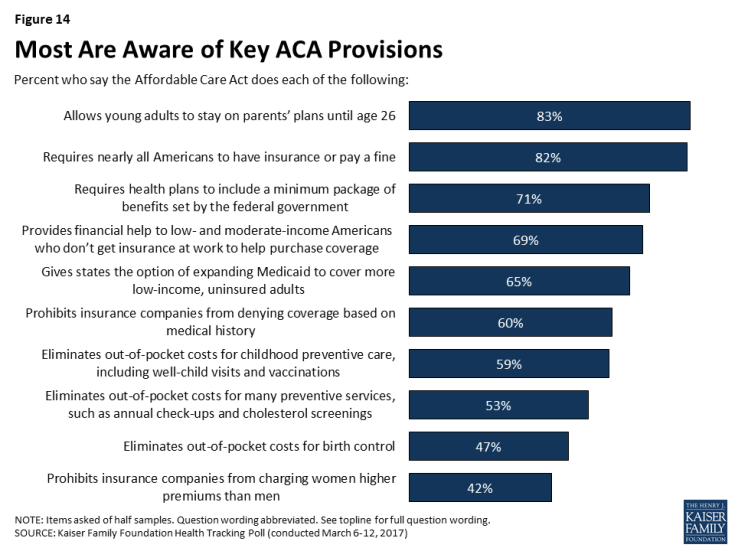 Figure 14: Most Are Aware of Key ACA Provisions

At the same time, misconceptions about the law remain. Half (50 percent) incorrectly believe the ACA allows undocumented immigrants to receive financial help from the government to buy health insurance, and four in ten (40 percent) mistakenly think it cuts benefits for people in the traditional Medicare program.