Pulling It Together: Are We Headed for a Government Takeover of Health Care?

Remember the “government takeover of the health care system” argument that critics of the health reform law have used?  Well, last week the Office of the Actuary in the Centers for Medicare and Medicaid Services published the latest projections of health spending in the journal Health Affairs.  Attention focused mainly on the Actuary’s estimate that national health spending would grow to almost 20% of GDP by 2020 and that the Affordable Care Act (ACA) would have a negligible impact on the rate of growth in health spending.  The Actuary said that the ACA will largely pay for itself, producing savings in health care spending that will offset the additional costs as the uninsured gain coverage, have better access to care, and have lower out-of-pocket costs.

What got almost no attention, however, were some other numbers in the report.  They show the percentage of our national health care bill paid for by government growing from 45% in 2010 to a projected 49% in 2020.  In other words, government’s share of national health spending, while unquestionably large, is not growing much at all, and even in ten years it will be less than half of our country’s total health spending.  Measured by the government’s share of health care spending, there is no sign of a government takeover of the health care system.

Put another way, when you follow the dollars, there is no more evidence of a government takeover than there is of a private sector one. 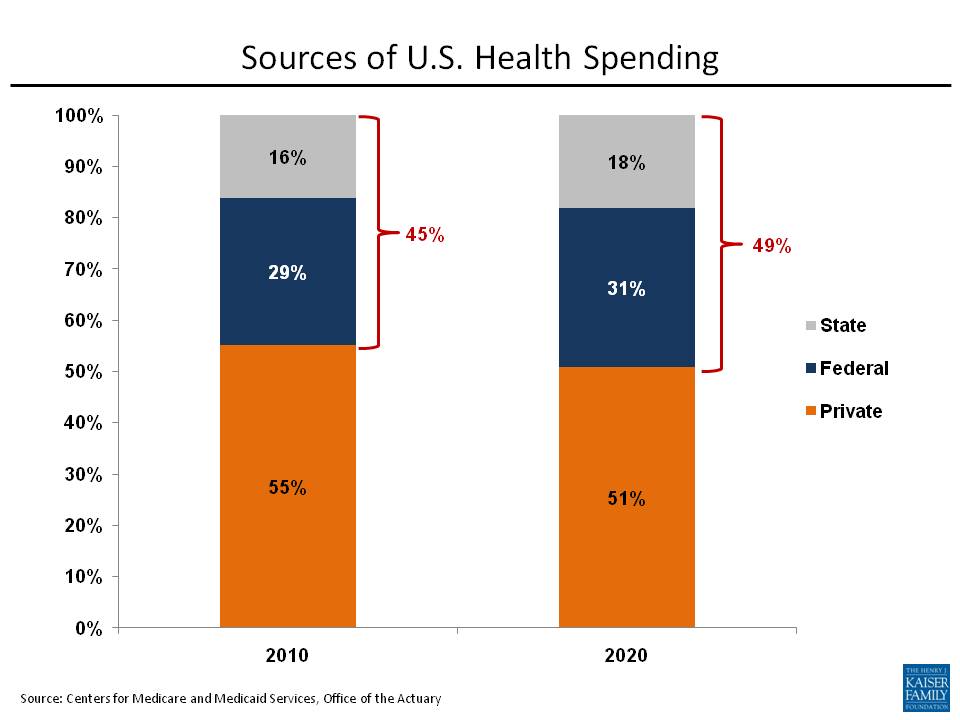 Now, of course, there are other ways to characterize a “government takeover.” Those who see government’s role in health care as expanding would certainly point to what they see as a growing body of government regulations they believe suffocates competition and innovation. There is another side to their view, of course.  One critic’s stifling regulation is another advocate’s vitally needed consumer protection.  It is also true that government health spending is more concentrated than private health spending, primarily in two big public programs, Medicare and Medicaid.  Some see this as a plus, because big public programs can exercise greater bargaining power to hold down costs. Others see it as a minus, believing that their concentrated power inhibits private sector competition.  And, of course, conservatives would say that government’s role in health care is too big at 45% of health spending, even if that does not constitute a “takeover.”But one thing we in the health policy field all know is that “money talks,” and while it is by no means the only factor that drives the health care system, substantial control is gained through financing.  The new report from the CMS Actuary shows that our health care system has been, and will remain, a mixed public-private one.  Rising health care costs are a huge problem for people, the government, and the nation; but neither the government’s share of overall health spending nor the federal government’s share, in particular, will grow much over the next decade under current laws and policy.  Government obviously has a big role in our health system today, and the debate over the ACA has put it in the spotlight, but measured by this most basic standard, the Actuary shows that there is, in fact, no imminent danger of a government takeover.