This was published as a Wall Street Journal Think Tank column on December 4, 2014. 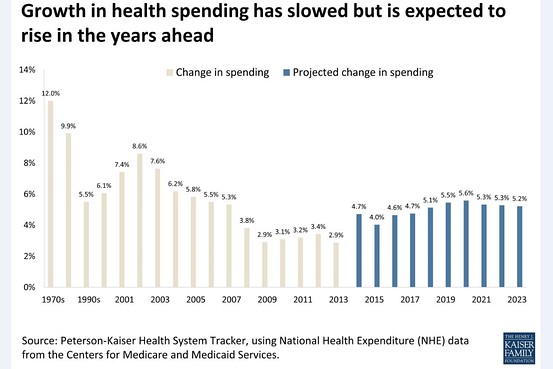 Positive action on multiple fronts and the recovering economy are helping to reduce the growth in health-care costs to historically moderate levels. But there is no comprehensive national approach to controlling health-care costs. Further, there is little coordination of the disparate efforts across the country, and we can’t say for sure what is working and what is not.

The Centers for Medicare and Medicaid Services (CMS) report released Wednesday showed that health-care spending per person grew 2.9% in 2013, in line with the modest rates of spending growth seen in recent years. As the chart above shows, per capita health-care spending is growing unusually slowly by historical standards, but it is projected to pick up again as the economy improves, as more people are covered under the Affordable Care Act, and as the population ages.

By 2020 growth in per capita health spending is projected to be almost twice the current rate. But that is still much slower than in many years past. If we were to shave one percentage point off the annual rate of increase in health spending, more than $2 trillion would be saved over the next 10 years. Similarly, cutting half a percentage point off projected increases would make a substantial difference.

Most current efforts to reduce costs and improve quality focus on reforming the delivery of medical care. The primary objective is to reduce unnecessary hospital stays and overuse of tests and procedures. The ACA is accelerating the pace of delivery reform and changing payment incentives primarily through pilot projects implemented by a new Innovation Center in the CMS. Pilot projects are testing shared savings with Accountable Care Organizations, bundled payments (rather than fee for service) for some illnesses, and coordinated care for people with multiple health needs who are eligible for both Medicare and Medicaid. The CMS pilots are to be independently evaluated, and the results will be closely watched.

These efforts at delivery reform have promise, but they are scattered across the country and highly variable. They do not represent a comprehensive approach to health-care costs.

The focus on delivery also does not address a major factor influencing demand for health services: health insurance. The country has been so focused on the Affordable Care Act, and many in health care have been so focused on reforming delivery and payment, that a veritable sea change in the nature of insurance has unfolded without much scrutiny or debate. Changes in insurance, especially changes in cost sharing such as the growth in high-deductible insurance plans, can strongly influence the demand for health services. The average deductible in an employer health plan is about $1,200; it is $1,800 for smaller employers, more than $2,000 for high-deductible plans with savings accounts, and more than $2,500 for the most commonly selected “silver” plan in the ACA insurance exchanges.

The price of health services is also unaddressed by delivery reform. While health prices have been rising fairly slowly in recent years, the price of health care, including what Americans pay for procedures and drugs and what we pay doctors, is what most distinguishes the cost of our system from those of other developed nations. There is growing interest in price transparency to help consumers shop for less expensive care, but far less attention is paid to reducing the actual prices we pay for health services.

One reason we lack a comprehensive approach to health costs is that it is not really anyone’s job in our fragmented health system. Health-care institutions are changing how they deliver care in ways that make sense for them, keeping an eye on market leaders and competitors. Insurers have increased cost sharing to dampen demand and keep their premiums lower. The public is alarmed by the high prices people pay for health care–but can’t do much about it. CMS oversees Medicare and Medicaid, but no government agency is responsible for developing a health-cost strategy or a comprehensive approach to dealing with delivery, demand, price, and other cost drivers. Such an approach would almost certainly represent a far greater role for government than would be palatable today. Our fragmented approach to controlling health costs may be enough while health spending is rising at historically moderate rates, but as the rate of increase picks up again pressure will rise do more, and for a more organized and comprehensive approach.