The U.S. government has a long history of supporting international maternal and child health (MCH) efforts, including global immunization activities, and is the largest donor government to MCH activities in the world.1,2 Between FY10 and FY16, the U.S. Congress provided $7.5 billion for MCH-specific activities (both bilateral and multilateral funding combined), of which $2.6 billion (35%) supported global immunization efforts.3,4 In FY16, Congress provided $1.21 billion for MCH and the President’s FY17 budget request includes $1.28 billion, a $69 million increase. Most funding for MCH is provided bilaterally, though the share given through multilateral channels has increased in recent years. This brief provides an overview of U.S. funding for MCH, including trends in bilateral and multilateral funding and top country recipients of U.S. funding, and places the U.S. within the larger context of overall donor support for the sector.5

The U.S. government has provided financial and other support for international MCH efforts, including global immunization activities, since the 1960s and is the largest donor government to MCH activities in the world.1,2 The U.S. Agency for International Development (USAID) serves as the lead agency for MCH and focuses its support on 24 priority countries.6 USAID works to improve the accessibility and quality of antenatal care, delivery care, and postnatal care; newborn health; immunizations (including polio); child health through the treatment of diarrhea, pneumonia, and malaria; as well as water, sanitation, and hygiene. Other U.S. agencies involved in international MCH efforts include the Centers for Disease Control and Prevention (CDC) (research and technical assistance), the Department of State (diplomatic and humanitarian efforts), the National Institutes of Health (NIH) (research), and the Peace Corps (volunteer activities). Additionally, USAID supports the integration of family planning with maternal care services, although Congress directs funding to and USAID operates these programs separately.7

Of USAID’s $632 million in bilateral funding in FY15 (the most recent year for which country level data are available; CDC funding is not available by recipient country), $477 million (76%) was provided to the 24 MCH priority countries. An additional 12 countries received bilateral funding directly (totaling $56 million) and others were reached through regional funding provided by the agency. The top recipient of funding in FY15 was Afghanistan ($67.1 million), followed by Nigeria ($48.0 million), Ethiopia ($39.3 million), Democratic Republic of the Congo ($34.8 million), Bangladesh ($30.0 million), Jordan ($24.8 million), Pakistan ($24.7 million), Indonesia ($20.0 million), South Sudan ($18.0 million), and Uganda ($16.0 million) (see Table 2). These top 10 recipients accounted for 59% of USAID’s country and regional specific assistance in FY15.

The U.S. also supports MCH efforts through multilateral contributions to UNICEF as well as to Gavi, the vaccine alliance. U.S. contributions to UNICEF, the lead UN agency supporting child health activities in many low- and middle-income countries, have remained relatively stable over the past decade, increasing slightly from $125.7 million in FY06 to $132.5 million in FY16.

Gavi, an independent public-private partnership and multilateral funding mechanism that aims to “save children’s lives and protect people’s health by increasing access to immunization in poor countries”, was created in 1999 and formally launched in 2000.11 The U.S. made its first contribution of $48 million in FY01 and U.S. contributions have greatly increased in recent years with multi-year funding commitments made by the Obama administration.12 In FY16 the U.S. provided $235 million to Gavi and the President’s FY17 request includes $275 million for Gavi, an increase of $40 million (17%). The U.S. is the second largest donor government, followed by the U.K., contributing $1.4 billion since Gavi was established. 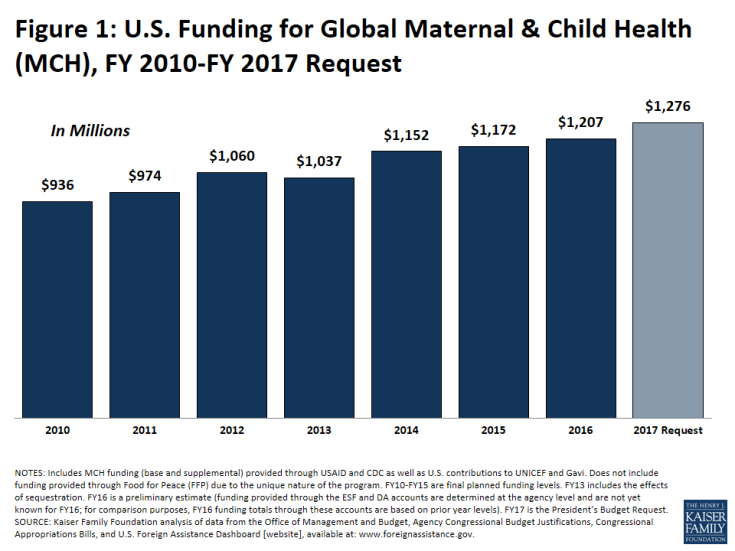 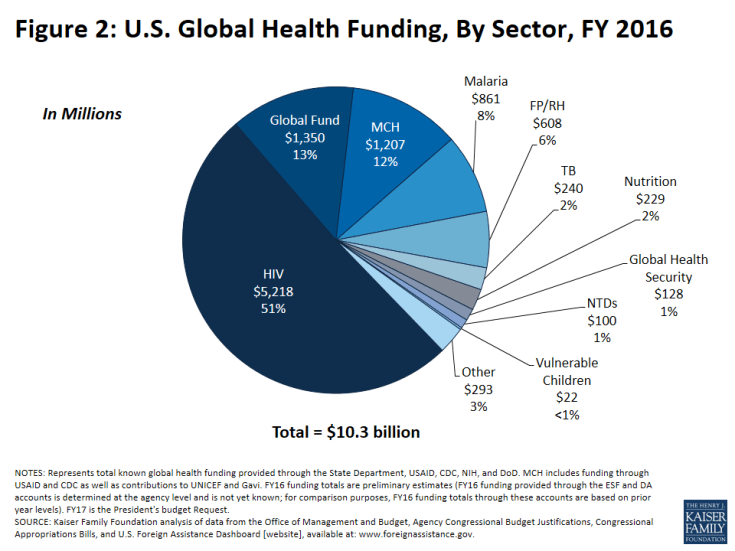 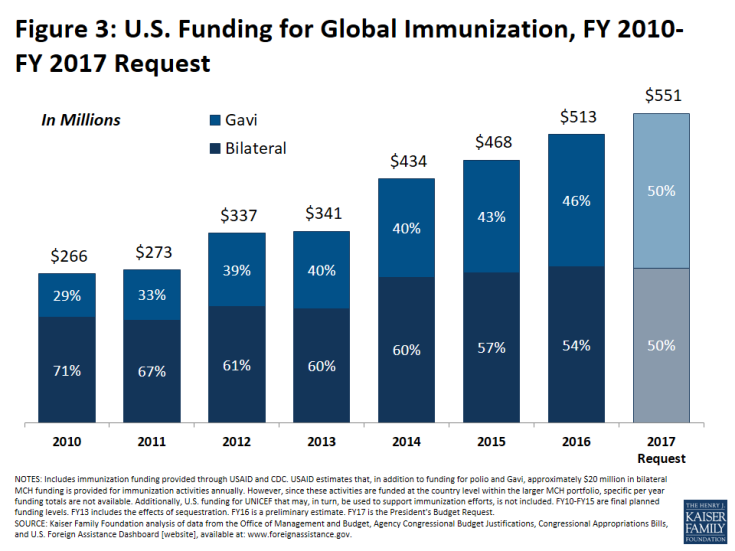