The President’s FY15 budget request, which was released on March 4, 2014, proposed $9.4 billion1 in funding for global health programs.  If enacted, this would represent a decline of approximately $350 million (-4%) from levels set in the FY14 Omnibus Appropriation and would essentially be a return to FY13 post-sequestration funding amounts.2 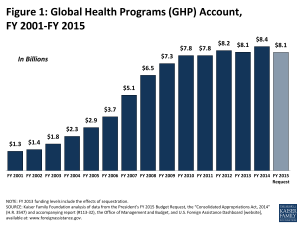 Most of the global health budget ($8.1 billion) specified in the FY15 budget request is provided through the Global Health Programs (GHP) account at USAID and the State Department (see Figure 1 & Figure 2). Within the GHP account, all programs would decline, with the exception of funding for malaria and Family Planning and Reproductive Health (FP/RH), which would both increase slightly; funding for bilateral HIV, through PEPFAR, would remain flat (see Figure 3).  The FY15 budget request includes $1.35 billion as the base U.S. contribution to the Global Fund to Fight AIDS, Tuberculosis, and Malaria (Global Fund), which is $300 million below the FY14 level and would account for a significant share of the total decline in global health funding, although this is in large part due to legislative restrictions on the U.S. contribution to the Global Fund (see Global Fund section below).3  Funding for tuberculosis (TB) efforts would represent the second largest decrease (-$45 million), followed by pandemic influenza (-$22.5 million) and nutrition (-$14 million).

The FY15 budget request includes a newly proposed “Opportunity, Growth, and Security Initiative” that would provide additional funding across many areas, including some for global health activities (e.g. for the Global Fund; see below). However, this new initiative, which proposes an additional $56 billion in discretionary funding (divided evenly between defense and non-defense), would be offset by mandatory spending reforms and higher revenues;4 it therefore, requires Congressional approval and remains uncertain.

If Congress approves the President’s FY15 Budget Request, global health funding would be impacted more than other areas when compared to broader budgetary trends, particularly when compared to final FY13 post-sequestration levels (see Table 1).  For instance, while funding for global health would remain essentially flat between FY 13 and FY 15, funding for international affairs overall would increase by 7%.5  In addition, funding for all non-defense discretionary programs, of which global health is a part, would increase by 3%.6  In both FY13 and FY14, however, Congress approved higher funding levels for global health than those proposed in the President’s budget request. Whether or not Congress continues this trend remains to be seen.

The summary below provides an overview of global health funding levels by program area as proposed in the FY15 Budget Request (unless otherwise stated, all comparisons are to enacted FY14 levels).7

PEPFAR’s bilateral HIV funding through the GHP account totaled $4,350 million ($330 million at USAID and $4,020 at the State Department) matching the FY14 funding level (Table 2), but more than $600 million below its peak level of $4,959 million in FY10.  Bilateral HIV accounts for the largest share (54%) of the global health portfolio under the GHP account.  The FY15 budget request for HIV includes funding for microbicides research ($45 million), U.S. contributions to IAVI ($28.7 million), the Commodity Fund ($20.3 million), and the Joint United Nations Programme on HIV/AIDS (UNAIDS) ($45 million).

The budget request also includes $375.9 million for HIV research activities at the National Institutes of Health (NIH) and $128.7 million in HIV funding through the Centers for Disease Control and Prevention (CDC); both totals match FY14 levels. Additional funding for HIV programs at the Department of Defense (DoD) is not yet known (in prior years, it has ranged between $8 and $10 million). 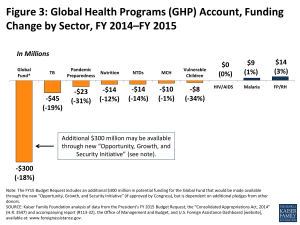 At the Global Fund’s 4th Replenishment Conference held in December 2013, President Obama announced that the U.S. would contribute $1 for every $2 pledged by other donors. The FY15 budget request proposes $1,350 million in base funding for the Global Fund towards fulfillment of this pledge.3  While base funding for the Global Fund is $300 million (-18%) below the FY14 level, the budget request includes an additional $300 million in potential funding that would be made available through the new “Opportunity, Growth, and Security Initiative” (if approved by Congress), but is dependent on additional pledges from other donors. The Global Fund accounts for the second largest share (17%) of global health funding (in the GHP account).

Funding for TB through the GHP account totaled $191 million, a $45 million (-19%) decrease below FY14 and would be the lowest level of funding since FY09. TB funding, which includes funding for the TB Drug Facility ($13.5 million), represented the second largest decrease (after the Global Fund) among all areas under the GHP account. Additional tuberculosis funding provided through the Economic Support Fund (ESF) account is not yet known (in prior years, it has ranged between $8 and $20 million).

Malaria funding totaled $674 million in the FY15 budget request and was one of only two program areas under the GHP account (the other being family planning & reproductive health) that increased above FY14 levels ($9 million or 1%). The budget request also includes $150.7 million for malaria research activities at NIH and $10.7 million in malaria funding through the CDC; both totals match FY14 levels. Additional malaria funding through DoD is not yet known (in prior years, it has ranged between $8 million and $30 million).

FP/RH funding totaled $538 million and was one of only two program areas under the GHP account (the other being malaria) that increased ($14.1 million or 3%) from FY14 levels. The FY15 budget request also included $35.3 million for the U.S. contribution to the United Nations Population Fund (UNFPA), essentially matching the FY14 level ($35.0 million).8 Additional FP/RH funding provided through other accounts such as the Economic Support Fund (ESF) is not yet known.

In the FY15 budget request, MCH funding through the GHP account totaled $695, a decrease of $10 million (-1%) below FY14 levels.  This includes $495 million in funding for bilateral programs and a $200 million contribution to GAVI.  Some additional MCH funding provided through other accounts, such as the ESF and Food for Peace (FFP) accounts, is not yet known. The FY15 budget request states that additional MCH funding would be provided through the new “Opportunity, Growth, and Security Initiative” (if approved by Congress), but does not specify an amount. Specific components of MCH funding include:

Nutrition funding in the request through the GHP account totaled $101 million, a $14 million (-12%) decrease below FY14. Additional nutrition funding provided through other accounts, such as the ESF and FFP accounts, is not yet known.

The FY15 budget request also proposed funding for areas and agencies that are not directly focused on U.S. global health, but are related and may impact these efforts including: the Millennium Challenge Corporation (MCC), Feed the Future (FtF), which is the U.S. Government’s Global Hunger and Food Security Initiative, broader food assistance through Food for Peace (FFP) and McGovern-Dole International Food for Education and Child Nutrition (McGovern-Dole), and other funding through the State & Foreign Operations Development Assistance (DA) and ESF accounts. Within the budget request, funding for the MCC  ($1,000 million) increased by more than $100 million (11%) above FY14 enacted levels, while funding for McGovern-Dole remained flat and funding for FtF and FFP declined – FtF declined by approximately $100 million (-9%) and FFP declined by $66 million (-4.5%) (see Table 3). The FY15 budget request proposes additional funding through the new “Opportunity, Growth, and Security Initiative” (if approved by Congress) for the MCC ($350 million) and Feed the Future (additional amount not specified).