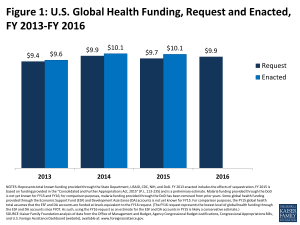 The President’s Fiscal Year 2016 (FY16) budget request, which was released on February 2, 2015 and is a key step in the federal budget process, proposed $9.9 billion in specified funding for global health programs.1 If enacted by Congress, this would represent a decline from levels set in the FY15 Omnibus Appropriations bill (not including emergency funding for Ebola that was provided in the FY15 Omnibus bill2).3 In each of the past three fiscal years (FY13-FY15), however, Congress has approved higher funding levels for global health than those proposed in the President’s budget request (see Figure 1).4 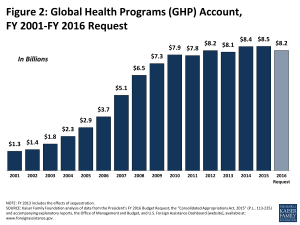 Most of the global health budget ($8.2 billion) specified in the FY16 budget request is provided through the Global Health Programs (GHP) account at USAID and the State Department (see Figure 2). Within the GHP account, funding for tuberculosis (TB), neglected tropical diseases (NTDs), global health security (formerly pandemic influenza and emerging threats), nutrition, and vulnerable children would decline compared to FY15 enacted levels, while malaria, maternal and child health (MCH), and family planning and reproductive health (FP/RH) funding would increase (see Figure 3 and Table 2). Funding for bilateral HIV, through the President’s Emergency Plan for AIDS Relief (PEPFAR), would remain essentially flat. The base U.S. contribution to the Global Fund to Fight AIDS, Tuberculosis and Malaria (Global Fund) would decrease, although the State and Foreign Operations (SFOPs) Congressional Budget Justification (CBJ) states that this amount would fulfill the existing U.S. pledge to the Global Fund (see Global Fund section below). The proposed decrease for the Global Fund accounts for a significant share of the total decline in global health funding in the FY16 budget request. 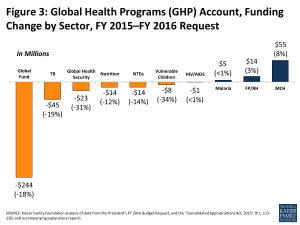 When comparing the President’s budget requests over time, several trends emerge (see Table 3). For instance, looking at specific program areas, MCH is the only program with a proposed increase in each budget request over the period between FY13-FY16. During the same period, TB and the Global Fund are the only programs with a proposed decrease from the prior request; all other programs either increased or remained flat. More recently, proposed funding for all programs in the FY16 request matched the levels proposed in the FY15 request, with the exception of MCH, bilateral HIV, and the Global Fund (bilateral HIV and MCH increased, while the Global Fund decreased).

It is important to note that total discretionary funding in the FY16 budget request, which includes global health, exceeds the estimated budget cap instituted by the Budget Control Act of 2011.7 Therefore, if Congress were to enact the President’s budget request, it would need to adjust the existing cap for FY16, which is essentially equal to the FY15 level. Congress will begin drafting appropriations legislation in the coming months; whether or not Congress provides a higher level of global health funding than proposed in the President’s request, either under an adjusted cap or the existing cap, is unknown.

This section provides an overview of global health funding levels by program area as proposed in the FY16 budget request (unless otherwise stated, all comparisons are to FY15 enacted levels). 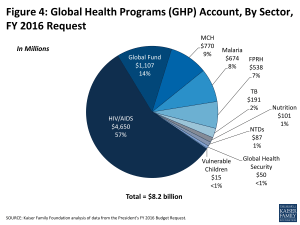 PEPFAR’s bilateral HIV funding through the GHP account totaled $4,649.5 million ($330 million at USAID and $4,319.5 million at the State Department), remaining essentially flat compared to the FY15 enacted level. Bilateral HIV accounts for the largest share (57%) of any program area within the global health portfolio under the GHP account (see Figure 4). Included within this amount is funding for microbicides research ($45 million) and the U.S. contribution to the Joint United Nations Programme on HIV/AIDS (UNAIDS) ($45 million). The FY16 request also included $300 million for a new “PEPFAR Impact Fund,” which would be provided to countries that work “to realign their national HIV/AIDS programs to focus on the highest-burden areas and sites, leveraging improved site-level data.”

The FY16 request also included $462.2 million for HIV research activities at the National Institutes of Health (NIH) and $128.4 million in HIV funding through the Centers for Disease Control and Prevention (CDC); NIH funding is a slight increase ($11 million), while the CDC amount matches the FY15 enacted levels. The FY16 request did not include any funding for HIV programs at the Department of Defense (DoD) (the FY15 enacted level was $8 million).

Malaria funding totaled $674 million through the GHP account in the FY16 budget request and was one of only three program areas under the GHP account that increased above the FY15 enacted level (by $4.5 million or 1%). The budget request also included $173.0 million for malaria research activities at NIH and $10.7 million in malaria funding through the CDC; NIH funding is a slight increase ($4 million), while the CDC amount matched the FY15 enacted level ($10.7 million). Additional malaria funding through DoD is not yet known (in FY14, it was $17.2 million).

Funding for maternal and child health (MCH) through the GHP account totaled $770 and was one of only three program areas under the GHP account that increased (by $55 million or 8%) from the FY15 enacted level. This includes $535 million in funding for bilateral programs and a $235 million contribution to Gavi, the Vaccine Alliance (Gavi). Additional MCH funding provided through the ESF account totaled $87.5 million (MCH funding provided through the ESF account in FY15 is not yet known; in FY14, it was $114.2 million). Specific components of MCH funding include:

The Global Health Security Agenda, an effort launched in February 2014 aimed at improving global capabilities to prevent, detect, and respond to epidemics and other emerging public health threats, includes funding from multiple agencies. At USAID, funding for global health security (formerly pandemic influenza and other emerging threats) is provided through the GHP account and totaled $50 million in the FY16 budget request, a decrease of $22.5 million (-31%) below the FY15 enacted level. Funding for Global Public Health Protection at CDC, which includes funding for Global Disease Detection and Emergency Response as well as Global Public Health Capacity Development, totaled $76.7 million in the FY16 budget request, a $21.6 million (39%) increase over the FY15 enacted level.

The U.S. provides additional global health funding in support of water, sanitation, and hygiene (WASH) activities, for international global health research efforts conducted through the Fogarty International Center (FIC) at NIH, and for multilateral organizations, such as the World Health Organization (WHO) and the Pan American Health Organization (PAHO), that play an important role in addressing global issues. The FY16 request included $228.0 million in funding for WASH activities provided through multiple accounts and programs (since WASH is considered a cross-cutting issue supported through direct funding as well as funding provided through other programs, such as HIV and MCH, it is not included within the overall global health total in order to prevent double-counting). The FY16 request also included $69.5 for FIC, a slight increase above the FY15 enacted level, as well as a $114.0 million contribution to WHO and a $66.1 million contribution to PAHO, both of which essentially match FY15 enacted levels.

Analysis of Other International Development Programs

The FY16 budget request also proposed funding for areas and agencies that are not directly focused on U.S. global health, but are related and may impact these efforts including: the Millennium Challenge Corporation (MCC), Feed the Future (FTF), which is the U.S. Government’s global hunger and food security initiative, broader food assistance through Food for Peace (FFP)13 and McGovern-Dole International Food for Education and Child Nutrition Program (McGovern-Dole), and other funding through the State & Foreign Operations Development Assistance (DA) and ESF accounts (see Table 4). Within the budget request, funding for the MCC ($1,250 million) increased by more than $350 million (39%) above the FY15 enacted level, while funding for McGovern-Dole remained flat and FFP declined (-$66 million or -4.5%). The FY16 budget request included $978.0 million for FTF ($900.3 million through the DA account and $77.7 million through the ESF account), which is $22.6 million (-2%) below the FY15 enacted level.