President Obama’s Fiscal Year (FY) 2014 federal budget request, released on April 10, includes an estimated $9.0 billion for global health programs under the Global Health Initiative (GHI).1 This would represent a 1.6% increase ($145 million) above FY 2012, which totaled $8.9 billion.1 Because funding for the current fiscal year, 2013, was only recently completed through a Continuing Resolution (CR) (signed by the President on March 26, 2013), which continued funding at FY 2012 levels for many programs, although made changes to others, and includes rescissions and a mandated sequestration, funding levels are not yet available for most global health programs; therefore comparisons made here are between the FY 2014 budget request and FY 2012, unless otherwise noted.2 Detailed data for FY 2009-FY 2014 are provided in Table 1. 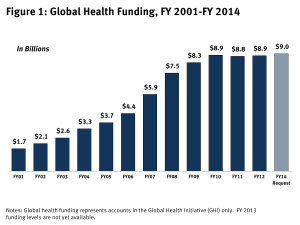 The U.S. government provides funding for global health programs through several agencies and multiple accounts. The agencies include the Department of State, U.S. Agency for International Development (USAID), National Institutes of Health (NIH), Centers for Disease Control and Prevention (CDC), and the Department of Defense (DoD).3 The main accounts are Global Health Programs (GHP), Development Assistance (DA), Economic Support Fund (ESF), and International Organizations and Programs (IO&P), all of which are managed by the State Department and USAID.3

In 2009, President Obama launched the Global Health Initiative (GHI), which acts as an “umbrella” over most but not all existing U.S. global health programs, accounting for more than 80% of the U.S. global health funding investment.4  The GHI brings together several different existing funding streams for global health, most of which are designated by Congress for specific global health activities but which have not historically been aggregated into a single “global health budget.”5 These include funding for: HIV/AIDS, tuberculosis (TB), and the Global Fund to Fight AIDS, Tuberculosis and Malaria (Global Fund) under the President’s Emergency Plan for AIDS Relief (PEPFAR); malaria, including the President’s Malaria Initiative (PMI); neglected tropical diseases (NTDs); maternal, newborn and child health (MNCH); family planning and reproductive health (FP/RH); and nutrition.

While Congress finalized FY 2013 appropriations prior to release of the FY 2014 budget request, funding amounts for most programs are not yet known, in part due to the impacts of sequestration. Additionally, the only global health funding levels specified by Congress for FY 2013 were HIV bilateral funding ($4,070 million) through the Department of State, funding for the Global Fund ($1,650 million), and a topline global health funding level at USAID ($2,756 million), without specific funding levels by programmatic area. Due to uncertainty in FY 2013 final funding levels, all FY 2014 comparisons are to FY 2012 levels.

GHI activities are focused on 9 program areas. In some, but not all areas, funding is provided by multiple agencies and/or accounts. In the FY 2014 budget request, funding for these areas is as follows: 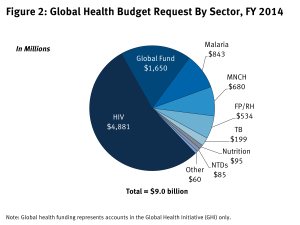 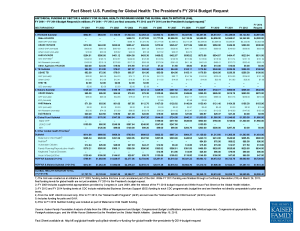 Kaiser’s Budget Tracker will monitor the plan as Congress considers and revises it during the budget and appropriations process.