The FY14 Omnibus Appropriations bill was signed into law by the President on January 17, 2014, with approximately $9.1 billion1 in U.S. funding for global health programs, its highest historical level, though global health funding represents less than 1% of the overall federal budget. Global health funding in FY14 increased by more than $400 million (5%) above FY13 post-sequestration levels (sequestration mandated an approximate 5% decrease from enacted levels to most discretionary programs, projects, and activities in FY13). Most of this funding ($8.4 billion) is provided through the Global Health Programs (GHP) account at USAID and the State Department (see Table 1).

Within the GHP account, all programs received funding increases, with the exception of Family Planning and Reproductive Health (FP/RH), which declined slightly. Bilateral HIV funding, as part of PEPFAR, received the largest dollar increase ($146 million), followed by the Global Fund to Fight AIDS, Tuberculosis and Malaria ($81 million), and Maternal and Child Health (MCH) programs ($78 million). 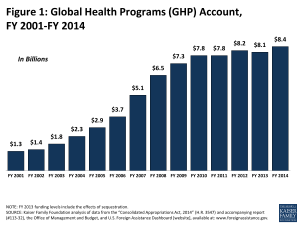 Looking more broadly at funding trends over time (focusing on the GHP account), increased funding for global health has been relative modest in recent years (rising 3% between 2012 and 2014, for example), after the substantial increases of the prior decade (see Figure 1). This was similar to the rate of growth in federal funding for other non-defense, discretionary spending over the same recent period (2%).2

The summary below provides an overview of global health funding levels by program area as specified in the FY14 Omnibus Appropriations bill.3 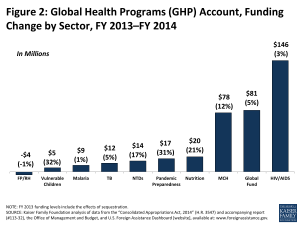 PEPFAR’s bilateral HIV funding through the GHP account totaled $4,350 million ($330 million at USAID and $4,020 at the State Department), an increase of $146 million (3%) above FY13, demonstrating the largest increase among all areas (Figure 2). Bilateral HIV accounts for the largest share (52%) of the global health portfolio under the GHP account (Figure 3). The Omnibus bill also provided $114 million in HIV funding through the Centers for Disease Control and Prevention (CDC), a $3 million (3%) increase above FY13, and $8 million in funding for HIV programs at the Department of Defense (DoD), which matches the FY13 level. Additional funding for HIV research activities at the National Institutes of Health (NIH) is not yet known. 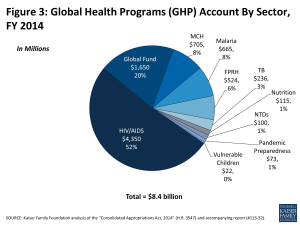 FP/RH funding through the GHP account totaled $524 million and was the only program area under the GHP account that declined from FY13 levels (-$4.0 million or -1%). However, Congress stated in the Omnibus bill that total bilateral funding for FP/RH programs should be “not less than $575 million” ($524 million through the GHP account and $51 million through the ESF account) and included an additional $35 million for the U.S. contribution to the United Nations Population Fund (UNFPA), essentially matching final FY13 funding levels ($610 million). While the Omnibus bill maintains existing policy requirements prohibiting the use of foreign assistance to pay for the performance of abortion as a method of family planning or to motivate or coerce any person to practice abortion, it does not include a reinstatement of the “Global Gag Rule”, which required foreign NGOs to certify that they would not perform or promote abortion as a method of family planning using funds from any source as a condition for receiving U.S. funding, nor does it prohibit funding for needle exchange programs – provisions that had been included in the House SFOPs appropriations bill.

In FY14, MCH funding through the GHP account totaled $705, an increase of $78 million (12%) above FY13 and the third largest increase among all areas. Some additional MCH funding provided through other accounts is not yet known. Specific components of MCH funding include:

Nutrition funding through the GHP account totaled $115 million, a $20 million (21%) increase above FY13. Additional nutrition funding provided through other accounts, such as the ESF account, is not yet known.

The Omnibus bill also provided funding for areas and agencies that are not directly involved in U.S. global health, but are related and may impact these efforts including the Millennium Challenge Corporation (MCC), Feed the Future (FtF), which is the U.S. Government’s Global Hunger and Food Security Initiative, broader food assistance through Food for Peace and McGovern-Dole International Food for Education and Child Nutrition, and other funding through the State & Foreign Operations Development Assistance (DA) and Economic Support Fund (ESF) accounts. Within the Omnibus bill, funding for all of these areas increased above FY13 levels with the exception of the overall DA and ESF accounts; the DA account declined by more than $200 million (-8%) and the ESF account declined by almost $1 billion (see Table 2). The ESF decrease, however, is entirely attributed to decreases in funding for Overseas Contingency Operations (OCO), which provides funding for programs in Iraq, Afghanistan, and Pakistan; non-OCO funding in the ESF account actually increased.