Access to family planning and reproductive health (FP/RH) services is critical to the health of women and children worldwide. Improving access to FP/RH services globally can help prevent maternal deaths and reduce unintended pregnancies. Each year, approximately 303,000 women die from complications during pregnancy and childbirth, almost all in developing countries.1 It is also estimated that approximately one-third of maternal deaths could be prevented annually if women who did not wish to become pregnant had access to and used effective contraception.2

Family Planning (FP): The ability of individuals and couples to anticipate and attain their desired number of children and the spacing and timing of births.3

Reproductive Health (RH): The state of complete physical, mental, and social well-being, and not merely the absence of disease or infirmity, in all matters relating to the reproductive processes, functions, and system at all stages of life.4

Key factors contributing to maternal deaths and unintended pregnancy include:5

Worldwide, 214 million women have an unmet need for modern contraception (i.e., they do not wish to get pregnant and are using no contraceptive method or a traditional method).6 Access to FP methods, including traditional methods, varies significantly by region (see Table 17). Unmet need for FP is highest in regions like sub-Saharan Africa and Oceania where contraceptive prevalence is low.8 Adolescent fertility rates have declined slowly and remain particularly high in sub-Saharan Africa, where child marriage remains common, and in Latin America and the Caribbean.9 While the percentage of pregnant women receiving the recommended minimum number of four antenatal care visits has been on the rise, it is 52% in developing countries and lower still in sub-Saharan Africa and Southern Asia.10 Each year, approximately 47,000 women die from complications associated with unsafe abortion.11 Access to and use of effective contraception reduces unintended pregnancies and the incidence of abortion.12

Reasons for the lack of access to and, in some cases, utilization of FP/RH services include low awareness of the risks of sexual activity, such as pregnancy and HIV; cost; gender inequality; and laws in some countries that require women and girls to be of a certain age or have third party authorization, typically from their husband, to utilize services.13 See Table 1.

FP/RH encompasses a wide range of services that have been shown to be effective in decreasing the risk of unintended pregnancies, maternal and child mortality, and other complications. These include:

There are several key global goals for expanding access to and improving FP/RH services, including:

This goal, adopted in 2015 as part of Sustainable Development Goal (SDG) 3 – “ensure healthy lives and promote well-being for all at all ages,” is to “ensure universal access to sexual and reproductive health care services, including for family planning, information, and education, and the integration of reproductive health into national strategies and programmes.”15 The SDGs are the successor to the Millennium Development Goals (MDGs), which also included this goal as a specific target under MDG 5 (improve maternal health).16

In July 2012, the government of the United Kingdom and the Bill & Melinda Gates Foundation – in partnership with the United Nations Population Fund (U.N. Population Fund or UNFPA), civil society organizations, developing countries, donor governments, the private sector, and multilateral organizations – co-sponsored the London Summit on Family Planning, an effort to provide voluntary family planning services to an additional 120 million women and girls in developing countries by 2020 through new commitments. This goal is being monitored by Family Planning 2020 (FP2020), a global partnership created as an outcome of the Summit. In July 2017, the second London Summit on Family Planning reviewed progress made thus far.17

The U.S. has a long history of engagement in international family planning and population issues, and today, the U.S. government is the largest donor to global FP/RH efforts and is one of the largest purchasers and distributors of contraceptives internationally.18 Congress first authorized research in this area in the Foreign Assistance Act of 1961.19 In 1965, the U.S. Agency for International Development (USAID) launched its first FP program and, in 1968, began purchasing contraceptives to distribute in developing countries. In the 1980s, USAID programs expanded to address maternal, newborn, and child health as well as the relationship between population, health, and the environment; and in the 1990s, USAID FP/RH programs began to recognize the need for male involvement in FP/RH and focus on the needs of young people.20 More recently, the U.S. adopted a longer term global health goal of ending preventable child and maternal deaths by 2035 and highlighted the important role of FP/RH efforts in achieving this goal.21 U.S. funding for FP/RH is governed by several legislative and policy restrictions, including a legal ban on the direct use of U.S. funding overseas for abortion as a method of family planning (which has been in place since 1973) as well as more stringent restrictions in some years, such as the Mexico City Policy (see below).

USAID operates FP/RH programs in more than 30 countries, with a focused effort in 24 priority countries that are mostly in Africa and Southern Asia.22 The agency’s stated FP/RH objective is to help countries meet the FP/RH needs of their people.23 It does this by expanding sustainable access to quality voluntary FP/RH services, commodities, and information (see Table 224) that enhance efforts to reduce high-risk pregnancies; allow sufficient time between pregnancies; provide information, counseling, and access to condoms to prevent HIV transmission; reduce the number of abortions; support women’s rights; and stabilize population growth.25 These efforts aim to contribute to the global goal of reaching more than 120 million more women and girls in the world’s poorest countries with access to voluntary FP information, contraceptives, and services by 2020.26

Also carrying out FP/RH efforts are the Centers for Disease Control and Prevention (CDC) (research, surveillance, technical assistance, and a designated World Health Organization Collaborating Center for Reproductive Health);27 the Department of State (diplomatic and humanitarian efforts); the National Institutes of Health (NIH) (research); and the Peace Corps (volunteer activities).

The U.S. works with several international institutions, partnerships, and other donors to carry out FP/RH efforts. Among them are the U.N. Population Fund (UNFPA, the largest purchaser and distributor of contraceptives worldwide – though the current Administration. has determined the U.S. will withhold its contribution to UNFPA in FY 2017 and FY 2018; see below); Family Planning 2020 (FP2020, an international partnership to expand access to family planning services in which the U.S. is a core partner); and the Global Financing Facility (GFF, a partnership to improve the health of women, children, and adolescents through innovative financing in which the U.S. is an investor).29

Total U.S. funding for FP/RH, which includes the U.S. contribution to UNFPA, has increased from $425 million in FY 2006 to $608 million in FY 2019 (see Figure 1). However, the current Administration has withheld the U.S. contribution to UNFPA for FY 2017, FY 2018, and FY 2019 due to the Kemp-Kasten Amendment.31 Additionally, it proposed eliminating FP/RH funding for FY 2018,32 though Congress ultimately held funding level, and, as in FY 2019, has proposed significantly reducing FP/RH funding for FY 2020.

Most U.S. funding for FP/RH is part of the Global Health Programs account at USAID, with additional funding provided through the Economic Support Fund account. FP/RH funding is also provided through the International Organizations & Programs account at the Department of State for the U.S. contribution to UNFPA. Under current U.S. law, any U.S. funding withheld from UNFPA is to be made available to other family planning, maternal health, and reproductive health activities.33 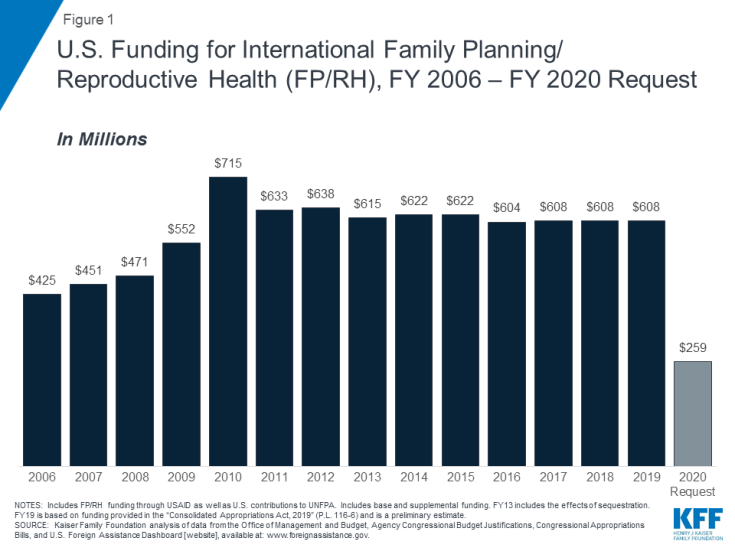 Legal, policy, and programmatic requirements for U.S. funding for international FP include (also see the KFF fact sheet on these and other requirements):

Since 1973, through the Helms Amendment, U.S. law has prohibited the use of foreign assistance to pay for the performance of abortion as a method of family planning or to motivate or coerce any person to practice abortion.

First instituted by President Reagan in 1984 through executive order, the Mexico City Policy (the “Global Gag Rule”) required foreign non-governmental organizations (NGOs) to certify that they would not perform or promote abortion as a method of family planning using funds from any source as a condition for receiving U.S. funding. A highly debated issue, this policy was rescinded by President Clinton, reinstated by President Bush, rescinded by President Obama, and reinstated – in an expanded form – by President Trump in January 2017. The current Administration’s application of the policy extends to the vast majority of U.S. bilateral global health assistance, including funding for FP/RH, HIV under PEPFAR, maternal and child health, malaria, nutrition, and other programs; in past iterations, it applied to family planning assistance only. Under the current administration, the policy has been renamed “Protecting Life in Global Health Assistance.” See the KFF explainer on the Mexico City Policy.

The principles of ensuring voluntary use of FP/RH services as well as informed choice of FP/RH options are specified in legislative language and program guidance.

In recent years, growing global attention has highlighted the need to augment FP/RH services worldwide and increase coverage and access. As the global community endeavors to support and fund efforts to achieve SDG 3’s FP/RH targets, the future of U.S. FP/RH efforts is more uncertain, with questions about the extent to which the current Administration will support FP/RH efforts (given the Jan. 2017 reinstatement and expansion of the Mexico City Policy, its Kemp-Kasten determinations regarding UNFPA, and recent budget requests to eliminate or significantly reduce FP/RH funding), and the strength of bipartisan support in Congress for FP/RH. Policy debates and discussions within and among Congress and the current Administration regarding the U.S. role in FP/RH (such as its role in fostering progress toward global goals related to providing access to FP/RH services) and the amount and use of U.S. funding (including legal and policy requirements) are likely to continue. Other key issues and challenges for U.S. efforts include: