States Have Made Progress in Vaccinating Older Adults Against COVID-19 in Recent Weeks, But No State Has Vaccinated At Least Half of its Older Population

Twenty-two states and the District of Columbia have vaccinated at least one-third of their residents who are 65 and older against COVID-19, an updated KFF analysis finds, but no state has crossed the threshold of vaccinating 50 percent or more of its older population.

The share of adults 65 and older who have received at least one dose of a vaccine ranges from 49 percent in North Carolina to 27 percent in Pennsylvania. (The relatively low rate in Pennsylvania is partly explained by data not included from Philadelphia county.) The analysis examines COVID-19 vaccination rates among older adults in the 33 states and DC that reported such data at the person-level as of February 23, 2021.

Moreover, between February 4 and February 23, vaccination rates among older adults have increased across each state that reported consistently at both points in time, with increases ranging from 10 to 22 percentage points. 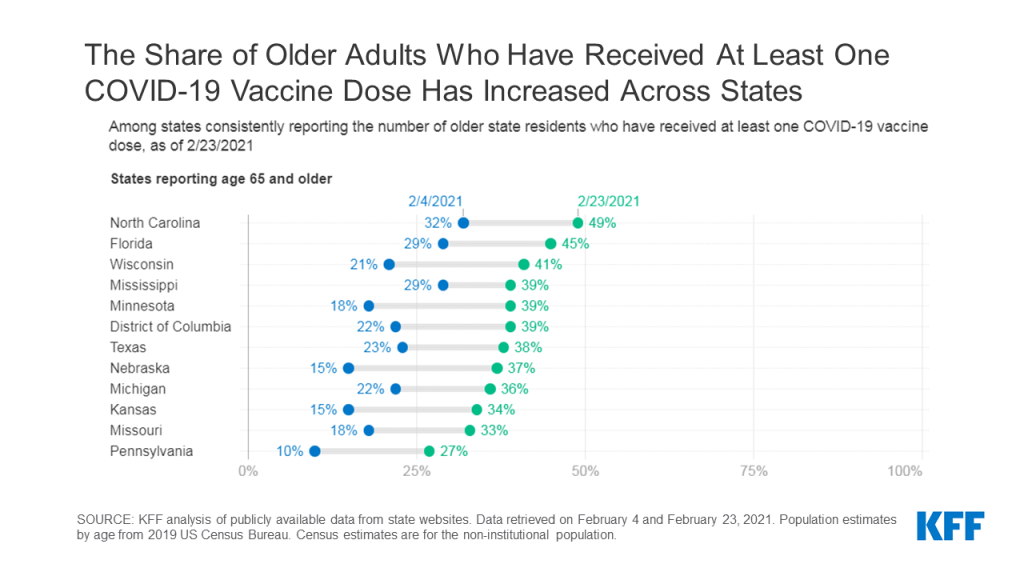 While 33 states and DC report vaccinations by age at the person level, just two states — South Carolina and Washington — report the data by both age and race/ethnicity, the new analysis finds. In these states, the data shows that larger shares of older White adults have been vaccinated than older Black and Hispanic adults.

Older adults are more vulnerable to serious illness and death from the novel coronavirus. Since January 12, the federal government has recommended that states expand vaccine eligibility to anyone 65 and older. As of February 22, 41 states and the District of Columbia had done so.