One of the most politically polarizing elements of the Affordable Care Act (ACA) is the law’s requirement that new private health insurance plans cover prescription contraceptives and services, including all methods approved by the Food and Drug Administration. The rule currently provides an exemption for houses of worship and an “accommodation” for religiously affiliated non-profit employers who object to providing contraceptive coverage; however all for-profit employers that provide health insurance must include this benefit. Over forty for-profit corporations have filed lawsuits claiming that the requirement violates their religious rights, and the cases of two corporations, Hobby Lobby and Conestoga Wood Specialties, have reached the Supreme Court. The oral arguments for these cases was heard at the end of March 2014, and in April, over four in ten (44 percent) of the public reported following the news coverage of the oral arguments “very” or “fairly closely.”1 The Supreme Court is expected to announce a decision on these cases in late June. This data note takes a closer look at what the public thinks about this issue.

A majority of the public (58 percent) supports the law’s requirement that private health insurance plans cover the full cost of birth control. On the issue facing the Supreme Court, a somewhat smaller majority (53 percent) believes the contraceptive coverage rule should apply to for-profit companies, even if it violates their owners’ personal religious beliefs, while four in ten (41 percent) say employers that object on religious grounds should not be subject to the requirement, even if it means their female employees will have to pay the cost of birth control themselves. As illustrated in Figure 1, gender and party differences exist on both of these questions, with women more likely to support the requirement than men, and those who identify as Democrats and independents more likely to support it than Republicans.

Support for the contraceptive coverage requirement also varies by age, and looking at age and gender together illuminates an interesting pattern. Across all age groups, women are consistently more likely than men to support the contraceptive coverage requirement and its application to for-profit companies whose owners have religious objections (Figure 3). While support decreases with age for both men and women, majorities of women in all age groups are supportive of the requirement and believe for-profit companies should abide by it even if their owners have religious objections, while among men, support only reaches above 50 percent for the youngest group (those ages 18-34). 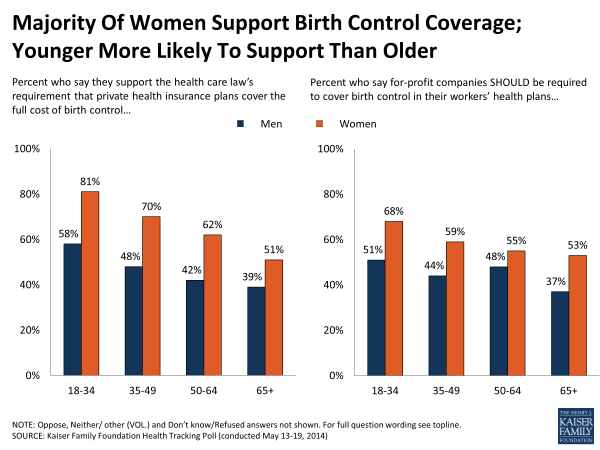 Among Catholics, who make up about one in five adults, a majority supports both the contraceptive coverage requirement and its application to for-profit companies whose owners have religious objections. Gender differences within Catholics are again apparent on both questions, with Catholic men being nearly evenly divided on both questions, and about two-thirds of Catholic women in support (Figure 5).

Although Republican women are more likely to support the requirement than Republican men, they are still much less likely to support it than independent and Democratic women. In fact, Republican women are one of the only subgroups of women in which support for the contraceptive requirement drops below 50 percent (46 percent support, 45 percent oppose). When asked whether for-profit companies should be required to cover contraception even if their owners object, a smaller share of Republican women (39 percent) say for-profit companies whose owners have religious objections should be required to cover birth control, while 59 percent say these companies should not be subject to the requirement (Figure 7). 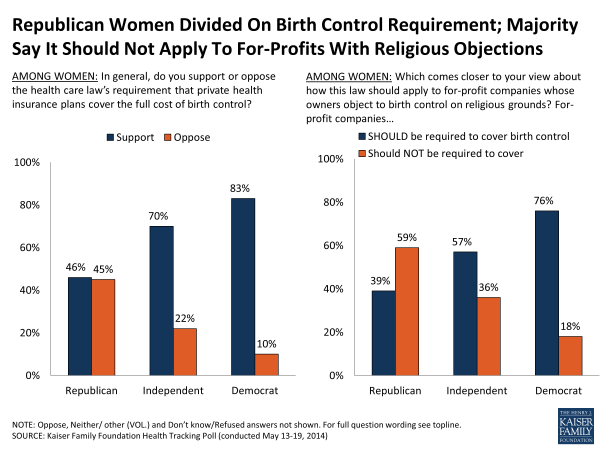 While the majority of adults support the ACA’s contraceptive coverage requirement in private health plans and most feel that it should apply to for-profit employers regardless of owners’ religious views (the question currently being considered by the Supreme Court), there are significant differences between women and men. Support is stronger among women than men, and women’s support holds across age groups, religious beliefs, and political party affiliations, with majorities of most subgroups of women supporting the contraceptive coverage policy and believing the requirement should apply to for-profit companies whose owners have religious objections. Support among men is lower than among women and does not rise above 50 percent for most subgroups of men. However, the importance of party affiliation is evident, as Republican women and Democratic men are notable exceptions to these overall patterns. With public opinion on this topic deeply divided by party, the Supreme Court’s ruling is likely to reignite debate across the political spectrum.