This column was published as a Wall Street Journal Think Tank column on October 12, 2016. 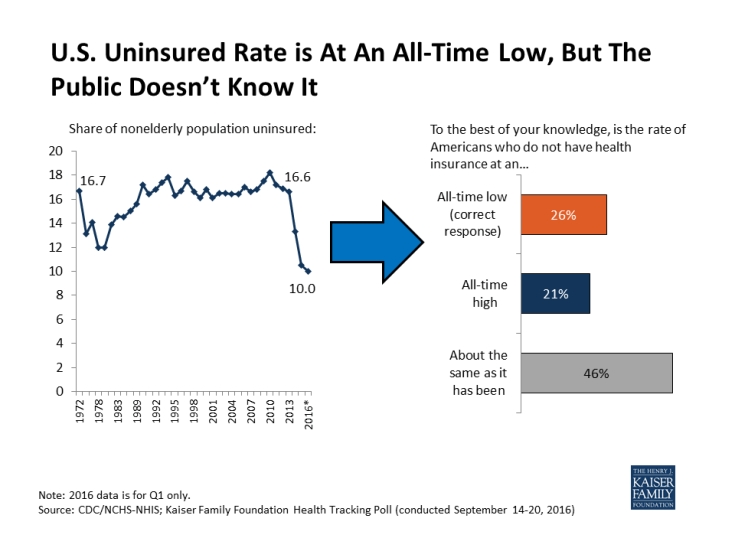 U.S. Uninsured Rate is At An All-Time Low, But The Public Doesn’t Know It

Donald Trump derided the Affordable Care Act in the second presidential debate as a “total disaster.” One inarguable success of the 2010 health-care law has been to drive the rate of uninsured Americans to a historic low. That sizeable shift makes it significant that a plurality of the public thinks the uninsured rate is unchanged and that the number of people who know the uninsured rate is at its low point is nearly the same as the number of people who mistakenly think the rate is at an all-time high.

To be specific: The uninsured rate for non-elderly Americans has fallen from about 16.6% in 2013 to 10% in the first quarter of 2016, and  8.6% taking into account seniors who have near universal coverage.

Why don’t more people know this? It’s not that the news media have failed to cover the story. There have been regular news reports about government and private surveys showing progress on this issue because of the ACA.

One factor affecting perceptions could be that a large number of Americans remain uninsured and the public may see these uninsured people among their family and friends or in their community as often or more often than they see the newly insured. Slightly less than 29 million Americans remain uninsured; just under half of those people are eligible for health coverage through the ACA.

There have been many reports the past couple of months about problems in some of the ACA marketplaces, where premiums have risen sharply in some areas of the country (if far more slowly, on average, than Mr. Trump asserted in Sunday’s debate). It’s possible that negative reports focused on the marketplaces have colored perceptions of progress in other areas, including on the uninsured rate.  A contributing factor could be media coverage of the 19 states that have not expanded their Medicaid programs under the ACA. Slightly less than 3 million people fall in the coverage gap as a result of these state decisions and remain uninsured. This has been a hot issue, but people may assume the problem is larger than it actually is. Vox’s Sarah Kliff wrote recently about the news media’s tendency to cover problems and suggested that a media “negativity bias” might play a role in limited awareness of the decline in the uninsured.

It could also be that categories experts refer to–uninsured, insured, under-insured–aren’t as meaningful for non-experts. People who are uninsured and people who have insurance both struggle to pay medical bills. Categorizing insurance status for statistical purposes may be more meaningful to experts who can recite study after study about how much insurance matters than it is to consumers struggling with medical bills even if they have coverage.

It’s notable that one factor that usually explains most everything about the ACA, partisanship, does not seem to apply as well here. More Democrats (38%) know the uninsured rate is at an all-time low than Republicans (17%), but the share of Republicans who think the rate is at an all-time high (20%) is similar to the share of Democrats who think that (17%).

Without knowledge of the facts people are more susceptible to spin and misrepresentation. The Affordable Care Act has covered about 20 million previously uninsured Americans but has little chance of improved standing with the public unless its most important achievement is better known. For various reasons–they’ve reported on this trend before, the decline itself is not new information–journalists, researchers and elected officials may tire of repeating numbers of the uninsured. And the data may not be new research or a fresh sound bite. But if informing the public on big issues under debate is a goal, new ways may need to be found to get the facts out again and again.