The increase in the uninsured rate in recent years, as well as loss of coverage during the pandemic, has led to attention on the consequences of being uninsured. The need for medical care to test, treat, or prevent COVID-19 has also highlighted the potential consequences of uncompensated care for uninsured people. Uncompensated care costs occur because, although people who are uninsured use less care than people with coverage, most who are uninsured have limited income or resources and cannot afford the high cost of medical care, if and when they do need or use health care.

While this analysis finds significant declines in uncompensated care across providers and services following the ACA coverage expansions, the nation still faces sizable uncompensated care costs. As detailed elsewhere, while providers incur significant costs in caring for the uninsured, the bulk of their costs are compensated through a web of complex funding streams that are financed largely with public dollars. However, these approaches may be inefficient, may not target funds to providers with the most uncompensated care, or may still leave uninsured people with bad debt, credit issues, or even bankruptcy. Provider charity covers some of the remaining uncompensated care costs, and a very small share, estimated to account for less than one percent of private insurance payments, is potentially covered through cost-shifting to those with private insurance. Even before the pandemic, the uninsured rate in the United States had ticked up in recent years; potential losses of coverage due to pandemic-related job loss could exacerbate these losses and reverse to some extent the significant coverage gains seen since the full implementation of the ACA in 2014. At the same time, recent efforts – including reopening of ACA enrollment by the Biden Administration and enhanced premium subsidies and new incentives for states to expand Medicaid under the American Rescue Plan – could increase the number of people covered.

The economic downturn caused by the COVID-19 pandemic could potentially lead to more people in the United States being uninsured. In addition to posing challenges to these individuals’ ability to access needed health care and be protected from medical debt, rising uninsured rates could exacerbate issues with uncompensated care costs associated with providing health care to the uninsured. Though uninsured people use less care than their insured counterparts, when they do use care and cannot pay for it themselves, the cost of that care is uncompensated.  Providers may absorb these costs as bad debt or tap into other funding sources to cover some of the costs. However, these approaches may be inefficient, may not target funds to providers with the most uncompensated care, or may still leave uninsured people with bad debt, credit issues, or even bankruptcy.

Over the years, the federal government, states, and localities have devoted considerable resources to pay providers for care they provide to uninsured patients through several program efforts (e.g., community health centers, Veterans Health Administration, and indigent care programs) and also through direct financial support (e.g., Medicaid Disproportionate Share Hospital (DSH) payments, and uncompensated care pools). However, the policy that has had the largest impact on reducing uncompensated care costs is arguably the enactment of the Affordable Care Act, which expanded health insurance coverage and helped shrink the nation’s uninsured rate to the lowest level in recorded history. Other research has documented declines in uncompensated care for specific types of providers, but to date there is no assessment of system-wide changes in uncompensated care for the uninsured after the ACA.

In this brief, we look at how uncompensated care costs for the uninsured changed following implementation of the ACA’s major coverage provisions in 2014. Specifically, building on previous analyses, we use Medical Expenditure Panel Survey (MEPS) data to examine health care costs associated with care provided to uninsured people ages 0-64 before and after the ACA coverage provisions took effect. We also examine sources of payment for uncompensated care costs and the allocation of these costs across types of providers and services. Additional details on the methods underlying the analysis are in the Methods Overview below and in the technical appendix at the end of the brief.

Like prior research, we find that the uninsured rate among nonelderly individuals dropped significantly following implementation of the ACA’s coverage provisions. Based on analysis of MEPS, the average annual share of the nonelderly who were ever uninsured during the year in 2015-2017 was 19.6 percent, down from 25.5 percent in 2011-2013. This represents a decline in the number of people who were uninsured at some point during the year from 70.7 million to 53.3 million over the period. We also found a similar decrease in the share of individuals uninsured for the full year (Table 1).

Consistent with the decline in uninsured rates, we find that the average annual share of nonelderly individuals who had any uncompensated care costs significantly fell by more than a third following ACA implementation, going from 7.3 percent in 2011-2013 down to 4.8 percent in 2015-2017. This change represents a decline in the number of people with uncompensated care costs from 20.2 million to 13.1 million (Table 1). 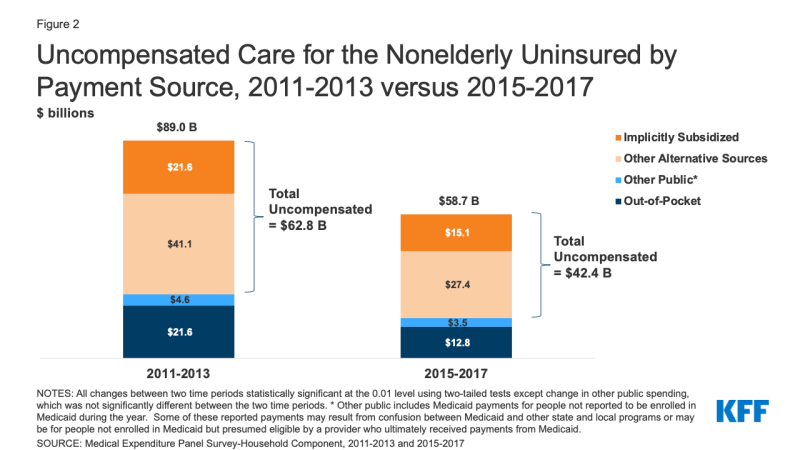 Despite declines in total amounts, the majority of aggregate expenses incurred by uninsured people were uncompensated in both 2011-2013 and 2015-2017.  The distribution of aggregate spending for the uninsured was similar across the two periods. Uncompensated care costs accounted for about 70 percent of total average annual medical expenditures for the uninsured estimated at $89.0 billion and $58.7 billion, respectively, before and after ACA implementation. These totals reflect aggregate spending for the full-year uninsured and part-year uninsured for the periods when they lacked coverage. Through out-of-pocket payments, the uninsured themselves paid 21.8 percent ($12.8 billion) of the population’s annual average aggregate expenditures in 2015-2017. Remaining direct expenditures ($3.5 billion, or 6.0 percent) in 2015-2017 was composed of other public spending.2

Changes in Uncompensated Care Per Capita Among the Nonelderly Uninsured

As in the past, people who are uninsured for the full year have much lower health care spending from all sources than those with coverage for some or all of the year. As shown in Table 1 (above), most people who are uninsured at some point during the year do not have any uncompensated care when they are uninsured. Many delay or avoid using care, even when needed, and others may use care but pay out of pocket for that care. In addition, on an average per capita basis, uninsured people had significantly lower per capita spending than the full-year insured, which was estimated to be an average of $5,591 in 2015-2017 (data not shown). Among the uninsured, per capita spending was twice as high for those who were uninsured for only part of the year compared to those who were uninsured all year both before and after the ACA (Figure 3). The higher spending of the part-year uninsured is due to their spending while insured, which accounted for the majority of their expenditures. 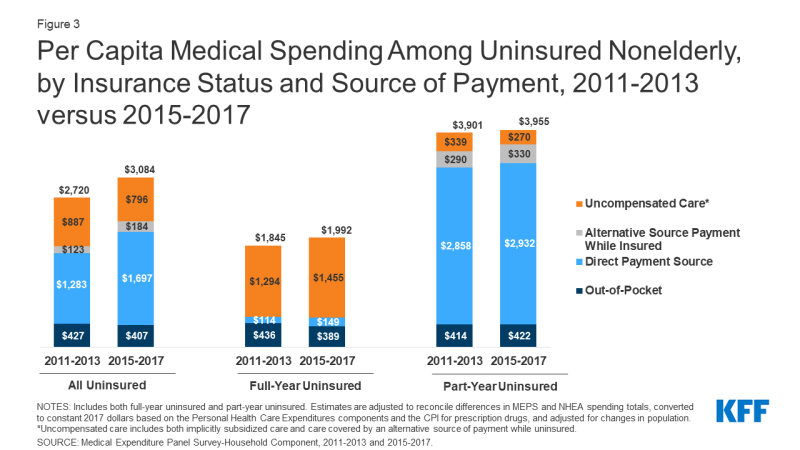 Figure 3: Per Capita Medical Spending Among Uninsured Nonelderly, by Insurance Status and Source of Payment, 2011-2013 versus 2015-2017

The ACA brought about a significant decline in provider uncompensated care costs in caring for the uninsured. This result was anticipated given the major coverage expansion afforded by the ACA. However, the ACA did not offer universal health insurance coverage and not all states adopted the Medicaid expansion. As a consequence, while uncompensated care costs declined by nearly a third following implementation of the ACA’s major coverage provisions in 2014, these costs continue to be considerable. We estimate uncompensated care costs totaled $42.4 billion in 2015-2017, with $15.1 billion of those costs implicitly subsidized, or not tied to any payment source such as non-health insurance sources of payment.

Importantly, multiple programs sponsored by federal, state, and local governments help health care providers offset a sizable share of these costs. However, these approaches may be inefficient, may not target funds to providers with the most uncompensated care, or may still leave uninsured people with bad debt, credit issues, or even bankruptcy.  Provider charity covers some of the remaining uncompensated care costs, and a very small share, estimated to account for less than one percent of private insurance payments, is potentially covered through cost-shifting to those with private insurance. Research examining trends in private hospital payments and changes in the uninsured, as well as research examining private insurance payment rates and market power among large hospitals with high uninsured patient mix, has not found a consistent, close link between the uninsured and increase private payment rates to offset uncompensated care costs.

Uncompensated care costs may be on the rise. Since 2017, the last year of our study period, the uninsured rate increased both in 2018 and 2019, growing by a million and a half people during that two-year period, which likely brought about an uptick in uncompensated care costs. Further, the widespread job losses resulting from the COVID-19 pandemic in 2020 threaten to put health insurance coverage at risk for millions of workers and their families.  As of February 2021, the unemployment rate stood at 6.2 percent, nearly double the pre-pandemic level, and many workers have left the labor force. While many who lose employer coverage could become eligible for Medicaid or ACA marketplace subsidies, some may not enroll, and others may continue to be ineligible for coverage. The need for medical care to test, treat, or prevent COVID-19 has also highlighted the potential consequences of uncompensated care for uninsured people.

A rise in uncompensated care costs is always a concern but particularly so now given that the expected increase in these costs occurs at a time when state and local governments face declining revenues because of the pandemic-induced recession. A drop in revenues could jeopardize funding for existing programs that help offset uncompensated care costs, just as some providers have incurred significant financial losses from COVID-19. While the federal government has made provider relief funds available to reimburse providers for treating patients with COVID-19, there is no guaranteed allotment of funds for uninsured patients, and limited funds have been paid out to offset costs for uninsured patients to date.

Given the heightened need for health care among many due to the pandemic, additional coverage loss at a time of shrinking resources to cover health care expenses could further challenge the ability of the health care system to meet needs. At the same time, recent efforts – including reopening of ACA enrollment by the Biden Administration and enhanced premium subsidies and new incentives for states to expand Medicaid under the American Rescue Plan – could increase the number of people covered and put reduced pressure on providers and government sources of financing for uncompensated care.

Michael Karpman and Teresa A. Coughlin are with the Urban Institute. Rachel Garfield is with KFF.