Uncompensated Care for the Uninsured in 2013: A Detailed Examination

Despite not having health insurance, millions of uninsured Americans use health care services every year.  Since health care is costly and the vast majority of uninsured have limited financial means, many uninsured often cannot pay their medical bills.1 Recognizing the need for and importance of health care providers that care for those without insurance, the federal government, states and localities have long provided support—financial and otherwise—to help defray providers’ the costs of caring for uninsured individuals.

With the enactment of the Affordable Care Act (ACA), millions of previously uninsured individuals will gain insurance coverage through either Medicaid or private plans purchased through the health care marketplaces.  As people gain coverage, providers’ costs associated with caring for uninsured individuals that previously went uncompensated will decline, as more people have a direct source of payment (insurance) for their care.  In this paper, we take a close look at uncompensated care in 2013, just before implementation of health reform’s major coverage provisions. These estimates provide an important baseline against which to measure major changes that are occurring under the ACA. Key findings from the analysis include:

The Cost of Uncompensated Care

Over 72 million nonelderly people were without insurance coverage for either the full year (40.8 million people) or for part of the year (31.4 million people) in 2013. On average, a person who is uninsured had considerably lower annual health care expenses than a person who is insured. This difference reflects the uninsured population’s lower health services utilization rate and lower intensity of service use compared to the insured population. Compared to nonelderly people who had insurance for a full year, for whom average per capita medical expenditures were $4,876, nonelderly people who were without insurance for a full year used health care services valued at about half that amount, or just $2,443 per capita per year (see Figure 1). Nonelderly people who were uninsured for part of the year had annual medical expenditures about 30% lower than people who were insured for the full year, spending an average of $3,439 annually per capita. Part-year uninsured individuals spent more per capita than full-year uninsured individuals largely due to higher spending in the months that they had coverage. 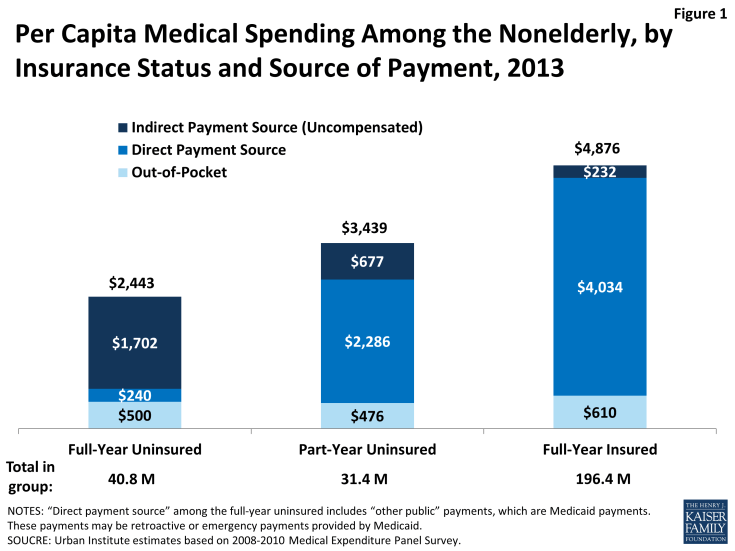 Figure 1: Per Capita Medical Spending Among the Nonelderly, by Insurance Status and Source of Payment, 2013

While full-year uninsured individuals have a small amount of their care covered by a direct payment source ($240 per year, which likely represents retroactive Medicaid payments), most of their care ($1,702 per year, or 70% of their total annual expenses) is “uncompensated,” or not linked to a direct payment source tied to an individual (such as insurance coverage). Not surprisingly, nonelderly people who are part-year uninsured have a higher amount of their annual medical expenses covered by a direct payment source (specifically, their insurance coverage for the period they were insured, which covers $2,286 per capita), but on average, $677 of medical expenses (about 20% of total per capita expenses) for part-year uninsured people are uncompensated. For people who were insured for the full year, the majority of their care ($4,034, or 83%) is covered through direct payments by their insurance. Full-year insured people have a small amount ($232) of uncompensated care covered by payments from sources other than insurance.

In aggregate, medical care spending for the uninsured population—that is, for the full-year uninsured and for the periods that the part-year uninsured population lacked coverage—totaled $121 billion in 2013 (Figure 2). Of these expenses, 21%, or $25.8 billion, were paid out-of-pocket by the uninsured. The majority of expenses (70%), however, were uncompensated, totaling $84.9 billion in uncompensated care costs in 2013. Thirty percent ($35.9 billion) was uncompensated care indirectly paid for by other private, public, or unclassified sources, and 40 percent ($49.0 billion) was implicitly subsidized care not linked to a specific funding source. 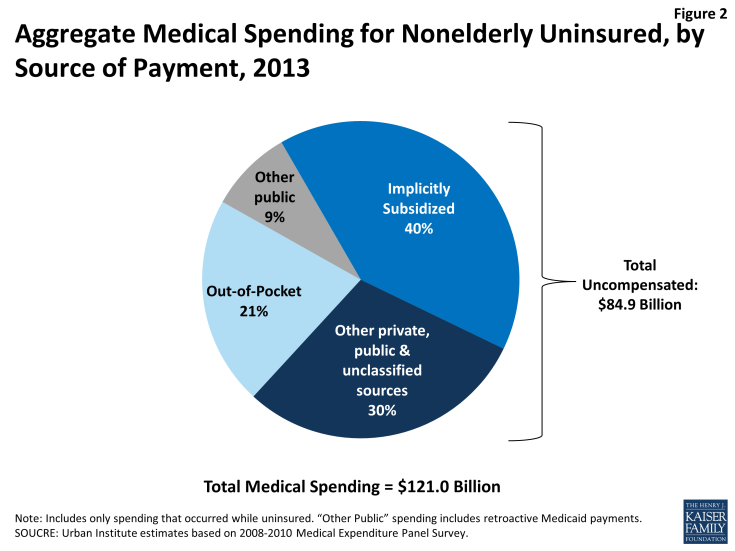 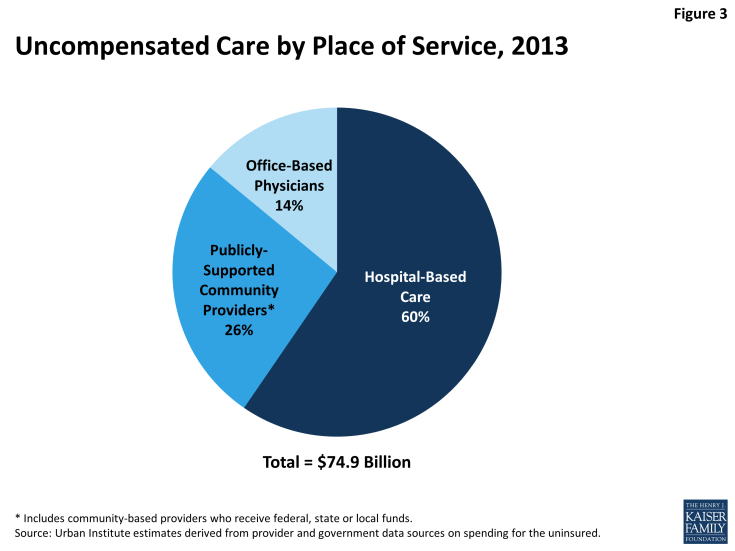 Sources of Funding for Uncompensated Care

Providers do not bear the full cost of their uncompensated care. Rather, funding is available through a wide variety of sources to help providers defray the costs associated with uncompensated care. This funding may be linked to an individual patient’s care or may be paid as a lump sum or grant to a provider.

We estimate that in 2013, $53.3 billion was paid to help providers offset uncompensated care costs. Most of these funds ($32.8 billion) came from the federal government through a variety of programs including Medicaid and Medicare, the Veterans Health Administration, the Indian Health Service, Community Health Centers block grant, and Ryan White CARE Act (Figure 4). States and localities provided $19.8 billion, and the private sector provided $0.7 billion. 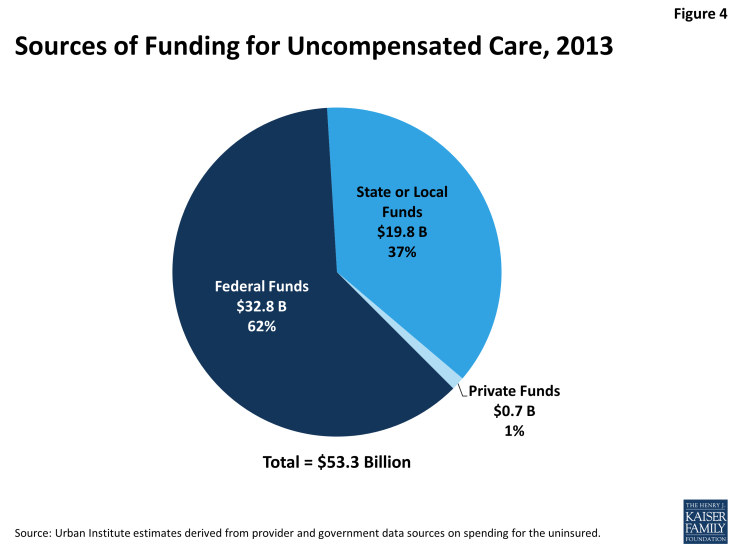 Looking at specific programs, Medicaid was the single largest source of funds to pay for uncompensated care (Figure 5). In 2013, we estimate Medicaid contributed $13.5 billion to help pay for care for the uninsured, accounting for 25.3 percent of funding, through its disproportionate share hospital (DSH) and upper payment limit (UPL) mechanisms. Through a separate DSH program and its indirect medical education spending, Medicare provided 15% of funds available for uncompensated care. At $9.8 billion, state and local appropriations for indigent care programs were the second largest funder (18%), followed by the Veterans Administration ($8.1 billion, or 15% of funding). Close behind was state and local public assistance funding at $7.3 billion, or 14%. At a much lower level, community health centers funding totaled $3 billion (6%), followed by the Indian Health Service ($2.1 billion, or 4%), Ryan White Care Act ($1.5 billion, or 3%) and Maternal and Child Health Title V Block Grant ($0.1 billion, or <1%). 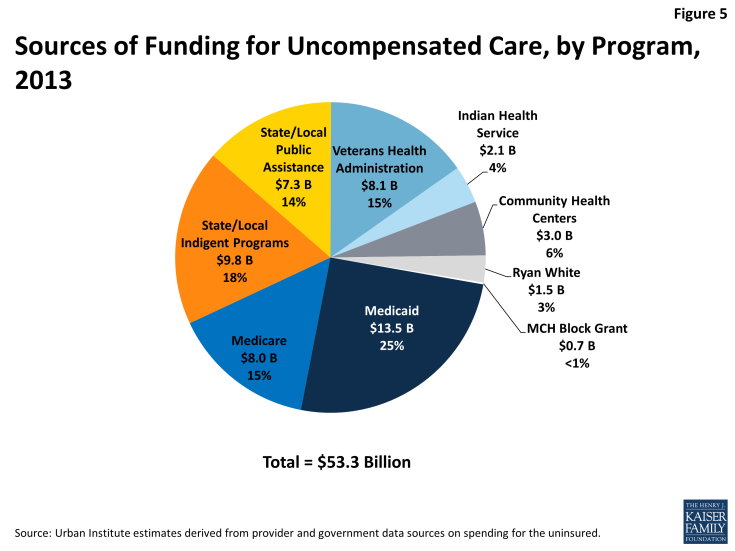 Figure 5: Sources of Funding for Uncompensated Care, by Program, 2013

While providers incur significant costs in caring for the uninsured, the bulk of their costs (about two-thirds) are compensated through a web of complex funding streams that are financed largely with public dollars. While these funding streams may offset the cost of uncompensated care in the aggregate, these funds may not be targeted to the individual providers who provide the most uncompensated care. As a result, some providers likely incur costs caring for the uninsured for which they receive little to no compensation. Thus, the system may be inefficiently making funds available to help pay for care for the uninsured.

The ACA includes a major expansion of insurance coverage, and millions have already enrolled in new plans. Based on the premise that coverage expansions under the ACA will result in fewer individuals receiving uncompensated care, the ACA also includes important provisions related to uncompensated care. Changes to DSH aim to better target Medicaid and Medicare DSH payments to hospitals; in addition, overall DSH funds will be reduced, reflecting the fact that there will be fewer uninsured individuals. However, with some states opting not to expand their Medicaid programs, and with some people remaining ineligible for coverage, it will be important to monitor how the DSH changes affect providers’ uncompensated care costs. This analysis estimated that hospitals provide the majority of uncompensated care to the uninsured, and federal payments under DSH provide a substantial amount of funding to help offset those costs. Thus, it is possible that changes to DSH will lead hospitals to reduce the level of uncompensated care they provide or to pursue aggressive billing against uninsured patients.

States and localities, which also provide a substantial amount of funding for uncompensated care, could change their spending under the ACA. Relying on the same logic that the federal government used to reduce Medicare and Medicaid DSH payments, states and localities could argue that providers will need less uncompensated care funding because more of the uninsured will have coverage through Medicaid, health insurance marketplaces or other coverage.  The benefits from the coverage expansion, however, will vary widely across states and even within areas within a state.

While the ACA holds great promise to substantially expand coverage and thus reduce the amount of uncompensated care in the system, many people will remain uninsured even after full implementation. These remaining uninsured include those left out of Medicaid expansions because their state chose not to expand; people who are ineligible for assistance because they are undocumented immigrants; and others who either do not have an affordable offer of coverage or choose to remain uninsured. As the ACA continues to roll out across the nation and as payment and delivery systems adapt to the changing policy environment, it will be important to monitor how levels of uncompensated care and funding for that care affect specific health care providers and the provision of uncompensated care for uninsured individuals.