Medicare is critical to the well-being of the nation’s seniors and people with disabilities, many of whom have low to moderate incomes, complex health care needs, and other characteristics that leave them disproportionately vulnerable.1 While the majority of Medicare beneficiaries still receive their benefits through the traditional Medicare program, 30 percent now obtain their benefits through private health plans participating in Medicare Advantage.2 As the number of enrollees in Medicare Advantage continues to climb, there is growing interest in understanding how care provided to Medicare beneficiaries in traditional Medicare and Medicare Advantage differs.Despite the considerable interest in this topic, solid analysis summarizing existing research comparing Medicare Advantage to traditional Medicare on various quality and access metrics is relatively limited. Historical reviews of performance differences across health plans have generally focused on comparisons of organizational structures (like health maintenance organizations or HMOs) rather than focusing on particular payers, like Medicare. The most widely cited reviews available have been conducted over the years by Miller and Luft, with the most recent review covering work through mid-2001.3 It concluded that the quality of care provided by HMOs was roughly comparable to traditional insurance, though it varied across health plans; HMOs used somewhat fewer hospital and other expensive resources to deliver care compared to traditional insurance, and had lower ratings by enrollees on many measures of access and satisfaction. An earlier study in the series (Miller and Luft 1997) noted that Medicare beneficiaries with chronic conditions had worse outcomes in HMOs.4

Since these reviews were published, the environment has changed considerably. The historical base of HMOs in nonprofit staff and group model plans has shifted considerably, with new growth in for-profit plans that use more decentralized provider networks that tend to be less integrated.5 Further, since the mid-2000s, the number and share of Medicare beneficiaries enrolled in private plans, now called Medicare Advantage, has increased dramatically, and while most enrollees are in HMOs, a growing number are enrolled in other types of plans, such as local and regional PPOs (Figure 1). 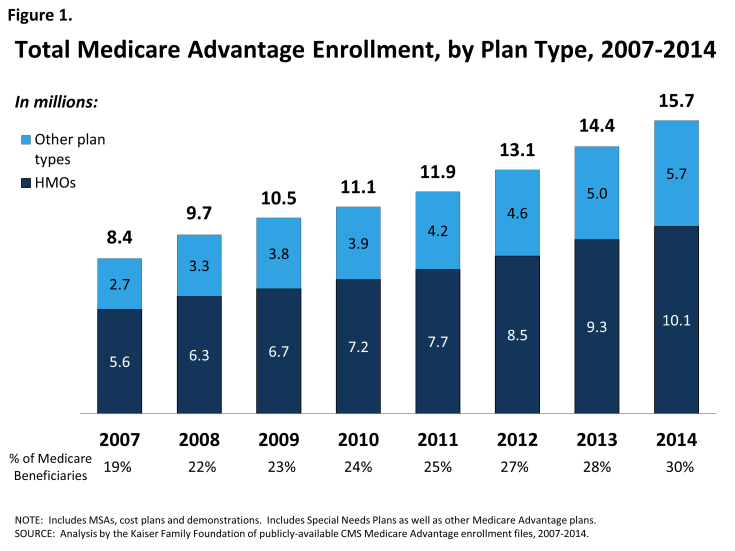 The policy environment and incentives facing providers in the Medicare program also have changed in ways that put increasing emphasis on payments that take into account performance on quality and efficiency metrics. For Medicare Advantage, the Affordable Care Act of 2010 (federal health reform law) enacted changes in payments to plans that are now being phased in, slowing the increase in Medicare Advantage payments and linking them more closely with performance on quality and other performance metrics.6 Medicare Advantage plans that score four or more out of five stars are provided bonus payments and those that score the highest (so-called “five star plans”) gain other advantages, particularly the ability to continuously enroll beneficiaries throughout the year.7 Payment to hospitals, physicians, and other providers in the traditional Medicare program also are increasingly tied to quality metrics as a result of changes in the ACA and other legislation. The ACA also improved coverage of preventive services under traditional Medicare, which has been a metric in which managed care plans have historically performed better.

Such changes increase the interest within the policy community in current information comparing the quality of care provided to beneficiaries in Medicare Advantage plans and traditional Medicare. Proponents of the insurance industry argue that quality under Medicare Advantage has improved and is better than under the traditional program – an accomplishment, they argue, that could be undermined by ongoing reductions in payments as required under the federal health reform law.8