Although outpatient prescription drugs net of rebates account for only 6% of Medicaid spending, spending on this service net of rebates increased by 25% in 2014, grew an additional 13% in 20151, and is expected to grow faster than other Medicaid services in the next 10 years.2 This growth in spending in recent years is due in part to the launch of high cost drugs, such as the hepatitis C drugs Sovaldi and Harvoni, as well as the overall growth in Medicaid spending related to the ACA expansion. Because states must balance their budgets, ongoing increased spending on Medicaid prescription drugs is a policy concern, prompting states to consider ways to reduce drug spending.3 Understanding patterns and trends in drug spending is crucial to effectively managing the benefit and developing strategies to address high drug costs.

This issue brief examines Medicaid drug spending and utilization from 2014 through 2017, the most recent complete data available. As described in more detail in Appendix B, it is based on Medicaid State Drug Utilization Data merged with Wolters Kluwer Clinical Drug Information, Inc. data to analyze trends by drug group and by brand or generic status. It also incorporates data from the Food and Drug Administration (FDA) to analyze trends among biologics. Because of data restrictions, spending does not reflect rebates. This analysis updates previous analysis of Medicaid outpatient prescription drugs.4

Under federal law establishing the Medicaid Drug Rebate Program, in order for a drug to qualify for federal statutory Medicaid matching funds, manufacturers must sign an agreement with the Secretary of Health and Human Services stating that they will rebate a specified portion of the Medicaid payment for the drug to the states, who in turn share the rebates with the federal government. In return, Medicaid must cover almost all FDA-approved drugs that those manufacturers produce.5 Because most manufacturers participate in the Medicaid Drug Rebate Program,6 Medicaid essentially maintains an open formulary in which all drugs are covered. However, state Medicaid programs can and do implement drug utilization management techniques, such as preferred drug lists and prior authorizations, to manage utilization and spending. 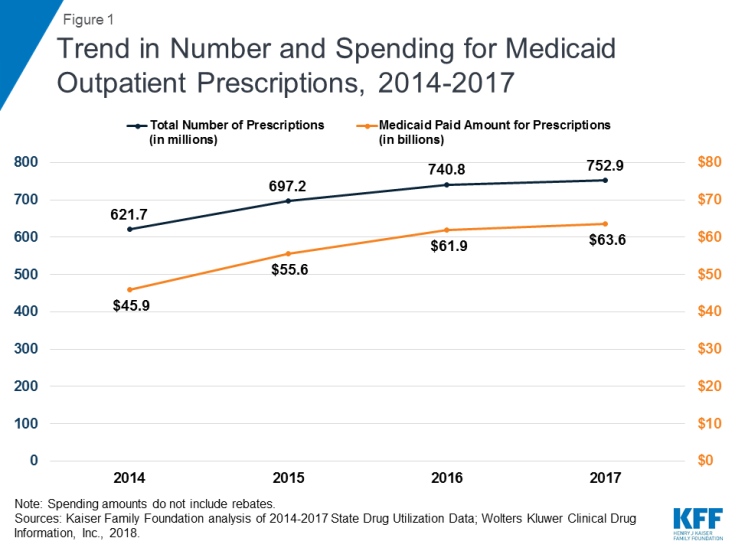 Figure 1: Trend in Number and Spending for Medicaid Outpatient Prescriptions, 2014-2017

As shown in Table 1, the ranking of drug groups by number of prescriptions is relatively stable during the period, with the same groups composing the ten most prescribed drug groups each year from 2014 through 2017. Additionally, the same groups (Antiasthmatic & Bronchodilator Agents, Opioid Analgesics, Antidepressants, and Anticonvulsants) make up the top four drug groups by utilization every year. However, in recent years, antidepressant use accounted for the largest number of prescriptions, holding the top most frequently prescribed spot from 2015 through 2017. By 2017, antidepressants account for nearly 7% of total Medicaid prescriptions. (Figure 2) Medicaid expansion at least in part explains the increased use of antidepressants, as behavioral health needs, with depression and anxiety in particular, were common amongst the expansion population, and the ACA requires that Medicaid provide behavioral health treatment.9 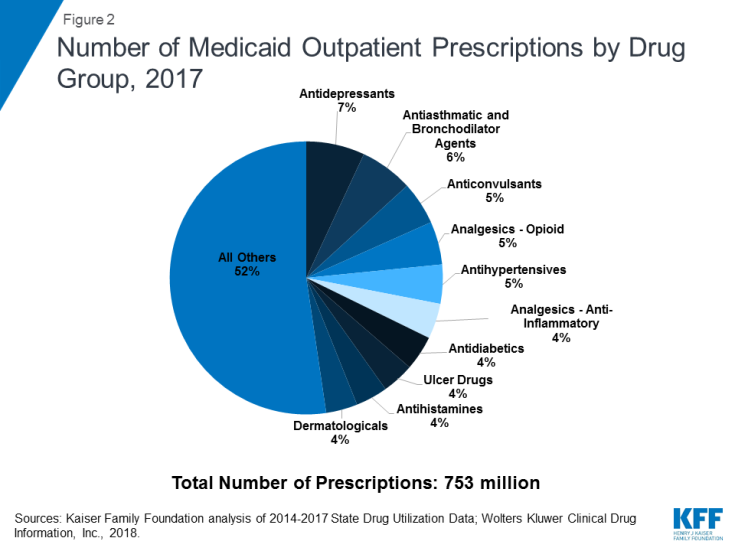 Similar to utilization, the composition of the ten most costly drug groups is relatively stable over the period, with eight of the ten groups being the same every year. (Table 2) During the period of study, antivirals accounted for the largest share of drug spending in all years, and antidiabetics grew as a share of spending to account for the second largest share of spending by 2017. (Figure 3) Although order changed, the other three groups in the top five most costly drug groups remained the same over the study period: Antipsychotic/Antimanic Agents, Antiasthmatic & Bronchodilator Agents, and ADHD/Anti-Narcolepsy/Anti-Obesity/Anorexiants. Additionally, four of the most prescribed drug groups are also four of the most costly drug groups each year: Antiasthmatic & Bronchodilator Agents, Antidiabetics, Anticonvulsants, and Dermatologicals. 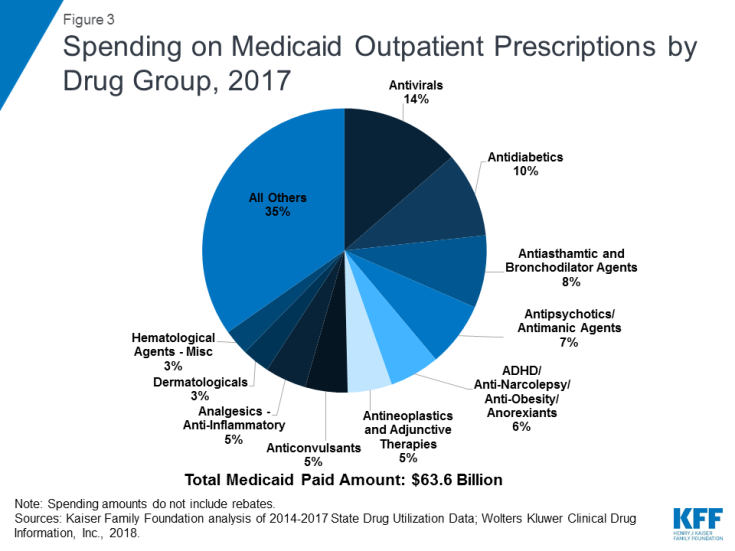 Over the entire period, antivirals are consistently the most costly drug group, accounting for 14% of Medicaid outpatient drug spending in 2017. (Figure 3) Drugs used to treat HIV, also called antiretrovirals, and hepatitis C drugs drive Medicaid spending on antivirals. Together these subclasses account for more than 90% of Medicaid antiviral spending before rebates. (Figure 4) Spending on antivirals is disproportionate to their utilization (they are not among the top ten most frequently prescribed drug groups) and reflects the high cost of these drugs as well as Medicaid’s important role in providing treatment for HIV and hepatitis C. Medicaid is the largest source of coverage for people with HIV, covering over 280,000 people, or an estimate of more than 40% of people with HIV.10,11 Of the up to 5 million people in the U.S. with hepatitis C, a disproportionate number are enrolled in Medicaid.12 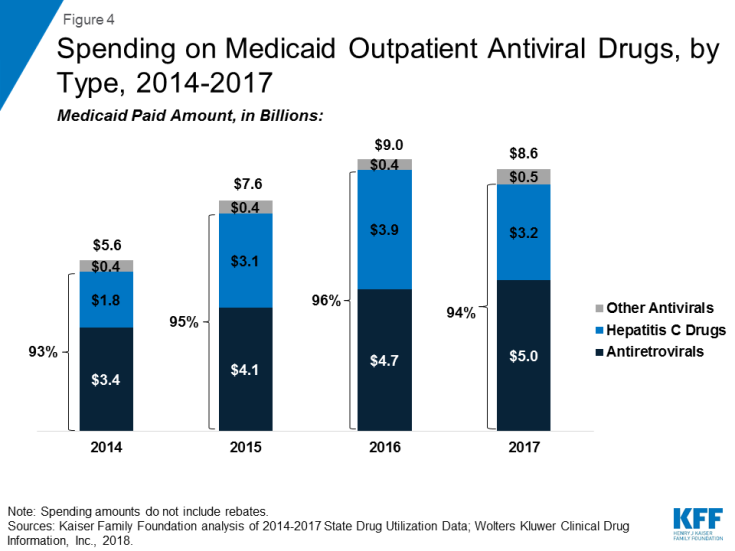 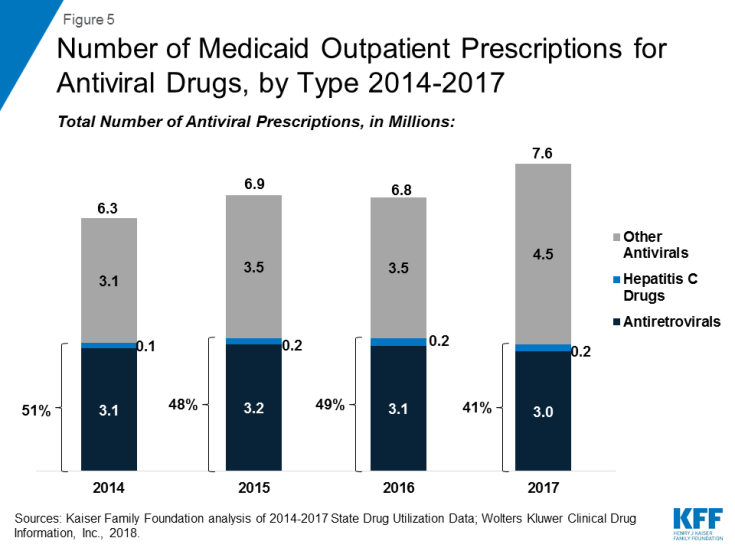 Opioid analgesics were widely prescribed during the period of study, being among the top four drug groups every year. In part, this reflects the widespread use of opioid painkillers across all payers during the period.14 However, opioids as a share of total number of Medicaid prescriptions declined over time. Further, in addition to drugs used to treat pain, this drug class includes buprenorphine, which is used to treat both pain and drug addiction.15 Buprenorphine composes a growing share of opioid analgesic prescriptions during the period at 6% in 2014 and 14% in 2017. If we examine the opioid analgesics aside from buprenorphine, the number of opioid analgesics prescriptions falls from a high of 39.8 million in 2015 to 33.2 million in 2017, a 17% decline. (Figure 6) Despite their relatively high share of prescription volume, opioids analgesics account for a smaller share (but still a top ten drug group) of Medicaid spending, due to their relatively low per prescription cost. In addition, consistent with trends in utilization, opioids dropped as a share of Medicaid outpatient drug spending over time. (Table 2) 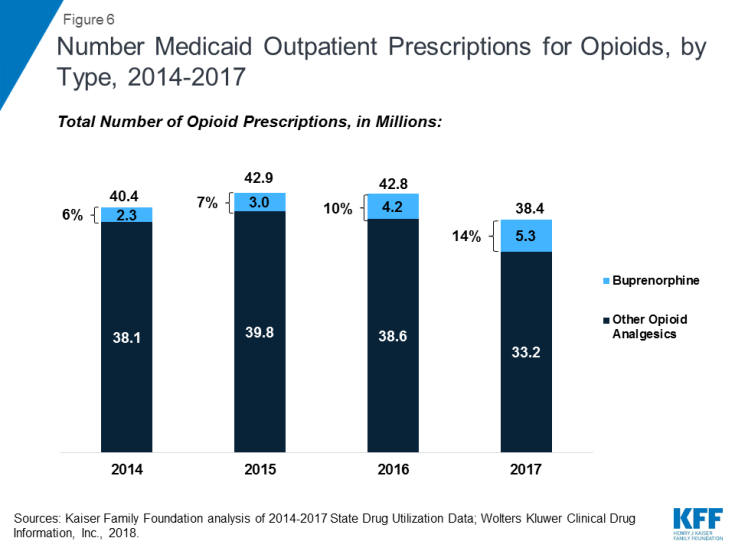 While antidiabetic use grew by 42% over the period of study, spending for the group nearly doubled, resulting in spending per prescription increasing from $148 in 2014 to $199 in 2017. (Appendix Tables A1 and A2 and Figure 7) By 2017, antidiabetic drugs were the second most costly drug group. (Figure 3) The increase in antidiabetic spending in Medicaid is largely due to the price increases of insulins over this time period. Although there have been advances in insulin since the discovery of the drug in 1921, the base form has remained largely the same since then.16 However, because of the way the drug is manufactured and regulated, there are no generic versions of insulin.17 In addition, three manufacturers, Eli Lilly, Novo Nordisk, and Sanofi Aventis, produce over 90% of the market and have increased the price of insulin over time since 2002, sometimes simultaneously.18,19,20 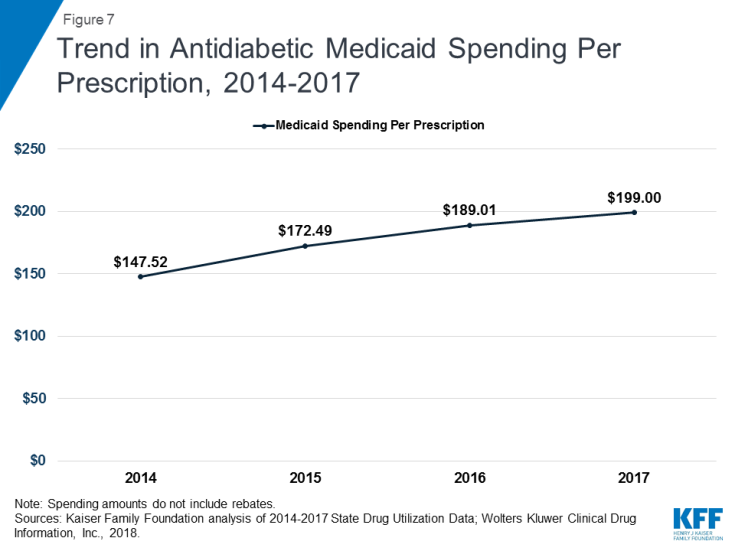 Since the 1984 Hatch-Waxman Act, drug manufacturers have been able to obtain FDA approval for generic equivalents of brand-name drugs through an expedited process, as long as the generic drug is therapeutically equivalent to a drug on the market that had received FDA approval through the more rigorous application for a new product. To balance out increased competition from generic manufacturers, the FDA has power to grant exclusivity periods for brand name drugs approved through the more rigorous pathway. Regulatory exclusivity provides manufacturers with a degree of market exclusivity, enabling them to price the drug with no market competition.

Because generic drugs are lower cost, but still therapeutically equivalent to their corresponding brand drugs, state Medicaid programs implement policies to encourage use of generic drugs where possible. From 2014 through 2017, most state Medicaid programs required generic substitution in their FFS programs when the equivalent brand name drug was prescribed, unless the prescriber had written “Brand Medically Necessary” on the prescription or the state included a more restrictive requirement.21,22

As seen in Figure 8, generic drugs accounted for the vast majority of prescription drug volume in Medicaid from 2014 through 2017. In addition, the average annual increase in number generic prescription drugs covered through Medicaid outpaced the increase in the number of brand name drugs leading to a small increase in generic drugs’ share of total prescription volume (from 84% to 86%). However, as seen in Figure 9, generic drugs accounted for a relatively small share of Medicaid spending on drugs before rebates from 2014 through 2017, and this share declined slightly over time (from 25% to 21%). This growth in brand spending despite larger increases in generic volume reflects national trends caused by the launch of expensive new drugs during the period. While other drugs have lost exclusivity over this period, the savings due to introduction of competition for those drugs are not keeping pace with the increased spending from the new drugs launching.23 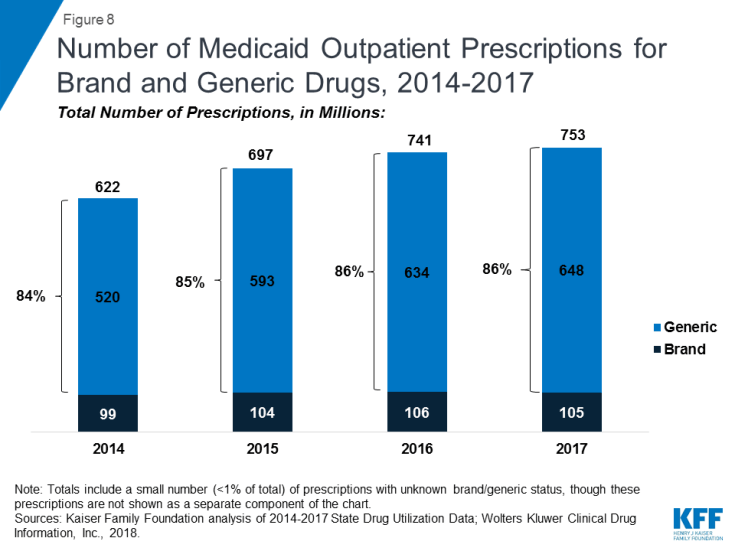 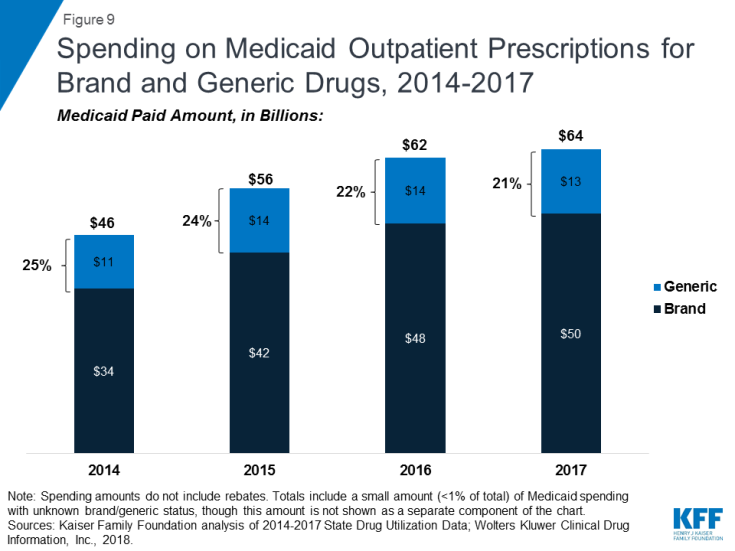 Biologics are products, such as drugs or vaccines, derived from living organisms with chemical structures more complicated than traditional small molecule drugs. As a result, the FDA licenses biologics through a different process than it uses to approve small molecule drugs.24 As part of the ACA, Congress created a pathway for the FDA to license biosimilars, products that are deemed “highly similar” or “interchangeable” with a referenced biologic.25

Biologics tend to be priced expensively and face less competition from biosimilars than small molecule brand drugs face from generics. Additionally, although biosimilar competition does lower the price of biologics, it does so to a lesser degree compared with the effect of generic entry on small-molecule drug market.26 As a result, across the entire period, the amount Medicaid spends before rebates on biologics is outsized compared to the number of prescriptions that Medicaid fills. While biologics consistently account for less than 1 percent of Medicaid outpatient prescriptions every year, they account for between 11% and 14% of Medicaid spending on prescriptions before rebates over the period. (Figure 10) 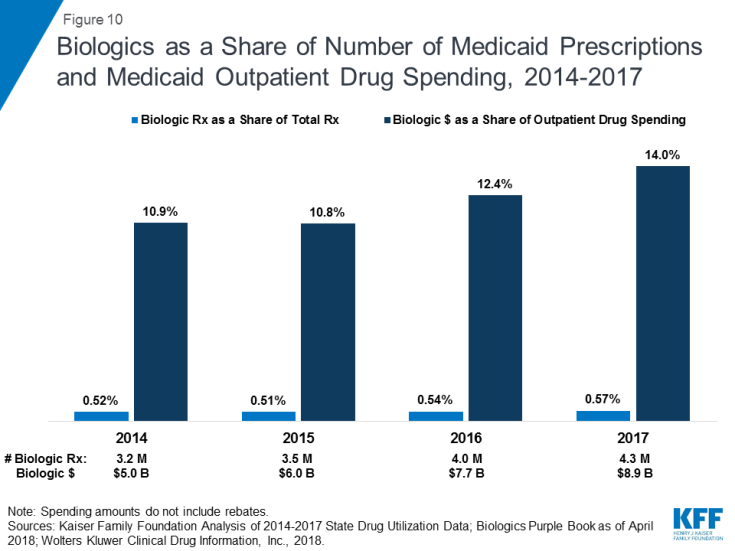 Figure 10: Biologics as a Share of Number of Medicaid Prescriptions and Medicaid Outpatient Drug Spending, 2014-2017

As Medicaid drug spending is expected to grow faster than most other components of the program, policy makers are looking into ways to generate savings in the pharmacy benefit. Medicaid directors are concerned about the launch of expensive new prescription drugs.27 States have been able to negotiate higher rebates for hepatitis C drugs due to competition within the class, but they remain concerned about other high cost drugs such as hemophilia factor, oncology, mental health and HIV/AIDS drugs.28 Policymakers are also expressing concern about insulin, common antibiotic prescriptions that have been rising in price. About 30 million Americans have either type 1 or type 2 diabetes, and the prevalence of the disease is expected to grow.29 Because of both the cost and the rising prevalence of diabetes, the cost of insulin has become a touchstone, and state and federal lawmakers, attorneys general, and other parties have been examining the topic, writing legislation, and filing lawsuits.30 In reaction to the growing concern about Medicaid drug costs, there has been a fair amount of action at the state level, such as the implementation of New York’s drug spending cap in April 2017,31 Oklahoma’s value-based contracts for specific drugs,32 and Louisiana’s steps towards a subscription payment model for hepatitis C drugs.33

At the federal level, Congress is considering how the Medicaid Drug Rebate Program interacts with alternative payment structures, such as value-based payments.34 In addition, the FDA has taken steps and announced plans to increase competition among generics35 and biosimilars.36 In 2016, 2017, and 2018, the FDA approved record numbers of generic drugs.37 However, while biologics remain expensive, and many biosimilars have been approved in the past several years, as of yet, only four biosimilars have come to market. In general, the effects of actions at the federal level, both in terms of new bills and FDA activity, remain yet to be seen.