Uncompensated Care for the Uninsured in 2013: A Detailed Examination

The MEPS is a household survey that is nationally representative of the U.S. civilian non-institutionalized population.1 Consequently, it does not include individuals staying in nursing homes or long-term hospitals, those with long stays in acute-care hospitals, those in the military or people in correctional facilities. It has a rotating panel design, where each panel covers two complete calendar years with five rounds of data collection. Each panel is selected from a subsample of households participating in the National Health Interview Survey (NHIS).

The MEPS Household Component (HC) collects information on medical expenditures directly related to a respondent from a specific source. As a result, indirect payments not related to respondents’ specific medical events are not included in the MEPS. Examples of indirect payments include disproportionate share payments, grants, and tax appropriations. MEPS also does not collect expenditures on over-the-counter items or phone contacts with providers.

In addition to the HC, the Medical Provider Component (MPC) is a follow-up survey, which links select respondents’ information on medical use with medical providers. It collects information such as dates of visit, type of use, charges and expenditures for health care services by payer. It is used as a source from which to impute data in the HC, in order to improve self-reported data as well as estimate service expenditures for individuals covered by plans with capitation payments.

Medical expenditures in the MEPS are disaggregated by source of payment. Standard sources include private insurance companies, Medicare, Medicaid, and payments made by the respondent (out-of-pocket expenditures). Additional categories, referred to here as “other private, public and unclassified sources,” include the other private sources, Veterans Health Administration, Tricare, other federal sources, other state and local sources, workers compensation, other unclassified sources.

The MEPS captures less aggregate medical expenditures than the National Health Expenditure Accounts (NHEA) data, which is considered the standard for aggregate medical expenditure estimates for the entire U.S. This discrepancy between the MEPS and the NHEA persists even after accounting for differences in populations across sources, as well as differences in medical expenditure categories collected.2 For example, the MEPS is limited to the civilian non-institutionalized population, whereas the NHEA data covers all individuals—including those in nursing homes, correctional facilities, and the military that are excluded from the MEPS.3 Examples of expenditure categories in the NHEA that are not in the MEPS include non-durable medical products (i.e., “over-the-counter” items), nursing home care, public administration, and research. After accounting for these differences, previous work estimates that the MEPS collects between 13.8 percent (Sing et al., 2006) and 17.6 percent (Bernard et al., 2013) less expenditures than the NHEA data.

We apply a reconciliation adjustment to the pooled MEPS expenditure data in order to more closely reflect the NHEA aggregate expenditure totals. Using information reported in Sing et al. (2006), we calculate adjustment factors for payments by private insurance, Medicaid, Medicare, and all other sources (defense, Veterans’ Affairs, workers’ compensation, other public, and other sources) and apply them to the corresponding expenditure categories in the MEPS. These factors are reported in Table A1. Note that there is no adjustment for out-of-pocket expenditures. This is because the NHEA does not directly measure this category of expenditures—it is a residual—whereas the MEPS collects this information directly from respondents. That is, we assume the out-of-pocket expenditures collected in the MEPS are more accurate.

The decision to use adjustment factors from Sing et al. (2006), and not Sing et al. (2013), was a result of how the factors change between studies, notably “all other sources.” Using Sing et al. (2006) it is equal to 0.977 (see Table A1) compared with 1.294 using Sing et al. (2013). This large increase stems from a disproportionate decrease in workers compensation expenditures collected in the MEPS compared with the NHEA data between these two studies.4 Furthermore, the contribution of workers’ compensation to the uncompensated care estimate (calculation defined below) is relatively small, while the contribution of the collective group “all other sources” to the uncompensated care estimate is large. Consequently, the “all other sources” adjustment factor equal to 0.977 results in a more conservative estimate of uncompensated care. Finally, the remaining adjustment factors changed relatively little between studies.

Two additional adjustments were imposed on the MEPS in order to project uncompensated care for the 2013 population. This is because the data used in this study represents the populations corresponding to calendar years 2008, 2009 and 2010, pooled together, which were the most recent MEPS data available at the time of the analysis. The first adjustment targets the 2013 population total, and the adjustment factors are reported in Table A2. The second adjustment attempts to account for changes in both the price and quantity of medical use per person between 2008 through 2010 and 2013. These factors also are reported in Table A2 and are calculated from the NHEA per capita personal health care expenditures, historical data and projections.5

While the adjustments described above account for population growth and increases in per capita medical expenditures, they do not account for changes in broader underlying economic relationships. In particular, the reference period for our data (2008-2010) in part covers the great recession (December 2007 to June 2009), and the initial recovery. Should there be significant differences in 2013 population compared with that of 2008-2010—e.g., unemployment, poverty/family income, rate of uninsured—they will not be accounted for in the 2013 uncompensated care projections reported here.

In this work, medical expenditures during months respondents report that they were uninsured are distinguished from months while insured. We combine the monthly self-reported health insurance data in the MEPS-HC with monthly expenditure data (by service and payer) located in the MEPS events files to make this distinction. In a small number of cases, respondents’ reported they were uninsured in a given month, but  have corresponding expenditures from private insurance, Medicaid, or Medicare. This may occur due to reporting error on insurance coverage. We reclassify such expenditures as those while insured.

“Implicitly subsidized care” is defined here as care received when a person is uninsured but not paid for by a directly identifiable source linked to the patient. Such payments include indirect payments to providers, from private or public sources, that partially offset the cost of medical care provided to the uninsured. Examples of implicitly subsidized care include public and private grant programs and Medicare and Medicaid disproportionate share (DSH) payments. As these payments are not tied to a particular individual, they are not measured in the MEPS. 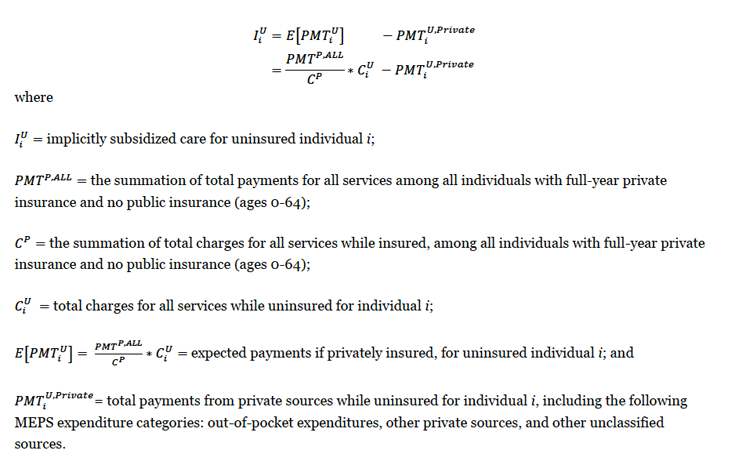 We define total “uncompensated care” as the costs associated with implicitly subsidized care (described above) plus expenditures from indirect sources made on behalf of the uninsured. These indirect sources, which we refer to as “other private, public, and unclassified sources,” include a wide range of payers such as the Veterans Administration, the Indian Health Service, local and state health departments, as well as automobile and homeowner’s insurance.6 Specifically, the MEPS expenditure categories included are VA, workers’ compensation, other federal, other state and local, other private, and other unclassified sources.  These payments are included in the calculation of uncompensated care as they are indirect sources, which would most likely have been paid by a health insurance plan, private or public, had the individual been insured. The calculation of uncompensated care assumes that payments from other sources are paid at 100 percent, and any discrepancy between charges corresponding to these sources and expected private payments represent a contractual discount accepted by the provider.

The sources of payment  included in “other private, public, and unclassified sources” excludes payments from private insurance, the respondent (i.e., out-of-pocket), Medicare, and Medicaid.7 Payments corresponding to the MEPS expenditure category “other public” are also excluded, which is sometimes linked to uninsured individuals.8 This “other public” category is actually Medicaid expenditures, for which in theory there should be none for our study sample of individuals who report being uninsured.9 That we find some Medicaid expenditures (defined by MEPS as “other public” expenditures) for periods in which an individual reported being uninsured may reflect a presumptive Medicaid eligibility decision on behalf of medical providers and/or reporting error made by respondents.10