Requirements for Individuals to Have Coverage

Individuals will be required to report health coverage on their 2014 taxes. The individual mandate is enforced through the tax filing process. For the first time, tax filers must document that they had insurance coverage during the year when they file their 2014 taxes. If they did not and they do not qualify for one of the exemptions, they will be assessed a penalty in the form of an additional tax for the months in which they did not have health coverage. Those who were uninsured during 2014 can request certain exemptions when they file their taxes (e.g., for unaffordable coverage, short gaps in coverage, or member of an Indian tribe), while other exemptions must be obtained through the health insurance Marketplace (e.g., for hardship exemptions, religious objections). On February 20, 2015, HHS announced there would be a one-time special enrollment period allowing people who first learned of the penalty for not having insurance when they filed their taxes to enroll in coverage through the Marketplaces. This special enrollment period for the federal Marketplace will run from March 15, 2015 through April 30, 2015. Many states running their own Marketplaces have announced or are considering similar special enrollment periods.

The IRS estimates that roughly 30 million taxpayers who lacked coverage for some or all of the year will qualify for an exemption in 2014, while 3 to 6 million will owe a penalty for not having insurance. The IRS also estimates that 75% of 2014 taxpayers will have had minimum essential coverage for the entire year and so will be able to check a single box on their tax form indicating they complied with the individual shared responsibility requirement. Separately, the Congressional Budget Office (CBO) estimates that about four million people will pay a penalty for not having insurance in 2016, and approximately $4 billion in penalty payments will be collected that year.3

Beginning in 2015, large employers are required to provide coverage to full-time employees or face a penalty. In 2015, employers with 100 or more full-time equivalent employees will be assessed a fee up to $2,000 per full-time employee (in excess of 30 employees) if they do not offer coverage to at least 95% of full-time workers and their dependents (defined as children up to age 26; does not include spouses) and if they have at least one employee who receives a premium tax credit through a Marketplace. Final regulations issued by the IRS provide transition relief to these large employers in 2015: employers are only subject to the penalty if they do not offer affordable coverage to 70% of full-time workers; and the penalty payments is calculated as up to $2,000 per full-time employee minus up to 80 employees.4 These requirements go into effect for employers with 50-99 full-time equivalent employees in 2016. To avoid penalties, employers must offer insurance that pays for at least 60% of covered health care expenses, and the employee share of the premium must not exceed 9.5% of family income. This requirement does not apply to employers with fewer than 50 workers.

Firms with large shares of low-wage workers are less likely to offer health coverage, and as a result, may have more difficulty meeting the employer requirements. According to data from the Kaiser/HRET Survey of Employer-Sponsored Health Benefits, among firms with 100 or more employees where 35% or more of workers earn $23,000 a year or less, 74% offer health insurance to workers compared to 96% of firms with a low share of low-wage workers (Figure 3).5 In addition, fewer workers in firms with a large share of low-wage workers are eligible for coverage if it is offered (workers may not be eligible for coverage because of waiting periods or because they do not work enough hours per week). 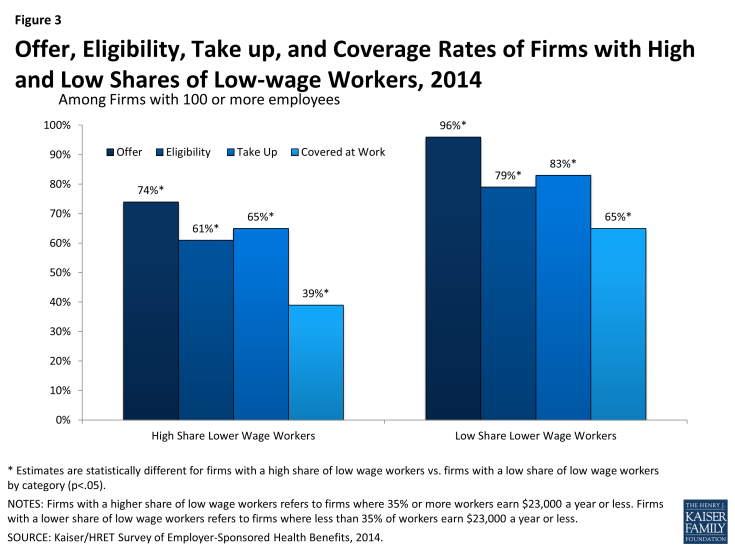 Figure 3: Offer, Eligibility, Take up, and Coverage Rates of Firms with High and Low Shares of Low-wage Workers, 2014