These additional findings were released October 7, 2020.

The latest release from KFF and The Cook Political Report’s Sun Belt Voices Project looks at what is motivating the vote choices of both Black and Hispanic voters in Arizona, Florida, and North Carolina – three key battleground states. While larger shares of Black and Hispanic voters report being impacted by the coronavirus, either by knowing someone who has gotten sick or by losing their income or job, it is no more of a voting issue for voters of color than it is for White voters. And while majorities of Black voters across the three states say they are voting for Vice President Biden, Hispanic voters in Florida and Arizona have different voting plans with Biden garnering majority support in Arizona and President Trump leading among Florida Hispanic voters.

Black and Hispanic people in the U.S. have been disproportionately impacted by the coronavirus outbreak both in terms of the share of populations who have been hospitalized or died due to COVID-19 or reported that they lost their job or income because of a coronavirus-related layoff. Black and Hispanic voters in Arizona, Florida, and North Carolina are no exception with three-fourths of Black voters (77%) and eight in ten Hispanic voters (81%) in these states saying they know someone who has either tested positive for coronavirus or thought they had it, compared to two-thirds of white voters. 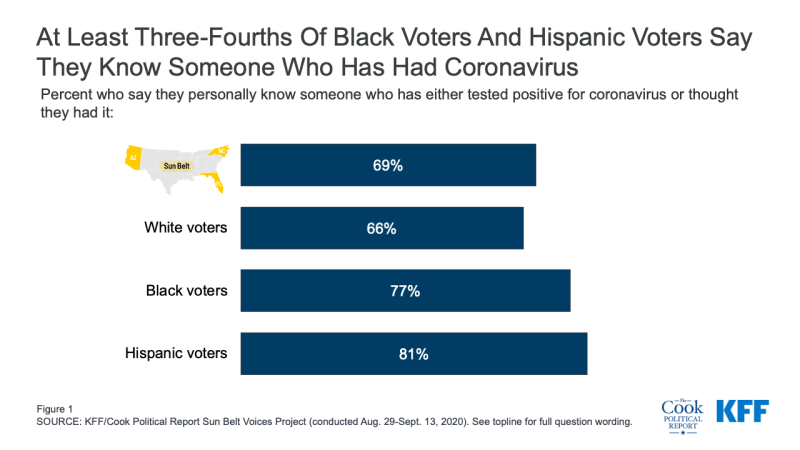 Figure 1: At Least Three-Fourths Of Black Voters And Hispanic Voters Say They Know Someone Who Has Had Coronavirus

In addition, nearly four in ten Black (36%) and Hispanic voters (41%) say they have lost a job or income due to the coronavirus compared to three in ten White voters (28%). Black voters are also more likely than White or Hispanic voters to say that both the health impacts and economic impacts of the coronavirus have been “worse for people of color.” Majorities of White voters say the impacts of coronavirus on White people and people of color have been about the same. 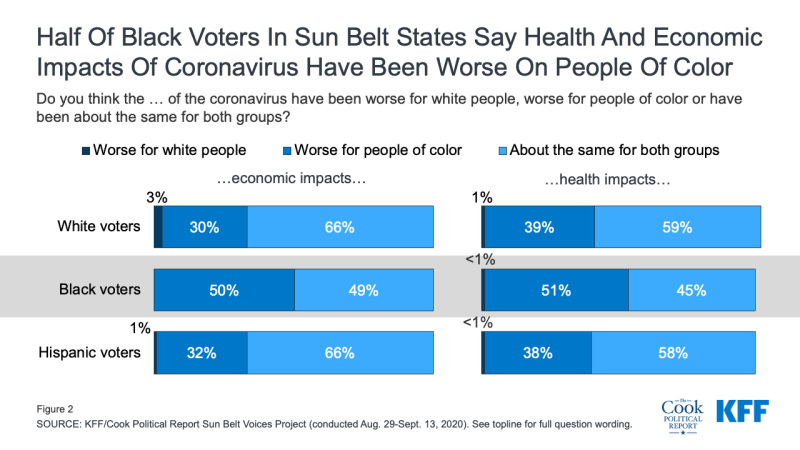 Figure 2: Half Of Black Voters In Sun Belt States Say Health And Economic Impacts Of Coronavirus Have Been Worse On People Of Color 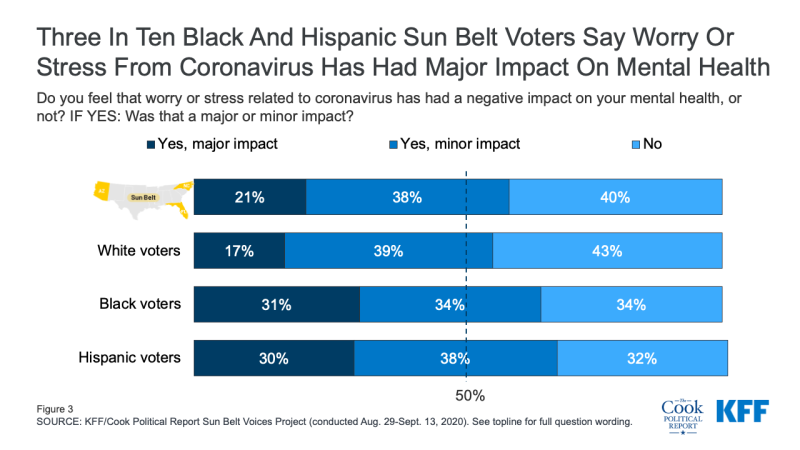 Figure 3: Three In Ten Black And Hispanic Sun Belt Voters Say Worry Or Stress From Coronavirus Has Had Major Impact On Mental Health

What Is Driving Black Voters and Hispanic voters?

Yet, Black and Hispanic voters in these Sun Belt states are no more likely to say coronavirus is an important issue to their 2020 vote choice than White voters. About one in six Black voters (14%), White voters (16%), and Hispanic voters (15%) say the coronavirus outbreak is the most important issue to their 2020 presidential vote. Other issues, most notably, the economy rank higher. The economy is among the top issues for voters across racial groups but a larger share of Black voters also say race relations (29%) is the top issue driving their 2020 vote choice compared to one in ten White and Hispanic voters (9%). This is in light of recent protests in response to police shootings of unarmed Black Americans and President Trump’s focus on “law and order.”

Which Candidate Do Black Voters and Hispanic Voters Support?

The majority of Black voters in the Sun Belt states (75%) say they plan on voting for Joe Biden in the November presidential election and few (5%) say they plan on voting for President Trump. This is consistent with Black adults’ views of President Trump throughout his presidency, in which he has never garnered higher than 25% favorability among Black adults in the past 3 and a half years.

Florida and Arizona are two battleground states with Hispanic voters increasingly making up larger shares of the electorate with one in four 2018 voters in Arizona identifying as Hispanic as were two in ten Florida voters.

Now, six in ten Hispanic voters in Arizona say they are either “probably” or “definitely” going to vote for Joe Biden (61%) with 18% say they are going to vote for President Trump, another 16% are undecided. In Florida, Hispanics are more divided but lean in favor of former Vice President Biden. About half of Hispanic voters in Florida (46%) say they plan on voting for Joe Biden while 37% say they plan on voting for President Trump, which is within the margin of sampling error for this small subgroup of voters. 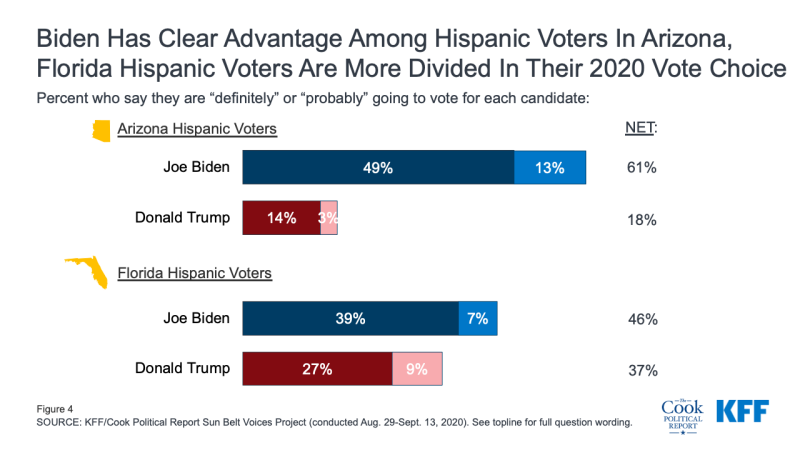 There are many reasons why Hispanic voters in Arizona and Florida have different 2020 presidential vote preferences as there are significant demographic differences between the two voting groups including their education levels, their nativity, and their party affiliation. 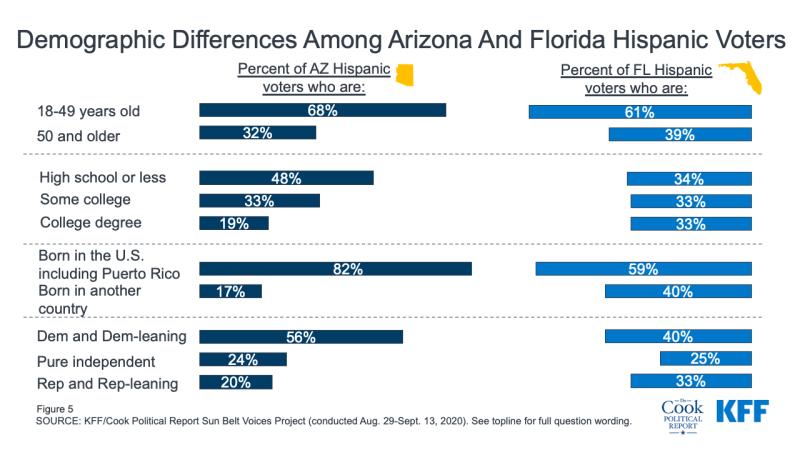 How Voters Plan To Cast Ballots

A previous KFF and The Cook Political Report release analyzed how voters planned to cast ballots in each of the three Sun Belt states. When we look at how people plan to vote among different racial and ethnic groups we find about one-fourth of Black voters saying they plan to vote by mail or absentee (27%) compared to one-third of White voters, and four in ten (39%) Hispanic voters. Black voters, especially in Southern states, have historically been more likely to show up to vote in-person but with the coronavirus pandemic upending usual voting behaviors, it is important to better understand how people plan to vote. The latest data from North Carolina’s State Board of Elections, compiled by Michael McDonald of the University of Florida, finds that while similar shares of White and Black voters have begun returning ballots in North Carolina, the rate at which the ballots are being rejected for error is larger among Black voters.

How Votes Will Be Cast in 2020 Arizona Crosstabs